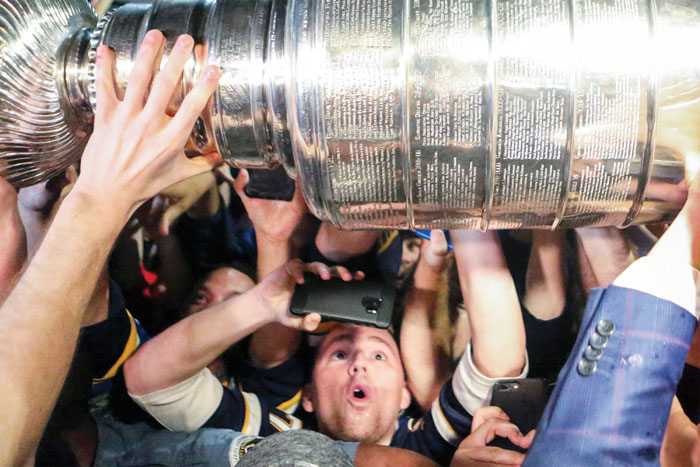 Fans reach out to touch the Stanley Cup after the St. Louis Blues NHL hockey team arrived at the airport in St. Louis early Thursday, June 13, 2019. The Blues defeated the Boston Bruins 4-1 in Game 7 of the Stanley Cup finals to win their first NHL championship Wednesday night in Boston. (Colter Peterson/St. Louis Post-Dispatch via AP)

ST. LOUIS (AP) — At age 100, Marge Kirchhoefer is among the oldest St. Louis Blues fans and now that they are Stanley Cup champions, she knows exactly how she will celebrate.

“It’s too good to be true,” Kirchhoefer said. “I have friends and we all party together. We’re going to drink champagne. I may get loaded! I don’t care.”

There’s a lot of that going around in St. Louis, now that the Blues have knocked off the Boston Bruins to win their first NHL championship since they arrived as an expansion team 52 years ago. The  4-1 win in Game 7 on Wednesday night in Boston set off a wild celebration that lasted well into Thursday morning.

And why not? After all, it’s been a long wait for Blues fans and a difficult few years for St. Louis sports enthusiasts in general.

Until this year, the Blues had never won a game in the Stanley Cup Final. They had not even reached the final since 1970, the last in a three-year championship series run that ended with the still-new Blues a lowly 0-12 — swept twice by Montreal and then once by the Bruins.

Since those long-ago days, St. Louis lost two NFL franchises — the Cardinals to Arizona in 1988, and the Rams to Los Angeles in 2016. To justify a move that appeared on the surface to violate league guidelines, an attorney for Rams owner (and Missouri native) Stan Kroenke wrote a scathing and widely disputed report that painted St. Louis as an economic hellhole for sports franchises.

St. Louis’ beloved Cardinals won World Series titles in 1982, 2006 and 2011, and National League pennants in 1985, 1987, 2004 and 2013. But they’ve missed the playoffs three straight years and have been only so-so this season. The Cardinals find themselves in the unusual position of taking a backseat.

The Blues are the toast of the town.

A parade on Saturday will honor hockey’s new champions and up to 1 million people are expected to line downtown streets, followed by a rally beneath the Gateway Arch.

Such a celebration seemed like only a pipe dream six months ago.

On Jan. 3, midway through the season, the Blues had the worst record in the NHL. Coach Mike Yeo was fired in November and things really weren’t getting much better under interim coach Craig Berube.

Then a 25-year-old rookie goalie, Jordan Binnington, was called up and began to dominate. The team in front of him slowly took on the tough, hard-nosed exterior of Berube, a former NHL enforcer. The Blues not only made the playoffs but beat Winnipeg, Dallas and San Jose to earn a shot at the Cup. After missing out on a chance to clinch the championship at home Sunday, the resilient Blues won in Boston for the third time in the series.

Kirchhoefer said she sometimes watches games with her grandson’s family, a home where the Blues reign so supreme that they have a goal light in the living room. When the Blues score a goal, the light goes off and a siren sounds.

“It’s just like being there,” Kirchhoefer said. “I get goose pimples when those games get so close. Oh my!”

Kirchhoefer, who worked as a petroleum company office manager before retiring in 1984, used to attend games with her late husband, Frank, who died in 2002. Her love of the team grew watching the enthusiasm of her grandson, who hunts for arrowheads and sells them to pay for tickets.

“This is once in a lifetime,” Kirchhoefer said. “They (the Blues) tried so hard, from being way on the bottom and coming up like that. It was wonderful.”

ST. LOUIS (AP) — A parade 52 years in the making will finally happen Saturday in St. Louis, when the city celebrates the Blues’ first-ever Stanley Cup championship.

The Blues defeated the Boston Bruins 4-1 in Wednesday’s Game 7 in Boston. The Blues joined the NHL as an expansion team in 1967 and had never before won a championship.

The Blues took to Twitter Thursday to announce celebration plans. A parade will start at noon at 18th and Market Street and head east. A rally will then take place beneath the Gateway Arch.

Fans attending the celebration may want to bring an umbrella. Rain is in the forecast.

Missouri Gov. Mike Parson also says the state Capitol dome will be lit up with blue lights in celebration Thursday.

The best came last weekend at Brio Tuscan Grille, one of his favorite spots as St. Louis began to feel like home.

“They were good to me,” Binnington said.

Binnington has been so good for the Blues that fans of the long-suffering franchise might never let him pay for another meal again. Drafted in the third round, shuffled to the bottom of the Blues’ goalie chart and even farmed out to Boston’s top minor league affiliate, Binnington’s comeback is one for the ages: The 25-year-old rookie led the Blues from dead last in the NHL to the first championship in franchise history.

He turned out to be the perfect backstop for the bruising Blues, a quiet anchor to rally around for a six-month run to the title. There was nowhere to go but up.

Binnington spoke not long after a 4-1 victory over the Bruins in Game 7 on Wednesday night. Stunned to be standing there with the Stanley Cup, Binnington wondered aloud, “I can’t believe we’re here now?”

He led them here. Beginning with a shutout in his first NHL start Jan. 7 in Philadelphia, Binnington went 24-5-1 with a 1.83 goals-against average and a .930 save percentage.

“The first game he gets a shutout in Philly and you’re hoping,” general manager Doug Armstrong said. “You keep watching and wondering, ‘Is this real?’ Water usually finds its level. Well, his water level is very high. I would say you’re into mid-February and March and he’s a rock of our team. … He’s a well-deserving champion.”

St. Louis’ run coincided with Binnington’s arrival and concluded with him stopping 32 shots in Game 7. Coach Craig Berube called it Binnington’s best game of the series.

“(He’s a) great goaltender,” Conn Smythe Trophy winner Ryan O’Reilly said. “If we keep (shots) to the outside, he’s going to be making those saves.”

Making saves without looking flashy is what Binnington does best. He isn’t frantic in his play and exudes confidence that O’Reilly believes flows to the rest of the team.

“This group just got closer and closer as we went on,” Binnington said. “They welcomed me in well and I just tried to do my job, battle and keep my mouth shut.”

Showing just how many elder Blues players hadn’t won the Cup, Binnington was the 14th player to receive the trophy after captain Alex Pietrangelo handed it off. That’s hockey, and everyone on the roster knows Binnington led the way when it mattered. He went 7-2 in the playoffs following a loss and earned a tremendous amount of respect from teammates for how he handled so much time in the minors before getting to this point.

“He hasn’t been given the greatest hand. He hasn’t been given an easy route to get here,” veteran Blues defenseman Chris Butler said. “He’s put his head down and continued to work. It’s been fun to watch. I always had an idea that he was a pretty good goaltender. I would never have been able to predict this. I think a lot of people were expecting him to falter.”

Not Binnington, even when he was fourth string in the St. Louis organization as recently as training camp.

Butler always sensed confidence oozing from Binnington, who famously asked early in his run, “Do I look nervous?”

He never really did.

“He’s always been extremely confident in himself, and that’s what you’ve got to love about a goaltender,” Butler said. “You feel like the team kind of takes on that persona when he steps into the crease.”

Binnington’s quiet confidence and ability to steal games were key to the Blues climbing from last place to the top of the hockey world. Game 7 was a perfect example: He made 12 saves in the first period to keep the Bruins off the board and allow his teammates to finally crack dominant playoff goalie Tuukka Rask.

“He shut the door,” center Tyler Bozak said. “He made incredible saves and gave us that confidence that he was dialed in, like he was all year. Just to get that first goal was kind of a relief, and we built from there.”

Binnington was nothing if not resilient. He went 13-2 following a loss this season.

“Stuff’s going to happen,” Binnington said. “You’re going to go through adversity, right? And that’s how you handle it.”

Binnington is grateful for the free grub but all spring has been reluctant to dwell on his rags-to-riches story. Don’t expect any grand proclamations now about his road, his run and how he made this improbable championship happen.

“It’s been good,” Binnington said. “I’ve been enjoying it.”