Tonight: Warriors try to even NBA Finals with Raptors 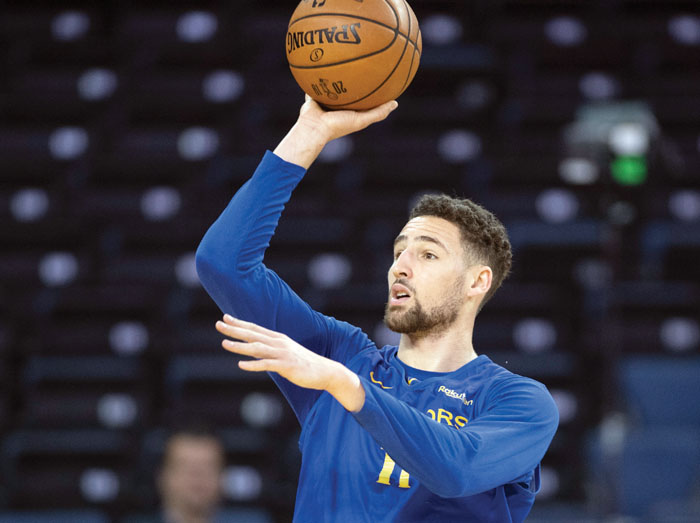 Golden State Warriors' Klay Thompson shoots at practice for the NBA Finals in Oakland on Wednesday, June 12, 2019. The Warriors are scheduled to play the Toronto Raptors in Game 6 of basketball's NBA Finals on Thursday. (Frank Gunn/The Canadian Press via AP)

OAKLAND, Calif. (AP) — Stephen Curry offered a long list of things motivating the Golden State Warriors to extend their season once more and keep alive the chase for a third straight championship.

Winning for injured teammate Kevin Durant certainly ranks No. 1 heading into Game 6 of the NBA Finals.

A victory in the last game at Oracle Arena is right up there, too.

“I don’t think much needs to be said about the motivation that we have or are going to have tomorrow,” Curry said Wednesday. “… To protect our home court, feed off our crowd’s energy, play for ‘K’ and try to keep our season alive. There are a lot of things that you can kind of tap into for energy tomorrow. We’ll be ready.”

Kawhi Leonard, Kyle Lowry and the Raptors are playing for Canada’s first NBA crown, not to mention the country’s first major title since the Toronto Blue Jays won the World Series in 1993.

Toronto lead the series 3-2 series and are 3-0 on the Warriors’ home floor this season.

“For some reason I think both teams are really good road teams and have been all season,” Raptors coach Nick Nurse said. “That’s one thing. Two, two really tough-minded teams playing and you’ve got to be a little more tough-minded on the road. And I think a lot of those games probably could have went either way.”

The Warriors might have to overcome being both emotionally and physically spent after watching two-time reigning Finals MVP Durant go down again. Durant had returned from a monthlong absence with a strained right calf to start Game 5 only to rupture his right Achilles tendon in the second quarter. Durant announced Wednesday on Instagram the severity of his injury and that he had undergone surgery .

The Warriors also lost reserve big man Kevon Looney as he re-aggravated a cartilage fracture in his right collarbone area.

Klay Thompson expects more energy than ever given the Warriors have recently gone through, not to mention all of the highs and lows during 47 seasons at Oracle.

“We’re just thinking about enjoying this last show at Oracle we’re about to give our fans. And I expect our fans to be the loudest they have ever been, especially in the name of Kevin and bringing his type of spirit he would bring to the fight and the competitiveness,” Thompson said. “I know our fans will do that because we deserve it, but more importantly Kevin does for what he gave this team, this organization. There wouldn’t be banners if it wasn’t for his presence.”

Splash Brothers Curry and Thompson will be looking to repeat their hot shooting from Game 5, when they combined to go 19 for 44 from the field and 12 of 27 from deep.

“We don’t want to give up that many to those guys,” Nurse said. “I think you got to guard them, got to find them in transition. They get a good chunk of them in that.”

Some well-intentioned Raptors fans, meanwhile, started a campaign to support Durant’s foundation as a way to offer their care and concern after some fans at Game 5 cheered the injury. “Sorry KD. That’s not what Canada is about. We want to make it up to you!” the post read.

Draymond Green has six technicals during this postseason, and one more draws an automatic suspension. Green needs to control is emotions in Game 6 because should the Warriors win he would not want to sit out Game 7 in Toronto on Sunday.

Green had 10 points, 10 rebounds and eight assists in Game 5.

Leonard goes into Game 6 with 710 points this postseason, 14 shy of passing Allen Iverson (723) for fourth place on the NBA’s single-postseason scoring list and 16 from moving past Hakeem Olajuwon (725) for third. LeBron James is second with 748 last year behind Michael Jordan’s 759 points in 1992.

“He’s a gamer. He’s shown that. He’s a Finals MVP back in the San Antonio Spurs days for a reason,” Curry said of Leonard. “He just makes winning plays. He’s obviously expanded his game since then and shown offensively how dynamic he is. He requires attention at all times.”

Game 6 will be the final hurrah for Oracle. Golden State’s players have said all season the want to leave a legacy on this special home court — and winning a Game 6 would be the ideal outcome for Warriors fans. The Warriors already watched LeBron James and the Cavaliers clinch a Game 7 finals win in Oakland three years ago — it’s not something the home team wants to repeat.

“This has been just an incredible environment in which to coach and play back in the day,” Warriors coach Steve Kerr said. “Even when the Warriors weren’t any good, to come in here as a visitor and feel the energy in this building, you could tell that the fans loved the game. This was a basketball hotbed. And just the atmosphere out there, the energy, the noise, over the last five years with our team’s rise, combined with that organic energy that this place has always had, it’s just been an incredible experience to coach here.”