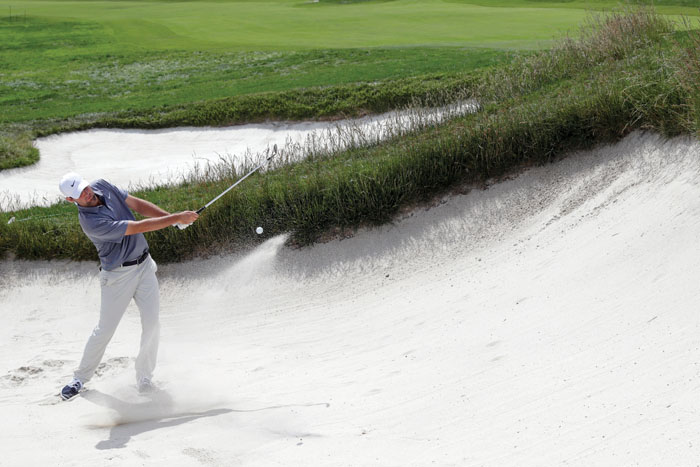 Brooks Koepka hits out of the bunker on the first hole during a practice round for the U.S. Open Championship golf tournament Tuesday, June 11, 2019, in Pebble Beach, Calif. (AP Photo/Matt York)

PEBBLE BEACH, Calif. (AP) — It’s hard to blame Brooks Koepka for not knowing much about the man whose record he’s chasing. For decades, pretty much everyone forgot about him.

His name is Willie Anderson. And though Anderson will never be confused with Jack Nicklaus or Tiger Woods, his accomplishment back in 1905 — winning his third consecutive U.S. Open — is something nobody has been able to match.

“We were in Scotland, and we saw his name on a building where he used to live, or something like that, which is pretty cool,” said Koepka, who will try to match Anderson’s three-peat this week at Pebble Beach. “But I don’t know too much about him.”

Not until the Club at Lac La Belle , known decades ago as Oconomowoc Golf Club, changed hands four years ago did some of the history start coming into view again. Another set of investors bought the club last year, and they are in the process of a full remodel of the course. The clubhouse will feature memorabilia from early in the 20th century, and will pay homage to Anderson and many other young Scots who came to the United States, hoping to teach Americans how to play golf.

Many of those Scots played big-money tournaments at Oconomowoc back in the day.

“The previous owner spoke with guys in their late 80s and 90s, and they remembered hearing the name, but over time, it sort of got washed away,” said the new owner, Matt Morse. “You think about what these guys did as 16-, 17-, 18-, 19-, 20-year olds, jumping on a ship and landing in New York and teaching golf, that was their calling in life. Pretty amazing.”

According to information from the USGA archives, Anderson was born in Scotland but moved to the United States in 1894, when he was 15. He and the champion of the inaugural U.S. Open (1895), Horace Rawlins, traveled to California to play tournaments and exhibitions against each other. Anderson won his share of the one-on-one matches, though Rawlins wasn’t fully convinced of his opponent’s talent until he challenged Anderson to hit a ball off a beer bottle without knocking over the bottle.

Anderson did it multiple times and Rawlins said, “Now, I see by this I have been mistaken. This man is a grand golfer.”

Anderson’s first of four titles came in 1901. Back then, professionals were viewed as second-class citizens at the country clubs. At the U.S. Open at the Myopia Hunt Club in Massachusetts, Anderson and the pros were told to eat their lunch back in the kitchen instead of in the dining room where the amateurs ate. Anderson objected, took a big divot out of the lawn while swinging his club in protest, and the club representatives compromised and let the pros eat in a tent.

Two years later, Anderson started his string of three straight at Baltusrol, then returned to Myopia Hunt in 1905 for his third in a row and fourth overall title.

According to an Associated Press dispatch after his two-shot victory over Alfred Smith, “The custody of the championship cup for another year, $200 and a gold medal are the material trophies of Anderson’s victory.”

Anderson kept playing, teaching and building clubs, but lived a vagabond’s life, working at no fewer than 10 courses around the country over the span of a decade. He finished 11th at the 1910 U.S. Open but died only months later at age 31. Cause of death is unknown — some believe it was hardening of the arteries as a result of too much alcohol, while others say it was epilepsy.

Time passed. The few scraps of memorabilia and newspaper clippings faded away, as did most memories of America’s first and only man to win three straight U.S. Opens.

“I did look him up,” Strange said. “It took a little while because that was back before Mr. Google. … In 1989, after my second U.S. Open, how was I going to find out about Willie Anderson unless you went to Far Hills, New Jersey,” the home of the USGA and its archives?

Hard to blame Strange — or Koepka. Because of the era in which he lived and the fact he never really settled down, there simply isn’t that much to read about on Anderson.

“We’re hoping to be able to preserve history and kind of honor the past, in a way,” Morse said. “Hopefully, someone will still be talking about Willie (one hundred) years from now. That’s the goal.”