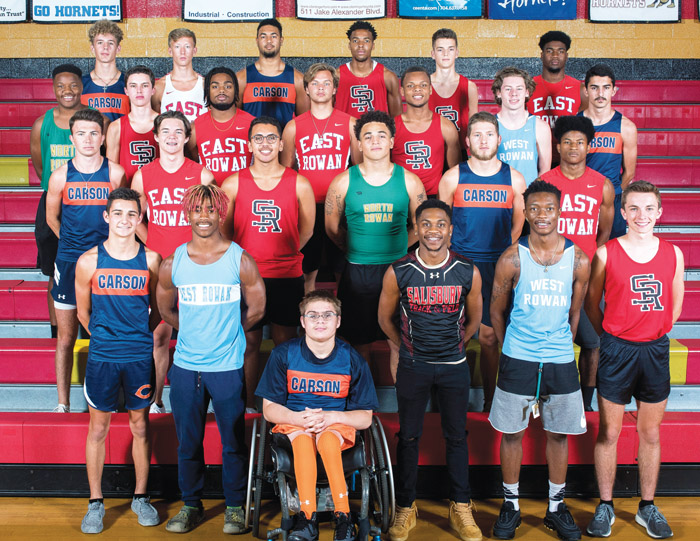 Second in a series on the seven All-Rowan County teams for the spring.

SALISBURY — Speedster Tyrone Johnson didn’t write the book on sprinting, but his name shows up on a lot of pages.

So it comes as a bit of a surprise to hear the recent Salisbury graduate indicate he’ll try to walk on as a long jumper for St. Augustine’s in the coming months.

“Nobody really likes running,” said Johnson, the Rowan County Track & Field Athlete of the Year. “But it’s something I’ve gotten good at. Once you get good at something, you want to do it better and see how far you can take it.”

Johnson took running and long jumping pretty far this spring. He prevailed in both events in the April 17 county meet at East Rowan, winning the 200 meters in 22.25 seconds and the long jump with a rather ordinary leap of 21 feet, 2 inches. He also placed second in the 100 (11.19) and the triple jump (43-10), accumulating 36 team points for the Hornets.

“I was undefeated in the long jump and 200 all the way until the regionals,” Johnson said with that coltish smile of his. “No one could beat me. When you have speed, you have choices.”

He went on to qualify for the state meet at North Carolina A&T, where he placed third in the long jump (21-9) and drew interest from college recruiters. He chose St. Aug’s in Raleigh, a powerhouse Division II program that finished third in last month’s national championship meet in Texas.

“It’s a good environment with a great coaching staff,” said Johnson. “It’s in a city and I’ll be around a lot of people who support me and want me to succeed. But at this point, I’m just trying to walk on. Nothing is for sure.”

As a prep performer, Johnson was always in motion. He was an all-county and all-conference selection and named MVP of the Central Carolina Conference championship meet. Johnson also played wide receiver for Salisbury’s 2A state playoff football team last fall.

“Tyrone is just a special track athlete,” said SHS assistant coach Bryan Withers. “He may be a bit undersized for a lot of the events he participated in. He’s not your proto-type long jumper, triple jumper, 200 guy. But he makes up for that with natural talent and hard work.”

At 5-foot-5 and 140 pounds, Johnson is small enough to jockey a quarter horse — and fast enough to challenge one. He realizes that if you’re any good at all, you can always be better.

“I was always fast,” he said. “My older brothers ran track, so I’d go to their meets and race them, just for fun. As I got older, I got better. I became third in the state.”

His future, Johnson insists, begins not at the starting line of a heated sprint, but in the long jump blocks.

“I’m trying to push myself, to see how far I can go,” he said. “I enjoy a challenge. If there’s not a challenge, I want to be pushed so I can get better.”

He’ll get that challenge if he makes the St. Aug’s team.

“He’s already overcome a lot of obstacles,” said Withers. “All the people who look at him and doubt him, that doesn’t matter to him. He’s got strong legs, works hard and the speed really helps. When he’s on the board, he just flies. Your mouth just drops. He’s a pleasure to watch.”

Johnson hopes he can continue to impress his circle of family, friends and long jump enthusiasts.

“Everybody I surround myself with wants me to do better,” he pointed out. “They want me to make good choices, get out of Salisbury and make something of myself.”

He’s off to a good start, but for him it’s always about the finish.