Several Salisbury roads to be closed for ‘The 24th’ filming 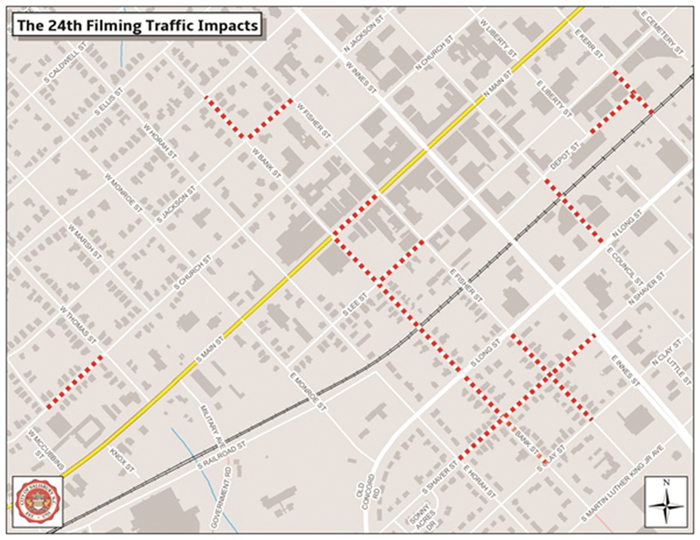 SALISBURY — The filming of “The 24th” is expected to bring multiple road closures next week and continuing until June 28.

“The 24th” is a film about riots in Houston on Aug. 27, 1917, known as the Camp Logan Riots. The riots involved 156 soldiers of the Army’s African-American 3rd battalion, and they left four soldiers and 14 civilians dead.

Kevin Willmott, who is known for his work with director Spike Lee in films such as “BlacksKkKlansman,” wrote “The 24th.”

The filmmakers are still looking for extras for roles of black and white man ages 18-70, with a waist size of 34 to 42 inches for costumes.

Road closures will begin June 17. They are not expected to be all-day and are subject to change. Some areas that will be affected are:

• June 21: Intermittent traffic control on East Council Street from Depot to North Long streets from 9 a.m. to 5 p.m., and no street parking on Depot Street from East Liberty to East Kerr streets.

• June 26: Closures of South Shaver Street from East Bank Street to East Innes streets and East Fisher from South Long to South Clay streets from 5 to 11 p.m. Closure at East Council Street from Depot to North Long street from 11 p.m. to 5 a.m.

• June 27: Closure of Bank Street from Main to South Long streets and South Lee Street from East Horah to East Fisher streets from 5 p.m. to 5 a.m.

The parking lot at the future Bell Tower Green park will be closed for film crews to use.

For updates, visit salisburync.gov/film. Street closings will be available through the city’s Nixle alert service.