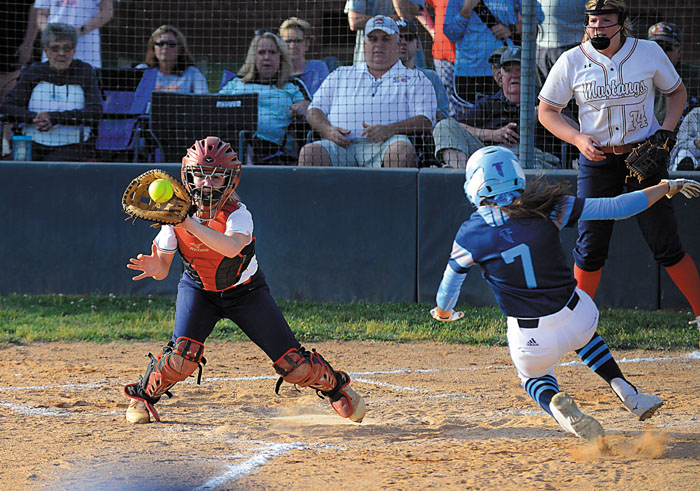 Wayne Hinshaw File photo/for the Salisbury Post ... East Rowan catcher Mackenzie Sprinkle, left, awaits the throw, as West Rowan’s Mary Sobataka (7) slides into home plate, during a game on May 3. Sprinkle recently announced that she will continue her education and softball career at Belmont Abbey.

GRANITE QUARRY — The North Piedmont Conference Tournament championship game at West Rowan shed some light on what East Rowan graduate Mackenzie Sprinkle can do, with and without a bat in her hands.

West Rowan freshman Kenadi Sproul stole 31 bases this season and was the county’s quickest baserunner, but when Sproul took off for second base in the second inning, Sprinkle made a perfect throw to second baseman Mac Misenheimer, and Sproul was out.

At the plate, in the fifth inning, Sprinkle doubled to the wall to drive home teammate Maddie Trexler. That also was a significant moment, as it was the only run East scored in four games against the county’s toughest pitcher, Whitley Arnott.

“When we beat Carson in the tournament semifinals, it was a good win for us,” Sprinkle said. “But that West game for the championship is the one I’ll look back on and remember. We lost, but that was the best game we played as a team.”

Sprinkle, who has signed with Belmont Abbey College,  excelled offensively and defensively this season. The offensive numbers were quantifiable — .481 with 37 hits, 23 runs and 22 RBIs. She had only one homer, but she belted 12 doubles. Defensive value isn’t easily measured, but her work behind the plate was a big reason the Mustangs (13-10) had a winning season.

NPC’s coaches were so impressed they voted Sprinkle the league’s player of the year, even with rising junior phenoms Taylor Walton (West) and Kary Hales (Carson) putting up huge power numbers.

“Mackenzie is a very good hitter, but her defense was even more important to us,” East coach Mike Waddell said. ” She called every pitch, did a great job calling the pitches, and that’s a really big deal. That’s a huge burden off the coaching staff.”

Sprinkle shared East’s team MVP award with Trexler, who had an even better offensive season.

East employed three different pitchers. For all of them, Sprinkle did the big things, like throwing out baserunners, as well as the little things, such as framing borderline strikes and blocking balls in the dirt.

Sprinkle is only 5-foot-2 and slim and doesn’t look like the prototype catcher,  but she’s been behind the plate a long time.  Most of her passion for softball comes from her joy of catching.

“A friend got me to try catching when I was 6 years old, and I loved it,” Sprinkle said. “I’ve always wanted to catch since then. Travel ball, Legion ball, high school ball, I’ve been a catcher. I learned how to work with pitchers and call pitches very early in my career.”

She was verbally committed to Catawba at one point. She de-committed from the Indians back in September.

Belmont Abbey’s new coaching staff saw her perform in travel ball and invited her to a prospect camp.

“They offered a pretty good deal after that camp, and I really liked the coaching staff and the school,” Sprinkle said. “I’m not even there yet, but they already treat me like family.”

The standout for Belmont Abbey’s 2019 team that went 21-22 was catcher Claire Doyle, who made all-conference and was named Conference Carolinas Scholar-Athlete of the Year for softball.

Doyle is a rising senior.

In Sprinkle, Belmont Abbey may have found the player who will follow her behind the plate.