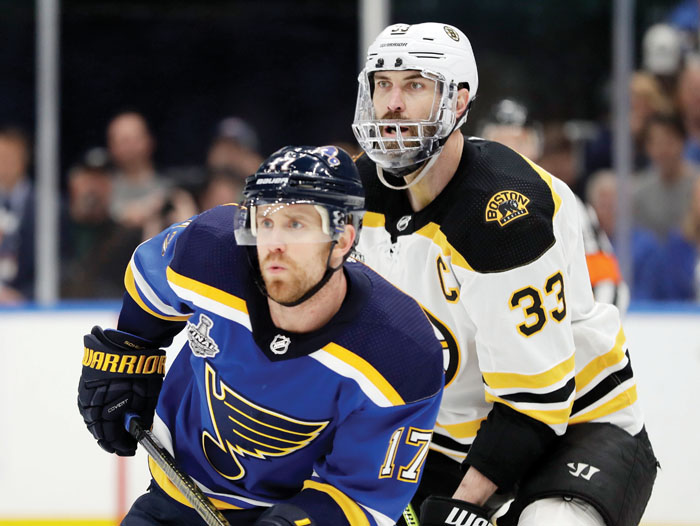 BOSTON (AP) — Zdeno Chara didn’t say much to his teammates when he showed up, as usual, one game after a puck bloodied his face and knocked him out of the Stanley Cup Final.

And it wasn’t just because it was difficult for him to talk.

“He doesn’t need to say anything, really,” forward Charlie Coyle said on Tuesday, a day before Game 7 of the NHL championship. “It’s already known.”

Nine days after Chara left Game 5 with blood dripping from his face, and three days after Boston won in St. Louis to force the series to the limit, the Bruins and Blues will bring the confetti down on another hockey season Wednesday night. Chara will be there for the 14th Game 7 of his career — an NHL record.

“It’s always fun to play Game 7s,” said Chara, who as captain would have the honor of being the first to skate with the Stanley Cup. “Very intense. You’ve just got to realize you’ve got to lay everything on line and play your best game.”

A six-time All-Star and the winner of the 2009 Norris Trophy as the league’s best defenseman, the 42-year-old Chara was still among the team’s leaders in ice time this season, his 21st in the league. So he left a huge, 6-foot-9 hole in the team’s lineup when he left Game 4 with blood dripping from his mouth after Brayden Schenn’s shot deflected off Chara’s stick and into his jaw.

Chara returned to the bench, but did not play; coach Bruce Cassidy said he wanted to be there with his teammates. Chara was back for Game 5 in Boston, but alternate captain Patrice Bergeron did most of the talking to fire up the team before the game.

“We shared our responsibility,” Chara said after practice on Tuesday. “It’s a great group of leaders we have, and it’s not that I’m going to be sitting at a desk and trying to figure out some speech. We all realize that it’s more about our actions than words.”

And Chara’s presence said it all. Cassidy said Chara is in a lot of pain, and he also has to adjust to playing with the full-face shield that limits his vision. (Although there have been reports that Chara broke his jaw, Cassidy has described it only as a “facial injury.”)

The Boston fans gave the captain a lengthy ovation that he said caught him by surprise.

“I was overwhelmed by the response of the crowd,” he said on Tuesday in his most extensive comments since the injury. “It’s very humbling, and I’m so honored to get that kind of a pregame crowd being involved and cheering us on.”

BOSTON (AP) — If the St. Louis Blues beat the Boston Bruins in Game 7, perhaps Steve Hatze Petros should get his name on the Stanley Cup.

He is the NHL schedule-maker , making him the most responsible for a January-March stretch when the Blues didn’t play more than one consecutive home game at a time. It was a virtual 70-day road trip that forced a team with a half-dozen new faces to come together under coach Craig Berube. It also helped them put up a 9-3 road record in the playoffs and it is a big reason the Blues say they feel totally at home playing for the Cup in Boston on Wednesday night.

“It was a time for us to get to know each other better,” center Ryan O’Reilly said. “We got out and got away, got the chance to go to the rink together every day, eat together every day. It just kind of brought us together. I think that’s where we found our identity and came together. As you can see throughout the course of the playoffs, we’re confident in the room. We find it easier to get to our game and have success.”

Whichever team gets to its style of game faster and more effectively wins. That has been the story of this hard-fought series between evenly matched teams that like to play different ways.

Boston wants to skate and use its talent to score goals and grab momentum. St. Louis prefers to get pucks deep in the attacking zone, make defenders turn around and then deliver body blows whenever possible.

The Blues front office has tried to replicate life on the road by having players stay in a hotel at home, but they are just 6-7 in St. Louis in the playoffs.

“I think when you’re at home, you’re maybe trying to play a little differently at times,” Berube said.

The opening minutes of a 5-1 loss in Game 6 exemplified that. Players abandoned their straightforward approach and got fancy by trying to razzle-dazzle the puck past the Bruins, and when a goal didn’t materialize in the first 10 minutes, momentum went the other way.

“We came out pretty well,” Boston defenseman Brandon Carlo said. “We’ve had good starts on the forecheck early, playing assertive, being aggressive and staying right on top of them, not backing down from anything, keeping our gaps tight, forwards are doing a great job on the forecheck and kind of asserting the pace out there.”

Who sets the pace could win Game 7. If it is fast and up and down the ice, advantage Bruins.

“I think we’re a better skating team, and if we’re playing to our pace both skating and moving the puck, I think we’ve taken over a little bit and created more chances, playing better defensively,” Bruins forward Joakim Nordstrom said. “When we’re skating, we’re getting back on pucks better. It obviously helps our D to break the puck out. Same thing goes up ice. We get on the forecheck a little bit quicker.”

The Blues’ whole game is based on their forecheck — how they put pressure on opposing defensemen and wear them down over the course of a game and a series.

“We’re definitely built to sustain pressure,” Blues winger David Perron said. “When we do that, we can really back off teams and hopefully slow down the crowd a little bit.”

Quieting what should be a raucous crowd on hand for the first Stanley Cup Final Game 7 in Boston is easier said than done. St. Louis did that in Game 2 to tie the series and is brimming with confidence, unfazed by the lack of home-ice advantage in the final game of the season.

“We’re excited and we’re happy to get back on the road,” winger Patrick Maroon said. “I think this where we jell the best.”

The Bruins have won seven of 12 home games in the playoffs. Coach Bruce Cassidy said playing for home-ice advantage all season is for a situation just like this, but the road warrior Blues don’t seem concerned.

“We just seem to like it,” defenseman Carl Gunnarsson said. “We just keep putting up good results on the road. I don’t know why, but it seems to be working for us. We’ll try to keep that going.”