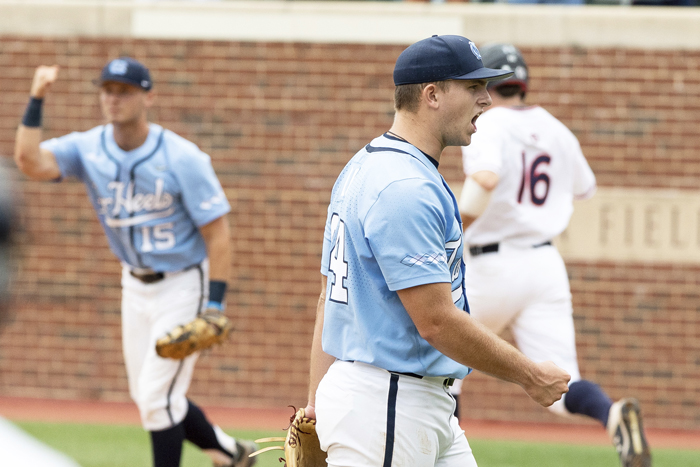 CHAPEL HILL (AP) — One day after North Carolina’s bullpen imploded, Austin Bergner and West Rowan alum Austin Love combined for a clutch pitching performance in a six-hit, 2-0 shutout of Auburn on Sunday as the Tar Heels forced a deciding Game 3 in the Chapel Hill Super Regional.
Love, who had surrendered two hits and two runs in one inning in Game 1, tied his season high with six strikeouts in 4 innings of relief in Game 2 to improve his record to 8-4. North Carolina had given up nine runs in the final two innings as Auburn rallied to win Game 1 11-7.
“Yesterday I was falling behind in the count a lot,” Love said. “Today I was trying to make sure every first pitch was a strike.”
North Carolina (46-18) got off to a good start in the first inning against Auburn starter Bailey Horn (4-1) as Ike Freeman delivered a two-run single with one out. But the Tigers (37-26) made timely pitches the rest of the way to stay within striking distance as the Tar Heels tied a season high with 14 runners left on base. Game 3 is Monday.
Bergner, who gave up four hits in 4 innings, worked out of a jam in the first inning by striking out Rankin Woley with the bases loaded. Auburn also had a chance to score after chasing Bergner with consecutive hits in the fifth.
Love replaced Bergner and got Will Holland to fly out to right field before Edouard Julien hit a blast to center field that was tracked down by Dylan Harris and caught just short of the wall.
“I don’t think Julien could have hit the ball any harder to the deepest part of this ballpark,” said Auburn coach Butch Thompson. “I thought both teams competed like crazy today. I thought it was an unbelievable game.”
Love said his teammates stayed positive with the pitchers after the bullpen’s struggles in Game 1. Love rewarded them by throwing 41 strikes in 50 pitches.
“We were fortunate to get a couple runs early, and then our pitching was just sensational,” North Carolina coach Mike Fox said. “And (Love) out of the bullpen was just a phenomenal performance. We played good defense behind them and got us a win.”