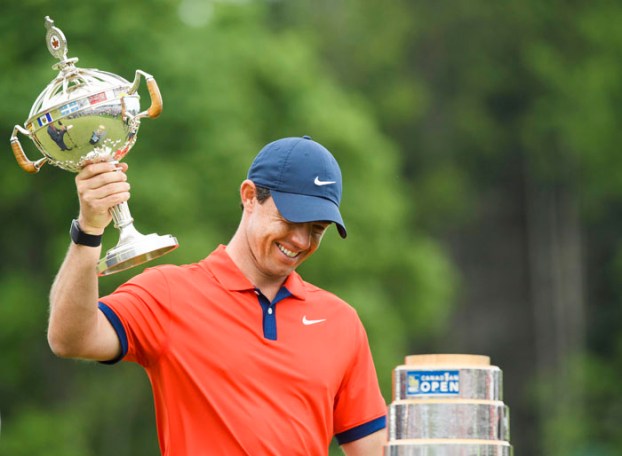 ANCASTER, Ontario (AP) — Call it the zone, call it the flow. Rory McIlroy is familiar with the feeling that golf is easy, that he can swing freely and nothing bad will happen.
He first felt it at age 16 when he shot 61 at Royal Portrush in his native Northern Ireland, which will host this year’s British Open. He experienced it during runaway victories at the U.S. Open and the PGA Championship. And he savored it again on Sunday en route to another 61, this one giving him a seven-shot victory in the Canadian Open.
“I think when you play, you get into stretches like this, you do get into some sort of flow, that flow state or in the zone or whatever anyone wants to call it. I definitely got into that a little bit today at the start of the back nine. It was the same that day at Portrush all those years ago,” McIlroy said. “It’s almost like you’re out of your own body and looking at yourself play. For some times today that’s how it felt. So if I could bottle that feeling and take it with me week to week, I would. Sort of comes and goes.”
McIlroy added the Canadian Open to his schedule for the first time largely because it was moved to the week before the U.S. Open. He turned the major-championship tuneup into a career highlight, becoming the sixth player to win national championships in the U.S., Britain and Canada. Lee Trevino (1971) and Tiger Woods (2000) are the only players to win all three in the same season, something McIlroy could do this year with victories next week at Pebble Beach and at Royal Portrush in July.
It was McIlroy’s fifth win in a national open, following the U.S. Open (2011), Australian Open (2013), British Open (2014) and Irish Open (2016). McIlroy also counts the Hong Kong Open (2011) as part of his national-championship tally.
“Some of the greats of the game have won this trophy. For me to put my name on it is something I’m very proud of,” McIlroy said. “Part of the reason for playing here was I wanted my game to be in good shape for Pebble Beach, but (it) doesn’t mean this tournament doesn’t mean anything.”
Starting the day in a three-way tie for the lead, McIlroy ended any suspense about who would emerge as the champion with five birdies in his first seven holes, none from longer than 8 feet.
The only question on the back nine was whether McIlroy would shoot the 11th sub-60 round in PGA Tour history. He made four straight birdies from Nos. 11-14, and a bogey on the par-3 16th stalled him only momentarily. He followed with a 7-iron from 196 yards to 2½ feet for eagle on the par-5 17th to get to 10 under at par-70 Hamilton Golf and Country Club.
But he missed the green on the par-4 18th and his bunker shot went long. He ended up tapping in for bogey to finish at a tournament-record 22-under 258. The 61 equaled the low round of McIlroy’s PGA Tour career.
McIlroy was five shots off the lead entering the weekend and shot 64 on Saturday before finding another gear on Sunday.
“I think what I’m proudest of is still playing with that freedom today going out being tied for the lead. Just putting my foot down and really making this tournament mine,” McIlroy said. “I think by the time I got to the 14th tee I wasn’t really thinking of winning the tournament. I was thinking of trying to shoot 59. I had to reassess my goals a little bit in the middle of that back nine.”
He settled for his 16th PGA Tour victory and 25th win worldwide, and the fourth by at least seven shots.
Shane Lowry and Webb Simpson tied for second at 15 under.
Adam Hadwin, seeking to become the first Canadian winner of the event since 1954, closed with a 70 and finished sixth, 10 shots back. His consolation prize was a spot in the British Open.
Graeme McDowell also earned his place in the British Open. The Portrush native guaranteed a tee time in his hometown by holing a hard-breaking 29-footer for par on the par-4 18th to shoot 68 and finish in a tie for eighth.
“It had 12 feet of break on it. It was ridiculously tough putt to make,” McDowell said. “Just fancied it, I saw it, liked the way it looked, and when I saw it go in it was a huge relief.”
This year’s Open will be the first in Northern Ireland since its only previous visit to Royal Portrush in 1951.
A third spot was available at the British Open for a player not already eligible who finished inside the top 10, but the other top-10 finishers were exempt from qualifying.
“It’s like chasing a ghost out there when you’re trying to play for these spots because you don’t know whether fifth is going to be enough and you’re thinking 10th might be enough,” McDowell said. “You’re out there playing for a lot of FedEx Cup points and a lot of cash, and all I can focus on is trying to get exempt for the Open Championship. I might go to Portrush and miss the cut and think, ‘What was that all about?'”
___
More AP golf: https://apnews.com/apf-Golf and https://twitter.com/AP_Sports

ST. LOUIS (AP) — Punch, counterpunch, Game 7. Just when it looked like the Boston Bruins were down and out,... read more