Duke falls to Vandy as Rocker throws no-hitter, strikes out 19 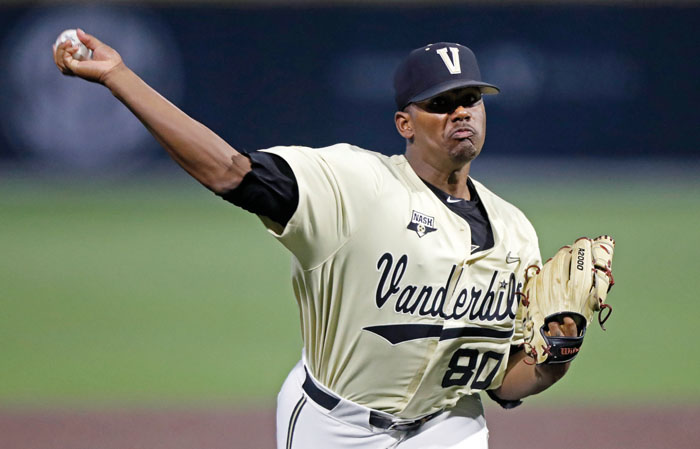 By TERESA M. WALKER AP Sports Writer
NASHVILLE, Tenn. (AP) — Freshman Kumar Rocker pitched the eighth no-hitter in NCAA Tournament history striking out a career-high 19 as Vanderbilt beat Duke 3-0 Saturday night to force the Nashville Super Regional to a deciding third game.
Rocker tied his previous career best through five innings with 10 strikeouts, and his slider worked so well he retired 13 of 15 Duke batters. He struck out four in the fifth with one striking out only to reach first on a wild pitch. Rocker (10-5) had not thrown more than 105 pitches in a game, but he came out for the bottom of the ninth and struck out the side swinging.
He walked only two on 131 pitches with 89 of those strikes.
It was the first no-hitter in the NCAA tournament since Florida’s Jonathon Crawford shut out Bethune-Cookeman on June 1, 2012.
Now Vanderbilt (53-11) will play Duke on Sunday trying to reach its fourth College World Series and first since 2015, while the Blue Devils (35-26) haven’t been since 1961.
Rocker hit the second batter he faced with a pitch near the left eye of centerfielder Kennie Taylor. He went down in pain with the sellout crowd silent while trainers treated him. Fans gave him a standing ovation when Taylor sat up, then stayed silent until he stood up and walked off the field.
Taylor was back in the dugout icing the left side of his face by the eighth inning. TV announcers said he had gotten X-rays and a CT scan at the hospital.
Damon Lux replaced him as a runner, and Rocker struck out Matt Mervis with Philip Clarke throwing out Lux at second.
Bryce Jarvis, MVP of the Morgantown Regional after striking out 11 for Duke, grew up a Vanderbilt fan in Franklin south of Nashville. Jarvis got the first two outs of the fifth, then Ethan Paul singled. Paul stole second, then advanced to third on a wild pitch by Jarvis. He scored when Philip Clarke poked a single into right field for the first run of the game.
Pat DeMarco thought he had a 2-run home run to follow only to be robbed by Lux with a great catch at the wall .
Rocker struck out side in fifth inning to tie his career-high with 10 strikeouts, though Ethan Murray reached base on a pitch Clarke couldn’t handle. That also set a Vanderbilt record for most strikeouts in a super-regional game, topping Carson Fulmer’s nine against Stanford in 2014.
Vanderbilt added two in the eighth on a sacrifice fly by Stephen Scott and a squeeze bunt by Julian Infante.
Jarvis (5-2) struck out nine through seven innings taking the loss.
___
More AP sports: https://apnews.com/tag/apf-sports and https://twitter.com/AP_Sports