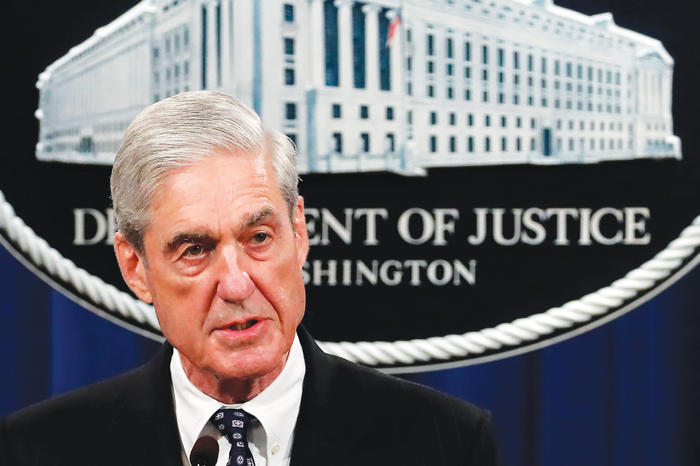 Robert Mueller speaks at the Department of Justice on May 29. Carolyn Kaster/Associated Press

It’s a familiar quote from Charles Dickens’ classic “Oliver Twist,” but with special contemporary relevance in light of a statement last week by former special counsel Robert Mueller: “If the law supposes that,” said Mr. Bumble, ‘the law is a ass — a idiot.”

But it isn’t so much that the law is fractured, rather it is practitioners who sometimes do it an injustice.

In a statement at the Justice Department during which he resigned and announced the closing of his office, Mueller said this about indicted Russian hackers who attempted to influence the outcome of the 2016 election: “These indictments contain allegations and we are not commenting on the guilt or the innocence of any specific defendant. Every defendant is presumed innocent unless and until proven guilty.”

Moments later, Mueller said about President Trump and allegations (mostly by Democrats and the media) that he obstructed justice: “… If we had had confidence that the president clearly did not commit a crime, we would have said so. We did not, however, make a determination as to whether the president did commit a crime.”

So it’s innocent until proven guilty for the Russians, who are never going to be tried in the United States, and an insinuation of guilt until he proves himself innocent for the president of the United States? This is standing justice on its head.

In an interview with CBS News, Attorney General William Barr said he believes Mueller could have come to a conclusion as to whether the president obstructed justice. When he didn’t, Barr said he concluded he did not, based on the evidence.

That Mueller had nothing to say about what Trump dismisses as the “phony” Steele dossier, which led to a FISA warrant allowing the FBI to spy (Barr’s word) on the Trump campaign, or the role of Hillary Clinton and Democratic Party in paying for the dossier, further corrupts the law and establishes a double standard as the only standard by which some politicians and members of the establishment live.

It should also be remembered that, though Mueller himself is a registered Republican, most of the attorneys on his team were registered Democrats. A handful donated money to Clinton’s 2016 campaign. Just how much confidence should be placed in a report put together by such people can be answered by asking about the confidence one might place in a report about a Democratic president and a team of Republican lawyers.

Thankfully, the Justice Department’s inspector general, Michael Horowitz, may offer more information as soon as this week, which could incriminate the Clinton campaign and the Democratic Party for alleged corrupt activities in the last election. Additional information is likely to be forthcoming from U.S. Attorney John Durham, named by Barr to investigate the origins of surveillance of the Trump campaign.

This is likely what the left and the media fear most. While they are unable to counter the good economic news, their only hope to keep Trump from being re-elected is to remove him from office on charges of obstruction and corruption or drive down his approval numbers in hopes of defeating him. Some polls show that strategy isn’t working.

In his farewell remarks, Mueller said his more than 400-page report is the last word. Some in Congress from both parties want him to testify. Mueller said he has nothing to add to the report, but there is more to say and Mueller should be required to say it.

House Democrats may not want to have Mueller appear because Republicans will ask tough questions. Could this be why they are desperately trying to change the subject by seeking Trump’s tax returns and bank records dating back to before he became president?

At some point, many voters are going to look at this as persecution of the president, which can only add to his prospects in 2020.