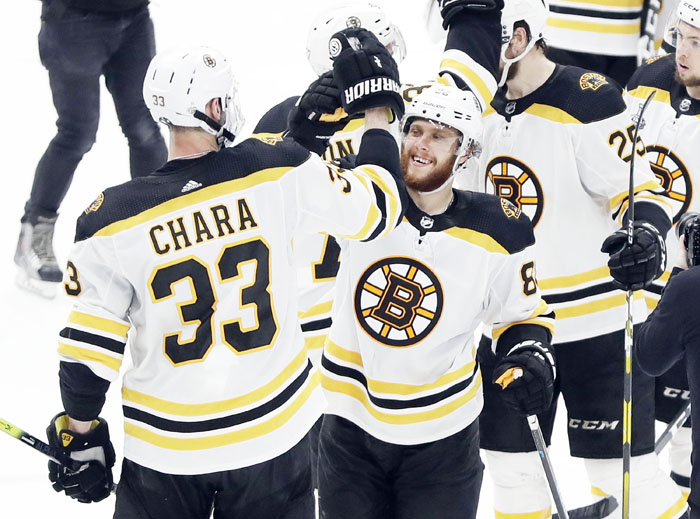 Boston Bruins defenseman Zdeno Chara (33), of Slovakia, celebrates with right wing David Pastrnak (88), of the Czech Republic, after the Bruins beat the St. Louis Blues in Game 6 of the NHL hockey Stanley Cup Final Sunday, June 9, 2019, in St. Louis. Both players scored goals as the Bruins won 5-1 to even the series 3-3. (AP Photo/Jeff Roberson)

ST. LOUIS (AP) — Punch, counterpunch, Game 7.
Just when it looked like the Boston Bruins were down and out, they remembered they can throw their weight around, too. Boston showed it can play St. Louis’ physical style of hockey and then some, and the Stanley Cup Final is tied at 3-3 with Boston headed home for Game 7 on Wednesday night.
How these two bruising teams will sort that out is anyone’s guess, but the Bruins seem to be all done being bullied by the Blues.
“We can play a skill game and a physical game,” goal-scorer Brad Marchand said. “It’s a big part of our game and allows us to get some momentum, create some opportunities, so we try to feed off that.”
In the wild pendulum swing this series has become, the Blues entered Game 6 with all the momentum. They had worn down the Bruins, solved their penalty-killing woes and shut down Boston’s talent.
This time, it was the Bruins who wore down the Blues to the point coach Bruce Cassidy wondered if St. Louis players were fatigued. Inspired by Patrice Bergeron to not let this run end, the Bruins were better at keeping pucks alive and forcing mistakes and they didn’t bend to the Blues’ punishing cycle game.
“That’s where I think this series is tilted in their favor — when we’re not strong on the walls in our own end and they keep pucks alive, we get fatigued, we get worked down low and as a result things go their way,” Cassidy said. “We did a better job getting inside of that pinch before it happened. They’re big guys. If you don’t get position, you have no chance on their D to get it out. So that was the other thing we did better on the walls.”
Jazzed up in front of frenzied fans hoping to celebrate the franchise’s first championship, the Blues tried to flash more skill than size and physicality — the bread and butter of their game — and were met by a strong resistance from the big, bad Bruins. Boston benefited from referees Gord Dwyer and Chris Rooney letting both teams play without whistling every possible ticky-tack penalty.
Until things got out of hand late, much of Game 6 was played at 5-on-5, and the Bruins had the advantage. They also had goaltender Tuukka Rask at his best, stopping chance after chance on the way to 28 saves.
“They played tight,” Blues forward Alex Steen said. “We got some zone time, but we’ve got to get more pucks to the net, a little bit more traffic and get one of those really dirty ones. It was a hard-fought game.”
Unlike much of the rest of the series, the Bruins actually were the aggressors and more than comfortable going hit for hit.
“That’s just a part of our game when we play our game the right,” Boston defenseman Charlie McAvoy said. “When we try to impose our culture, part of that is everybody can be physical and play that side of the game. I think that we definitely have better results when we do.”
It helped that the Blues’ discipline issues resurfaced again, and this time the Bruins cashed in and wrested away the momentum going home for Game 7. One key to Boston staving off elimination was getting the power play back on track, which it did with a 5-on-3 goal by Marchand that should give that unit confidence.
“Our power play, when we’re good and when we’re on and we capitalize on our opportunities, it allows us to feel good about our game,” Marchand said.
Cassidy also should be feeling good after his questionable lineup decision turned out perfectly. He put Karlson Kuhlman in for his first action since April 30 because his skill better fit what he wanted than veteran grinder David Backes, and the rookie scored his first goal of the playoffs.
“I just like doing what I do best: getting up and down the ice and playing the 200-foot game,” Kuhlman said.
There will be more tactical adjustments moving forward because Cassidy and Blues coach Craig Berube have been trading moves in this chess match all series. The Blues will get key fourth-liner Ivan Barbashev back from a one-game suspension, and the Bruins might be able to bring back defenseman Matt Grzelcyk and forward Chris Wagner back from injuries.
Even if those players can’t return, this series is so even that it’s fitting it comes down to one more game.
“That’s why we’re going to seven games: You’ve got two good teams who have gone toe to toe here,” Cassidy said. “The whole hockey world loves a Game 7. It should be a great night in Boston and may the best team win.”
___
Follow AP Hockey Writer Stephen Whyno on Twitter at https://twitter.com/SWhyno
___
More AP NHL: https://apnews.com/NHL and https://twitter.com/AP_Sports