With Leonard leading way, Raptors on cusp of 1st title 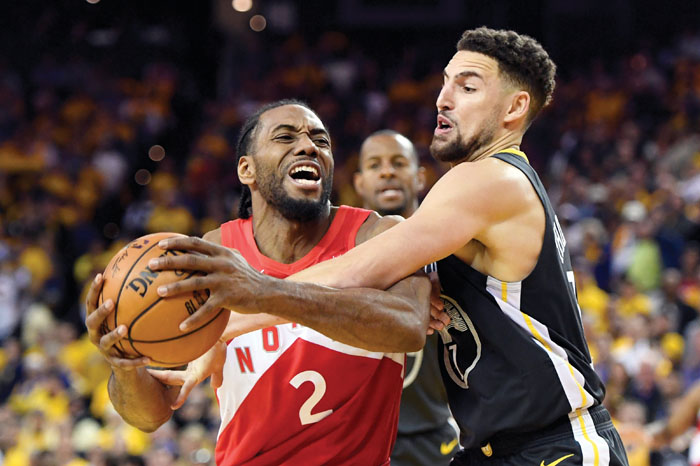 OAKLAND, Calif. (AP) — There was a moment, not long before the postseason started, when Toronto coach Nick Nurse learned all that he really needed to know about Kawhi Leonard and what makes the man of few words tick.

The conversation was about the 82-game regular season.

Leonard shrugged and described those games as “just practice.”

“That’s when I knew,” Nurse said, “that this guy has another gear that he was going to get to.”

Everyone knows that now — or at least, everyone should be reminded of that now. Leonard was the NBA Finals MVP in 2014 and looks very much like the soon-to-be NBA Finals MVP in 2019. He is at the top of his game and has shown that not only is he over the leg ailment that cost him basically all of last season but that he might just be better than ever.

They call Leonard “the King of the North” in Toronto now, and on Monday night that title might expand to cover the entire NBA as well. Leonard is on the cusp of a second championship and possibly ending a second era. The Raptors lead the Golden State Warriors 3-1 in the NBA Finals and Toronto plays host to a potentially championship-clinching Game 5 on Monday night.

“It’s not over yet,” Leonard said.

The way he’s playing, it’s hard to imagine this slipping away.

There’s no shame in that. The Warriors have some defenders of exceptional pedigree. Green is a former defensive player of the year. Klay Thompson was an all-defensive team player this year. Andre Iguodala and Andrew Bogut have earned their way onto that team in previous seasons.

“He’s just been phenomenal,” Nurse said, of Leonard. “The energy that he brought on the defensive end translated to his offensive game. He might not be the best player in the NBA — he’s in the conversation of some sort of top five or top three or whatever you want to have — but he’s the best team player.”

They’re even noticing that outside of basketball.

Golf is about as individual a sport as there is. But the sixth-ranked golfer in the world Justin Thomas marveled after seeing Leonard in person during these playoffs.

“I’m a huge Kawhi fan,” Thomas said. “I think he’s awesome to watch. I love his demeanor, his work ethic, how he goes about his own business and he’s never blaming anybody. He never complains. He kind of just goes out, does his work and is always thanks his teammates. He’s never putting anything on himself. It’s pretty cool.”

Leonard’s moment of entering the realm of NBA superstardom probably came in the 2014 finals when San Antonio faced Miami for the second consecutive year.

Leonard scored nine points in a Game 1 win, nine points again in a Game 2 loss. He was struggling, almost deferring too much to Spurs leaders like Tim Duncan, Tony Parker and Manu Ginobili. That’s when San Antonio coach Gregg Popovich gave Leonard now-infamous advice: “The hell with Tony, the hell with Timmy, the hell with Manu, you play the game. You are the man.”

Leonard’s point totals in finals games since that night: 29, 20, 22, 23, 34, 30, 36. The Spurs won the 2014 title to end LeBron James’ time in Miami and the Heat “Big Three” era. The Raptors are a win away from ending Golden State’s two-year run as NBA champs and potentially ushering in major roster changes for the Warriors this summer as well, with Kevin Durant among the team’s free agents.

“We’ve got a lot of talent and we’ve got a lot of pride and these guys have been to the finals five straight years for a reason,” Warriors coach Steve Kerr said. “They’re unbelievably competitive. And they’re together, and they’re going to fight. They’re going to fight the whole way. So we’ll go try to get one win and, if we can do that, come back (home) and see what happens.”

Michael Jordan scored 759 in 1992. James scored 748 last year. Hakeem Olajuwon scored 725 in 1995. Allen Iverson scored 723 in 2001. Leonard is now in their club, their level of elite. And if a second finals MVP trophy comes, Leonard would join only James and Kareem Abdul-Jabbar as players to claim one of those with multiple franchises.

“It doesn’t matter,” Leonard said, “until you get that fourth win.”

That’s the one he’ll aim to get on Monday.