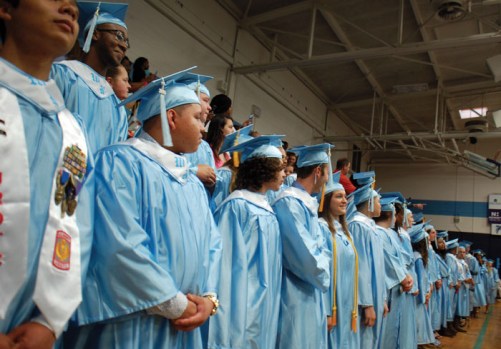 Mark Wineka/Salisbury Post Some of the soon-to-be graduates of West Rowan High stand for opening ceremonies Saturday morning in the school gymnasium in 2019. 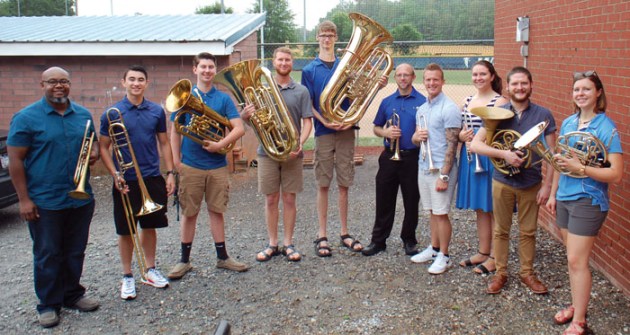 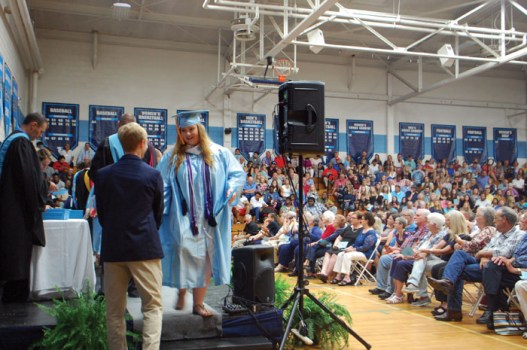 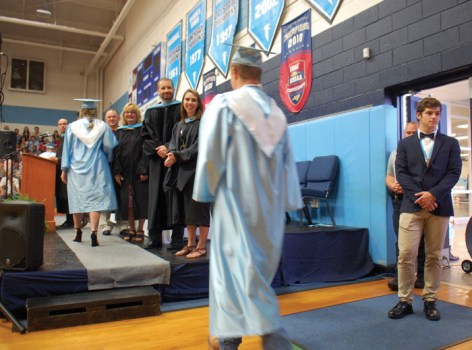 Mark Wineka/Salisbury Post Caleigh Page Bostian (on stage) and Luke Riley Bradshaw (foreground) head through the receiving line of school administrators and Rowan-Salisbury Board of Education member Travis Allen as they receive their diplomas Saturday morning at West Rowan High.

MOUNT ULLA — When Matthew Ramsay was 5, his “Pap” would round him up and say, “Let’s go see what we can see.”

So off the pair went to explore, just as class president Ramsay and the 260 other graduates of West Rowan High will do now, heading off to the military, going to college, starting jobs and maybe even traveling across the world.

“I have faith in each and every one of you,” Ramsay told his classmates. “As Falcons, we’ve been given wings to fly.”

The class of 2019 represented the 60th graduating class of West Rowan High School, and Saturday’s ceremony was held in the school gymnasium and also streamed in the auditorium for the large crowd.

The West Rowan High Alumni Brass Band, which was 10 members strong and under the direction of Daniel Trivette, provided music for the processional and recessional. The West Rowan High Junior ROTC Color Guard presented the colors.

While the day’s rainy forecast forced the graduation to be moved from the football stadium to the gymnasium, the ceremony went off without too many glitches, except for a short time during the handing out of diplomas when the school fire alarm went off.

Someone said to chalk it up to a senior prank.

Cole said she already has found herself reflecting on her four years at West Rowan, realizing how important it was to enjoy the little things, while appreciating the laughs shared and both the highs and lows.

“I hope to go into my next four years with the same mindset — to never take time for granted,” Cole said.

Patterson said the best lesson she learned was not necessarily in the classroom but in the realization she should stop comparing herself to others — and that can be difficult to do, living in a social media world driven by likes, tweets, retweets and shares.

Every person graduating Saturday will be on a different path with his or her unique set of talents and skills, Patterson said.

“Be the best version of yourself,” she told her classmates.

Keys recalled how maybe the graduates entered West Rowan a bit lonely, scared and anxious and how they were leaving Saturday surrounded by friends they called family.

“We are ready,” Staley said in her remarks. “We are worthy for what is to come in the journey ahead. Spread your Falcon wings and rise above the obstacles.”