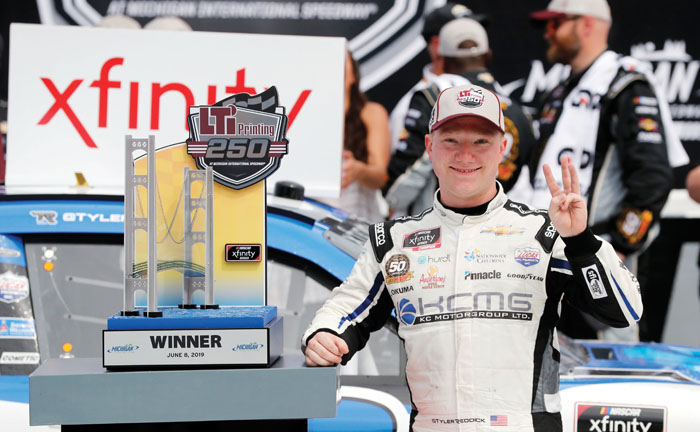 There was no need to try to pass them.

“As much as I wanted to run down the guys in front of us, it became very obvious that they weren’t going to make it on fuel,” Reddick said.

Sure enough, Custer and Bell had to make pit stops, and Reddick took the lead with about 10 laps remaining. It was smooth sailing the rest of the way for Reddick at Michigan International Speedway on Saturday. He won for the third time in the past five races and the sixth time in his career.

Reddick increased his series points lead to 89 over the second-place Bell.

“We just had to run our race at the end there and just make sure we saved enough fuel, in case we had an overtime at the end of the race, but it didn’t fall that way,” Reddick said.

“We had a really fast Mustang. I really wanted to win here for Ford in their backyard and everything,” Custer said. “We got the track position and got up front and I think we had the best car here. I don’t know how much the 2 was saving there but the strategy just didn’t work out for us. That one kind of stings but I definitely feel like we had a fast car.”

Reddick has finished in the top 10 in every race but one this season. He had six top-five showings before his first win, at Talladega.

“To be that good every single race, my confidence going into the race … is just higher than it’s ever been before,” he said. “Even when things don’t go our way, we’re still having fun. If we have a bad stop or we slide through, we’re not freaking out. It’s not the end of the world, because we know we’re good enough as a group to get back up there.”

“We have a lot of fun.” Burnett said. “He slid through the box that first stop a little bit. Instead of making a big deal out of it, we asked him if he could reach the brake pedal. So we were just teasing him a little bit. We like to have fun. We take it very seriously, but I think we work well because we like to have fun and we know we’ve got each other’s backs. He’s done an incredible job this year.”

Almirola is getting used to that feeling.

Logano won his second NASCAR Cup Series pole of the season Saturday, while Almirola again fell just short of the top qualifying spot. Almirola has one pole this year but is set to start in the No. 2 spot for the fourth time.

“Close but no cigar. What is that old saying — close only counts in horseshoes and hand grenades?” Almirola said. “That is frustrating to get that close to getting a pole that often and only have one pole. We seem to always get beat just by a little bit by somebody different every time.”

It’s actually happened more than once with Logano. Almirola qualified second behind the Team Penske driver at Martinsville , too.

This was Logano’s 22nd career pole and fourth at Michigan International Speedway. He’ll try for his second victory of the season Sunday. Kevin Harvick qualified third.

Logano’s speed was noticeably slow at a track where a few years ago, drivers would routinely post laps above 200 mph.

“We used to be hauling the mail around here in qualifying and you would get the shakes afterward,” Logano said. “Today was more about precision and making sure you hit the line with what you are looking for and hitting your shift points and gaining as much speed as you can up to speed, and then just doing what your game plan was before you got out there and maximizing that.”

Of the 99 previous Cup races at Michigan, 21 have been won from the No. 1 starting position. That includes victories by Logano in 2013 and 2016. Fewer than half of those races (47) were won by someone who started outside the top four.

BACK IN THE PACK

Joe Gibbs Racing has already accounted for nine victories this season, but Denny Hamlin was JGR’s only driver in the top 10 in qualifying. He was fourth.