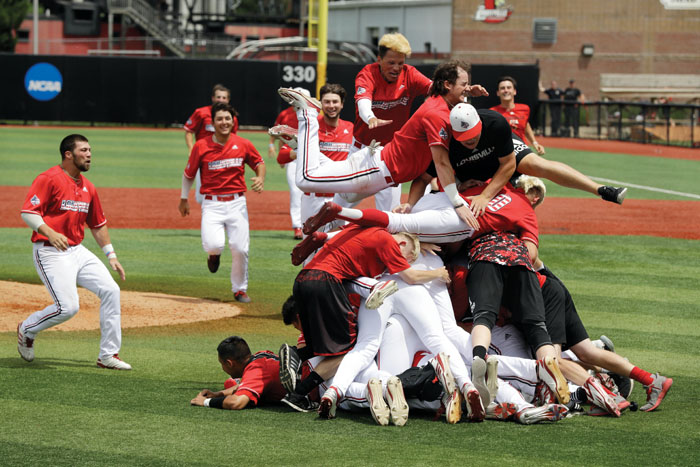 LOUISVILLE, Ky. (AP) — Bobby Miller’s awareness of the so-called jinx that cautions against knowing about potential no-hitters didn’t stop the Louisville right-hander from being curious about his achievement.

When his remarkable attempt fell short with a solid ninth-inning single, Miller wasn’t disappointed because he fulfilled his objective of getting the Cardinals back to the College World Series.

Miller carried a no-hitter into the bottom of the ninth inning, Justin Lavey had three RBI and the Cardinals beat East Carolina 12-0 on Saturday to sweep the NCAA super regional and reach its fourth CWS since 2013.

Important as that goal was for the seventh-seeded Cardinals, Miller’s flirtation with a no-hitter held the attention.

Miller (7-1) hit Chandler Jenkins with a pitch to start the ninth before Thomas Francisco singled through the hole to right to end his bid for the Cardinals’ first no-hitter since March 26, 1983 by Dave McCormick against Cincinnati. It would have been the eighth no-hitter in NCAA postseason history and the first in a super regional. Michael Kirian relieved the sophomore right-hander, who walked off to a standing ovation and hugs from teammates. Miller struck out five, walked two and hit a batter in facing 27 batters.

“Not really upset honestly, it could have come eventually,” Miller said. “I have to give credit to them, they are a great team. They are super hard to get out, I don’t blame them honestly. I had all the faith in the world in Kirian, he’s a great pitcher. I knew he was going to come in and shut it down.”

Kirian walked Bryant Packard to load the bases before a double play at the plate. He then hit Alec Burleson before Jake Washer’s game-ending fly to center to preserve the shutout. Louisville earned its fifth trip to Omaha, Nebraska, and second in three years.

Lavey hit a two-run double in the third and doubled in another run in the ninth for the Cardinals (49-16)  who scored three runs each in the second, third, fifth and ninth innings. Louisville outscored No. 10 seed ECU (47-18) 26-1 and allowed just eight hits in sweeping the best-of-three series.

“I don’t know if it gets more complete than that,” Cardinals coach Dan McDonnell said. “Two quality starts, with double-digit runs and a big lead, against one of the top teams in the country. Fortunately, we jumped on them early.”

For a while, the Pirates seemed destined to settle for seven hits thanks to Miller’s remarkable pitching.

His fastball remained well above 90 mph even into the ninth, while his breaking balls and inside pitches frustrated ECU.

The combination kept Miller perfect until the third, when he allowed a third-inning walk to Dusty Baker before getting an inning-ending double play to stay on track for the minimum 27 batters.

Louisville’s offense meanwhile continued clicking offensively with 14 hits a day after piling up 18 in Friday’s 14-1 shellacking.

Lavey was 3-for-3 while Drew Campbell was 3 for 5 with two RBI delivered with a second-inning triple off Burleson (6-2) that got the Cardinals started. Campbell eventually scored on a wild pitch.

That turned out to be all the support Miller needed, though they continued hitting the ball well. Especially the bottom of the order, where Lavey, Campbell and Davis combined for six hits and seven RBI. Leadoff hitter Lucas Dunn had two RBI.

Rough as the weekend ended for an ECU squad hopeful of reaching its first CWS, Pirates coach Cliff Godwin said he urged his players not to dwell on the outcome, just continue working toward that trip to Omaha.

“I just wish we could have played better here,” he said. “Louisville played unbelievable baseball for two days. We just ran out of gas.”

Added shortstop Turner Brown, “This weekend doesn’t define our season. I think we are a national team now. We’ve molded the foundation to get us there.”

On the brink of elimination in last weekend’s regional, Louisville rebounded with three wins and has now won five in a row. The Cardinals became the first qualifier for the next weekend’s CWS.

The threat of severe weather resulted in the game being moved up three hours to a noon start. Overcast skies hovered at the start, but rain never fell and the sun even broke through by game’s end.