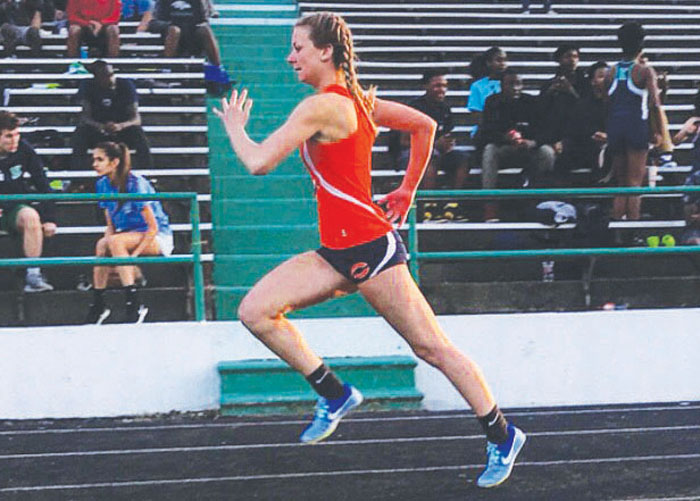 Facebook photo ... Carson’s Grace Leget is shown during a high school track meet at A.L. Brown in Kannapolis. Leget has announced that she will continue her education and track career at Catawba College.

That doesn’t mean she spends her free time bungee jumping or crashing race cars, but it does mean she’s always on the move and needs to stay busy all the time.

Her dream career is becoming a flight nurse. That’s a challenging life. It would mean boarding a helicopter and providing pre-hospital care to patients during emergency evacuations or rescue operations.

“I thought about becoming a more regular nurse, maybe working in an emergency room,” Leget said. “But the more I learned about flight nurses, the more I wanted to do that.”

The road starts with a college degree. Catawba has a strong nursing program and should be a good fit for Leget.

The 5-foot-7 sprinter received an offer from the Indians back in January to join their growing track and field program, so things have fallen into place for her.

“I wasn’t looking to go far away to college,” Leget said. “I’d emailed area schools about my running and one of them was Catawba. Catawba came to our meet in Winston-Salem and I got a great offer not long after that.”

Leget grew up in Faith. She poured her considerable energy into competitive cheerleading until she reached high school. That’s when she caught the bug to try something different.

“I’d always  enjoyed running and was an OK runner, so it seemed like the right sport, a sport that would be fun,” Leget said. “I liked that it was something you could work on as an individual, but there also was a team involved.”

Leget went out for the Carson squad as a freshman. While she was welcomed with open arms, she found she had a whole lot to learn.

“I remember my first indoor meet —I was in the 55 meters and I didn’t have any idea how to use starting blocks,” Leget said. “Fortunately, one of our coaches at Carson, Barry Mitchem,  took an interest in me. He showed me how track worked. He saw some potential in me and he taught me a lot. By my sophomore year, I was starting to see I had a chance to be a factor on our track team if I would put in the work, and I was willing to work.”

While success didn’t happen immediately, Leget figured out during her freshman year that she loved track and field. She loved competing and loved being part of something bigger than herself. Supporting and cheering for her teammates came easily for her. She had some experience at it.

“Grace is a hard worker who constantly wants to improve,” Carson head coach Les-lee Ihme said. “She always does little things on her own, whether it’s going to get in extra time on the track at Catawba or training during the off season. She strives to improve.”

Leget has made practice runs in the fall with Ihme’s Carson cross country team to improve her conditioning,

She made substantial progress in the sprints every year — shaving off several seconds from her freshman times —  but her best memories of Carson track and field are always going to be team memories.

“We didn’t have a large team — 19 girls this year,” Leget said. “But we made a lot of history. We won the county championship three straight years and we won the North Piedmont Conference the last two years. County and conference, are two really big things. We worked hard for those championships, and it was awesome to see that work pay off.”

“We were struggling in the long jump this year, so we asked Grace to try it,” Ihme said. “She worked to learn the steps and she did well. She scored in several meets.”

She ran on the third-place 4×100 relay team in the county meet. That relay team placed fourth in the NPC.

“I know I can still improve a lot more,” Leget said. “I’m going to run and lift this summer, and I’ll be in the weight room at Catawba a lot, working on getting stronger and bigger.”

Ihme said she’ll miss Leget. She was one of the quiet cogs in a championship team.

“Grace was a staple for the program, running all four years she was here, and she was instrumental in five championships,” Ihme said. “She’s going to be hard to replace because if we needed her to fill an event, she would, and she would do it without complaint.”