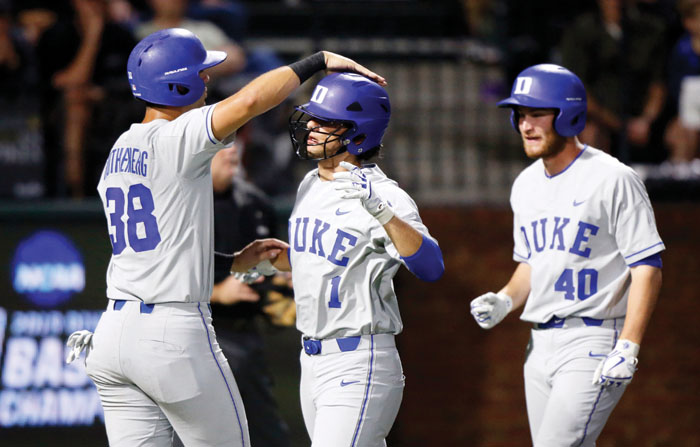 NASHVILLE, Tenn. (AP) — Kyle Gallagher hit a three-run home run and had four RBIs as the Duke Blue Devils routed Vanderbilt 18-5 in a game that ended early Saturday morning to take the opener of the Nashville Super Regional.

The Blue Devils (35-25) also snapped a 12-game winning streak by Vanderbilt, the nation’s No. 2 overall seed to move a win from its first College World Series berth since 1961.

The Commodores (52-11) have lost five super regionals when dropping the opener. They had never allowed this many runs in this round.

Duke and Vanderbilt waited out a 3-hour, 10-minute weather delay before finally starting Friday night, and the Blue Devils handled the wait better as they handed Drake Fellows (12-1) his first loss.

Gallagher’s homer put Duke up 6-2. Duke turned the game into a rout adding 10 in the eighth highlighted by three batters hit by pitches and a pair of runs walked in with the bases loaded.

BATON ROUGE, La. (AP) — Reese Albert hit a three-run, game-tying homer in the seventh and added a solo shot in the ninth, and Florida State opened the NCAA’s Baton Rouge super regional with a 6-4 victory over LSU on Saturday.

J.C. Flowers, who started the game in center field, went to the mound in the eighth and recorded six outs for his 12th save this season.

Florida State coach Mike Martin, who plans to retire after this season, is now one victory away from his 17th College World Series trip since taking over the program at his alma mater 40 seasons ago.

LSU took a 4-0 lead with single runs in the second through fifth innings. Josh Smith had two hits and scored twice for the Tigers (40-25), while Chris Reid added two hits and singled home a run.

Florida State (40-21) didn’t have a hit until Robby Martin’s single to right with one out in the sixth against LSU reliever Todd Peterson. Drew Mendoza advanced to third and scored FSU’s first run on Matheu Nelson’s infield hit on a high chopper to third.

Albert tied it when he launched Trent Vietmeier’s 3-2 pitch over the right field bleachers with two runners on in the seventh. The towering shot came after Albert had fouled off five straight two-strike pitches.

Nelson walked against Devin Fontenot (5-3) with one out in the eighth and scored the go-ahead run on Tom Becker’s sacrifice fly to left.