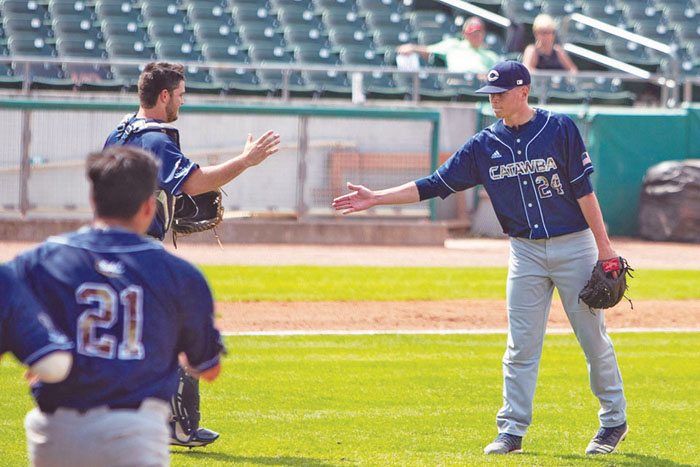 Photo courtesy of Leslie Poteat ... Catawba closer Peyton Williams, right, is shown with catcher Cam Morrison, left, after getting the last out of the SAC Tournament championship game on April 29, in Kodak, Tenn. Williams, from Montgomery County, was drafted and signed by the Atlanta Braves late last week.

SALISBURY — Peyton Williams has a fastball that tops out at 97, but it was the addition of a curveball that made him virtually unhittable this season as the closer for the Catawba Indians.

Williams didn’t allow an earned run after April 2. There were plenty of zeroes in his last 10 relief appearances — except in the strikeout column.

“Early in the season, we were a little tentative about going to him,” Catawba head coach Jim Gantt said. “But by the end of the season, there was never any doubt. Just lights out.”

Williams, who was taught the intricacies of the curveball this season by Catawba’s young pitching coach Russ Weiker, will fly Friday afternoon to Sarasota, Fla., to the new complex of the Atlanta Braves. He reached agreement quickly with the Braves on the amount of his signing bonus after he was picked in the 20th round on Wednesday, the third and final day of the MLB draft.

Williams was draft-eligible because he turned 21 last month, but he still had two seasons of college eligibility remaining. He had some negotiating leverage.

“I got calls from two teams during the draft, the Seattle Mariners during the 14th round and the Oakland Athletics during the 17th round,” Williams said. “Both told me what they could offer me to sign, but it was too low to leave school for.”

Catawba was eliminated from Division II’s version of the World Series in Cary on Tuesday.  Williams cleaned out his locker in Catawba’s clubhouse on Wednesday as the rapid-fire last day of the draft rolled from rounds 10 through 40. He’d hoped to be drafted as early as Tuesday, as he’d had extensive contact this spring with the Mariners, Braves, New York Mets, Los Angeles Dodgers, Colorado Rockies, Milwaukee Brewers and Baltimore Orioles, among others.

“I really thought it would be the Mariners or the Dodgers,” Williams said.

But after saying no thanks to the Mariners and Athletics, and with the 18th round speeding by and disappointment starting to close in, Williams switched his thoughts from the draft to returning to Catawba for his junior year. He got in his car and headed for his hometown of Candor in Montgomery County. He was eastbound on Highway 64, when his phone buzzed. It was  a familiar number —  Billy Best, the former East Carolina Pirate who is the area scout for the Braves.

Williams explained to Best that he was driving.

“You’re about to become an Atlanta Brave, so you might want to pull over,” Best said. “Are you ready to be a Brave?”

Williams did pull over. When Best relayed the Braves’ offer, Williams was ready to be a Brave.

“Living in North Carolina, the Braves are the closest team,” Williams said. “So I’ve been a Braves fan for a while.”

He pitched some as he grew up — every coach could see he had a strong right arm — but mostly he swung a bat and flashed a steady glove. He was a terrific infielder.

He played for coach Ronnie Pugh and the strong Post 45 Randolph County American Legion program. In 2017, after Williams’ senior season at East Montgomery High, Post 45 won the Southeast Regional and headed for the World Series in Shelby. The catcher for Post 45 was a young man who had just finished his freshman season as Catawba’s backup catcher — Cameron Morrison.

Williams shined at second base in that 2017 Legion World Series. He made the all-tournament team, batting .385 and handling 26 chances at second base without an error. He made a diving catch behind second base against Idaho that got him on ESPN as one of the plays of the day.

His next stop was Pfeiffer University in the fall of 2017. Dusty Blake, who is now the pitching coach at Duke, was Pfeiffer’s head coach. He knew Williams had a good arm and knew he’d pitched some.

“I  remember I threw a bullpen for him,” Williams said. “I was throwing 88, 89. He told me that I wouldn’t be playing in the field any longer, that they needed me to pitch. He told me making the move to the mound would pay off for me one day.”

In the summer of 2018, Williams continued his maturation as a full-time pitcher with the Asheboro  Copperheads of the Coastal Plain League.

“I’m still learning a lot about mechanics,” Williams said. “I really didn’t know anything about pitching until college, and I realize I still don’t know everything.”

He transferred to Catawba for his sophomore year of college. In Salisbury, he was reunited with Pugh, who was in his first year helping Gantt as a Catawba assistant, and Morrison, Catawba’s starting catcher the past two seasons.

There’s not a ton of mileage on Williams’ relatively fresh arm. He has continued to gain velocity. He was consistently firing at 94 and 95 this season, peaking at 97. He turned in a sensational year, with 55 strikeouts in 37 innings. He was 4-1 with 12 saves. When Catawba (47-14) put the ball in Williams’ hands in the ninth inning with a lead, it was over.

“He throws hard, but adding that curveball made a difference for him,” Gantt said. “We hate to lose him, but at the same time, when one of your guys gets drafted, it’s win for everybody.  We only had him for a year, but he was outstanding.'”

Catawba didn’t have a player drafted by MLB in 2018, but that was the exception rather than the rule. Catawba has had 17 players drafted in the last 12 years. Closer Bryan Blanton (New York Yankees) and catcher Zac Almond (Arizona Diamondbacks) were taken in the 2017 draft. Will Albertson, a 2016 pick by the San Francisco Giants, is no longer active, but 2015 draft choice Craig Brooks (Chicago Cubs) still has a chance to reach the majors and is dominating as a closer in Double A.

The Braves have two rookie-level teams that start play this month. Williams is likely to begin with the Gulf Coast League Braves. The next step for him would be the Braves’ more advanced rookie team in Danville, Va., in the Appalachian League.