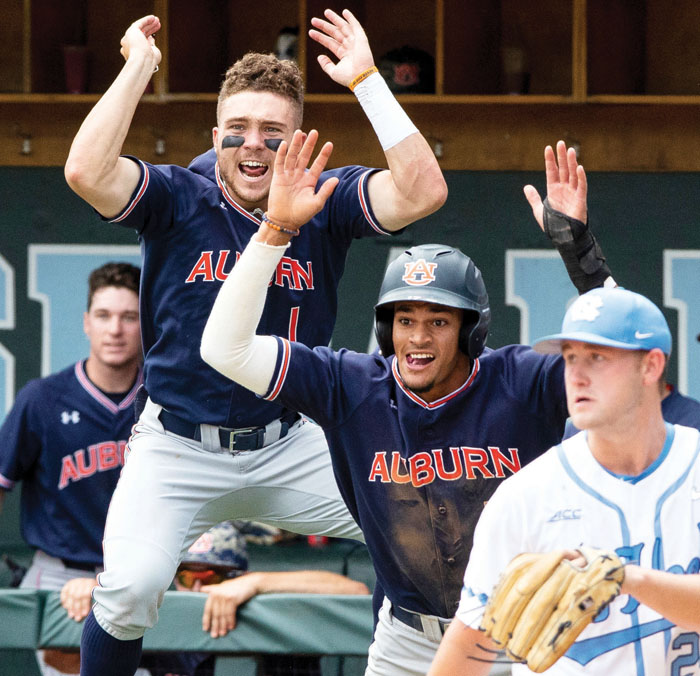 CHAPEL HILL (AP) — Rankin Woley had a 3-run double in the eighth inning, Edouard Julien a 3-run homer in the ninth and Auburn scored nine runs in the last two innings on Saturday to rally for an 11-7 win over North Carolina in the first game of the Chapel Hill super regional.

Tar Heels’ starter Tyler Baum left with one out in the seven inning having allowed just four hits and a 4-2 lead. But five relievers gave up nine runs on six hits. Before the outburst, the Tigers’ (37-25) only runs came on a 2-run homer by Steven Williams in the fifth.

Conor Davis drove in a run with a double in the eighth and another scored on a wild pitch before before Woley’s double to right center gave Auburn its first lead at 7-5. A single and two walks loaded the bases in the ninth. Kason Hollard hit a sacrifice fly before Julien drive to right field for his ninth home run.

Jack Owen gave up four runs on eight hits in his start for the Tigers. Elliott Anderson (7-2) took over in the sixth with Cody Greenhill pitching the last two innings for his 12th save.

Joey Lancellotti  (6-3), who gave up Woley’s double, took the loss without recording an out.

Game 2 in the best-of-three series is Sunday.

Carolina third baseman Ike Freeman (East Rowan) had a hit and walked with the bases loaded. He had two RBI.

Freeman, a junior, was drafted last week by the Cleveland Indians but he cannot sign until after the Tar Heels’ season.

A story on Freeman is upcoming in The Post.