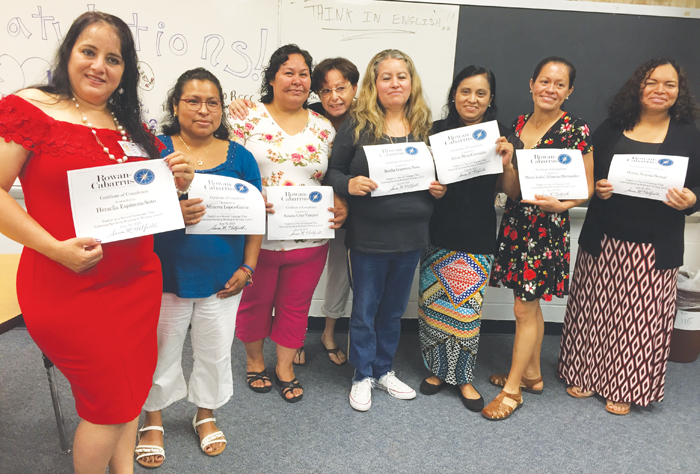 KANNAPOLIS — As a group of seven mothers gathered in a classroom at Wilson Elementary School, Maria Isabel Albarran-Hernandez hooked an arm around her son Josemaril and pressed a kiss against his cheek.

“Este es mi teacher,” she says, meaning, “This is my teacher.”

Albarran-Hernandez was one of many giving credit for personal accomplishments on Thursday, but the gathering was a moment of celebration for the assembled seven. Since January, the group has completed Level No. 1 in an English as a Second Language course offered through Rowan-Cabarrus Community College.

The classes were held on the school campus, an effort brought about through ESL teacher Christopher Goodnight.

Goodnight began his work in the ESL department in August, saying he immediately saw a glaring need on campus.

And he came at the situation with a personal perspective. His wife is from Ecuador, and he has seen first hand the struggles of learning a second language in adulthood.

His wife had taken ESL offered at Rowan-Cabarrus Community College’s South Campus, but even that was a struggle, he said.

“When you have a job, when you have to cook dinner and you have to do all these other things, it was hard,” he said. “That was one of the reasons why I had the idea of thinking, ‘Oh, it should be here within our own community so that people feel like they’re connected with the school.'”

So he reached out to college instructors Sonia Hatfield and Elise Holmes to get the program off the ground and running in January.

Principal Mandi Campbell said the tactic was quite effective in increasing engagement.

“I started at Fred L. Wilson in 2012,” Campbell said. “I’ve had some of these parents since their kids were in pre-k. They would have never come in and interacted with me or scheduled a conference like they do now. This class has given them a whole new level of confidence.”

“This class has helped me so much with reading and speaking and understanding,” she said. “I can understand better, and I can speak more than when I started this class. My sons know I can do more. I need more, and I’m going for more.”

Holmes said that interaction within families is a critical facet of understanding for the English-language learners.

“I tell the mothers, ‘Speak with your children,'” she said, “because they know. And tell your children not to laugh, because you’re learning just like they are.”

Holmes said she provided the group materials to continue learning through the summer, before Level No. 2 classes begin in the fall.

Goodnight said the program will be expanding when it returns as school starts in late August. The program will then be available for any Kannapolis resident, regardless of connection to the school.

“This is the No. 1 thing, the greatest obstacle our families need to get over before anything else can happen for them,” he said. “We’re hoping next semester to double if not triple in size.”