Now hear this: After 90 combined years with Beltone, the Wades move toward retirement 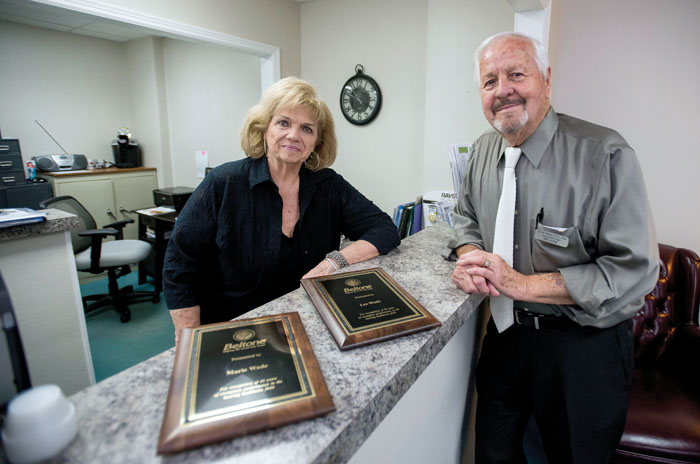 SALISBURY — Lee Wade has a million of them.

He says he once told a photographer there was only one thing that bothered him about a picture he had taken of Wade.

“What’s that?” the photographer asked.

Wade, soon to be 84, has been posing for pictures lately because he says he’s going to retire after 50 years as a licensed hearing instrument specialist and franchise owner for Beltone.

His wife, Marie, who has 40 years with Beltone herself as the office manager in Salisbury, is going out the door with him.

Or so they say. It’s especially tough to pin down Lee on an exact retirement date. He says “sometime this year” because this is a man who has always loved going to work — and still does.

“I’d rather be an hour early than five minutes late,” he says.

The couple’s serious talk about retirement comes as the family’s two Beltone offices prepare to move from longtime locations at 1921 W. Innes St. in Salisbury and 213 N. Main St. in China Grove.

By the first week in July, those two offices will consolidate into one new location in Klumac Square at 512 Klumac Road.

“It’s going to be a great move for all of us,” says Angela Melton, the Wades’ daughter who has long run the Beltone office in China Grove.

Joining Angela to run the new Salisbury office will be her nephew and the Wades’ grandson, Matthew Thomas, who has worked at the Salisbury Beltone for several years. They’re both licensed hearing instrument specialists, too.

Delores File, the office coordinator and secretary in the China Grove office, will join Angela and Matthew in Salisbury.

Earlier this year at the company’s national convention in Orlando, Florida, Beltone recognized Lee and Marie with 50-year and 40-year plaques, respectively.

“You know, it doesn’t seem that long,” Lee says. “Fifty years went ‘Bam!’ — so fast. It’s in my blood after that many years. I love people. I love helping people.”

The couple shake their heads, thinking how far hearing-aid technology has advanced from the time they started. They smile now at the clunky ear molds patients used to wear.

“It’s crazy,” Lee says. “The difference is like night and day.”

Lee recalls when he used to visit people’s homes, conduct hearing tests over kitchen tables, and mix up a powder and liquid to form a paste that he pushed into people’s ears to form the molds.

Now the technology has advanced to where hearing aids are hardly noticeable, and the Wades readily admit the auditory results are much improved.

Many better options exist for keeping batteries charged, and hearing aids rely on wireless and digital technology that allows the Beltone staff, say, to make adjustments from the office for a patient in another state, if required.

Bluetooth technology can funnel telephone calls and music directly into hearing aids now, among other things.

In the hearing-aid business, you often develop relationships with patients covering many years. Lee, Marie, Angela and Matt have received their share of hugs from patients who discover how much they’ve been missing once they have new hearing aids.

Through the years, patients often have called Lee “Dr. Wade.”

A native of Danville, Virginia, Lee Wade sold insurance for 11 years out of a Greensboro office before a former colleague coaxed him into joining his Beltone franchise in 1969.

By 1974, Wade moved the family from Greensboro and bought his own franchise in Salisbury, setting up a small, three-room office at 124 W. Innes St. Marie joined him as office manager in 1979.

Daughter Lisa Thomas joined the China Grove office in 1988 before eventually moving with her family to Spruce Pine and starting her own hearing-aid business, though hers was independent of Beltone.

Angela took over the China Grove office in 1994 and has been a mainstay ever since, dividing her time between there and Salisbury. Matthew Thomas joined the Salisbury Beltone office 11 years ago.

So the hearing-aid business is a real family affair, with Lee, Marie, Angela and Matt collectively having more than 125 years of experience with Beltone.

Angela says her father taught her how to be loyal, take care of people and give good customer service. “This is something that he’s loved,” she adds. “It has been his passion.”

Marie says she still comes into the office about twice a week.

“She was the backbone for us for so many years,” Angela says. “She took care of the front end and kept all of us straight.”

That’s not easy when you have a husband of 60 years who always seems to be cutting up.

Angela notes how corny her father’s jokes or sayings can be and knows she has heard him say certain things 500 times. But they also help patients relax and feel comfortable, she says.

Lee tells patients his parents were English and Irish and that they worked in the iron and steel business.

“My mother ironed, while my daddy stole,” he says, laughing.

Or he remembers the patient who told him he has a kind face — “the kind you want to throw rocks at.”

Why has Lee Wade stuck with Chicago-based Beltone for so long? He says the company has always been a leader in its field, and, “They’ve been good to me, and I’ve been good to them.”

In retirement, when it comes, Lee expects he’ll tend to his vegetable garden and work around the house. Marie promises they will find things outside the office.

“We’ve never had a lot of time to do a lot of traveling,” she says.

But for now, they want to help Angela and Matt make the big move to Klumac Square.

For the record, Lee and Marie both wear top-of-the-line hearing aids. That means they definitely hear their retirements coming.

D-Day remembered: ‘I only know that I was scared…