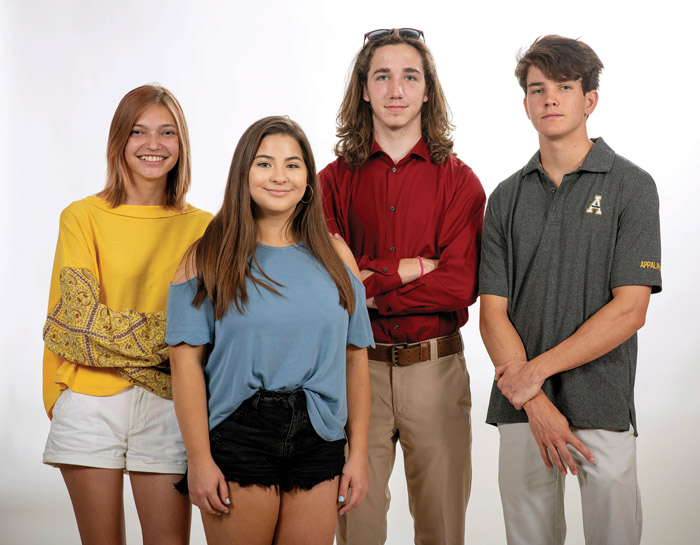 In the fall, he will study computer science at Appalachian State University with a hope to create computer software that can make a positive impact on people’s lives.

During high school, he lettered in football and golf and was a member of Key Club, the Fellowship of Christian Athletes and the National Honors Society.

Defining moment in my life: In the summer of 2017, I went on a mission trip to Guatemala. This was an eye-opening experience seeing the pure poverty and daily struggles these people had to go through on a daily basis. Ultimately, this experience humbled me and made me a better person.

Secret to high school success: Remain focused while having as much fun as possible.

Emily Virginia Hartsell is the daughter of Robert and Jennifer Hartsell of Salisbury. A senior at North Rowan High School, she attended Elizabeth Hanford-Dole Elementary School and North Rowan Middle School. In the fall, she will attend the University of North Carolina at Chapel Hill and will major in human development and family studies and psychology with a goal of becoming an elementary school teacher.

In high school, she played played varsity volleyball and soccer, serving as co-captain of the volleyball team and DECA club president and treasurer.

Caylinn Helm is the daughter of Richard and Christina Helm of Salisbury. A senior at North Rowan High School, she attended Hanford-Dole Elementary and North Rowan Middle School.

She lettered in varsity tennis during her time in high school.

Secret to high school success: I would say the secret to my high school success would have to be the support network I’ve made with my friends. Without them, I don’t believe I would have been able to accomplish half of what I have. They’re my motivators and help keep me focused when my thoughts often stray.

If I had $10 million: If I had $10 million, I would immediately pay off any debts in my family and pay for mine and my siblings’ education. I would take a fourth of what was left over and use it to treat my family to a vacation or gifts, and I would split the rest of the money between multiple money market accounts so that they can gradually accrue interest.

Jared Patrick Niles Hensley is the grandson of Keith and Linda Hensley of Salisbury. A senior at North Rowan High School, he attended Overton Elementary and North Rowan Middle School. In the fall, he plans to attend the University of Michigan in Ann Arbor, Michigan, with an expected major in mechanical engineering and environmental science. His goal is to become a mechanical engineer and apply that knowledge to solving environmental issues.

A defining moment in my life: In AP biology of my junior year, I didn’t know anyone, so I sat in the back of the class and learned to tie knots. It was there that I realized the power of simple tools when paired with ingenuity and a new door of inventiveness was opened.

The secret to high school success: I took classes and participated in activities that I found interesting and made the most of the opportunities I was provided.