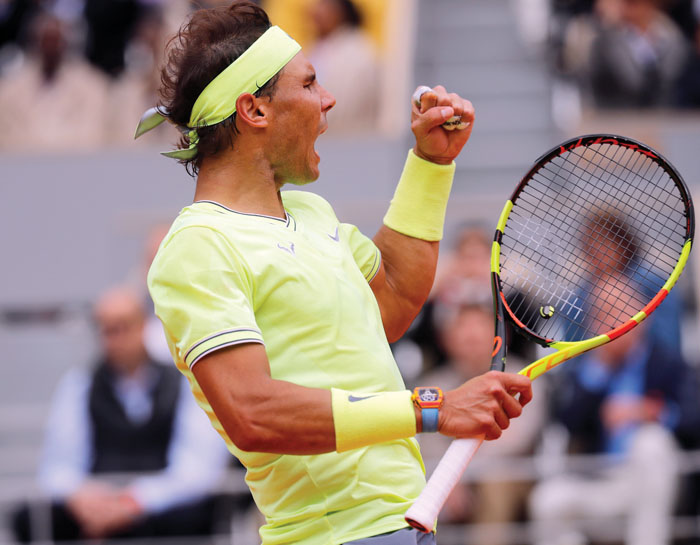 Spain's Rafael Nadal clenches his fist after scoring a point against Switzerland's Roger Federer during their semifinal match of the French Open tennis tournament at the Roland Garros stadium in Paris, Friday, June 7, 2019. (AP Photo/Michel Euler)

By HOWARD FENDRICH AP Tennis Writer
PARIS (AP) — It’s rough enough for Roger Federer — well, let’s be honest, anyone holding a tennis racket — to try to deal with Rafael Nadal’s unflinching excellence on the French Open’s red clay.
Mix in a wild wind, and Federer, so great for so long, against anyone else and anywhere else, morphed into merely good. And good, even Federer’s brand of good, was not nearly enough Friday.
Nadal made quick work of Federer in their first meeting at Roland Garros since 2011, outperforming his rival 6-3, 6-4, 6-2 in air whipping at more than 20 mph (12 kph) to reach his record 12th final in Paris as he pursues his record 12th championship.
This was Federer’s most lopsided Grand Slam defeat since he gathered a measly four games in a loss to — guess who? — Nadal in the 2008 French Open title match.
“He makes you feel uncomfortable the way he defends the court and plays on clay. There is nobody who even plays remotely close to him,” said Federer, who hadn’t entered the tournament since 2015. “I don’t even know who I need to go search for, to go practice with somebody who plays like him. I was thinking that during the match.”
Nadal has never lost a semifinal at the clay-court major. Never lost a final, either. When told of those facts, Nadal replied, matter-of-factly: “It’s incredible, being honest.”
He’s also never lost to Federer at Roland Garros, improving to 6-0. Overall, Nadal leads their series 24-15. Federer had won their past five meetings, but those were all on hard courts.
It’s a whole different task to take on Nadal on clay, in general, and at the French Open, in particular, where he is 92-2 for his career.
In Sunday’s final, the No. 2-seeded Nadal will play No. 1 Novak Djokovic or No. 4 Dominic Thiem. Their semifinal, played second Friday, was suspended for the day in the third set because of rain in the evening. Thiem was leading 6-2, 3-6, 3-1 when play was halted. About 45 minutes later, officials announced the match would resume Saturday. That means whoever wins would be competing for a fourth day in a row in the final against a well-rested Nadal.
This was the first time since 2011 the four top-seeded men were in the Roland Garros semifinals.
In the women’s final Saturday, No. 8 Ash Barty will face unseeded 19-year-old Marketa Vondrousova of the Czech Republic. It’s the first time either has played for a major title.
Nadal, meanwhile, is bidding for his 18th. Among men, only Federer has more, with 20.
Like so many times before, it was Nadal’s topspin-heavy lefty forehand, his relentless ball-chasing and his return game that gave Federer fits. Even frustrated the guy so much that the generally stoic Federer smacked a tennis ball toward the stands after getting broken to trail 2-1 in the third set.
It would soon be over.
“It’s just amazing how he plays from deep and then is able to bounce back and forth from the baseline,” Federer said. “I didn’t play a poor two first sets, in my opinion. I thought Rafa really had to come up with the goods to make the difference, and the difference was a passing shot here, a pickup there.”
Blithely put. The fact is, Nadal’s passes and pickups — not to mention his reflexes — are not of this world.
More than once, he slid to his right, beyond the doubles alley, to extend a point by retrieving the seemingly irretrievable with a backhand, then followed it up by sprinting to his left for a jaw-droppingly precise forehand that flew out of Federer’s reach and veered to land near a line.
And more than once, Nadal punctuated the point by pumping his fist and yelling, “Vamos!”
The wind was so unchecked that it knocked a tarp off its moorings behind a baseline. It tossed loose dirt from the court into both players’ eyes, so much so that Federer joked it felt as if they were playing in a sandbox. There was also drizzle and temperatures of about 60 degrees (15 Celsius).
Enough to make one wish the retractable roof due to be installed before the 2020 French Open were already in place.
Even Nadal described the conditions as “so hard, so difficult to manage.”
“It’s just really complicated, you know,” Federer said. “So you’re trying to see how much can you do — or you cannot do. Are you playing flatter or with more spin? Are you keeping the ball in play? Are you going for stuff?”
With an aggressive, charge-to-the-net style, he had been broken a total of only four times by his first five opponents. But Federer was more hesitant against his nemesis, and Nadal won 6 of 13 return games.
The 37-year-old Federer was serenaded off the court by spectators’ chants of his first name. He raised his right arm for a quick wave as he walked away — perhaps for the final time. He missed the tournament in 2016 with a bad back, then skipped the entire clay-court circuit the next two years to prepare for grass and hard courts.
“I surprised myself, maybe, how deep I got in this tournament and how well I actually was able to play throughout,” Federer said. “And next year? Just like with any other tournament, I don’t know. We’ll see what happens.”
For Nadal, this was the latest impeccable performance in a recent resurgence. He entered May without a title in 2019, his worst start to a season in 15 years.
But the 33-year-old Spaniard began finding his form at last month’s Italian Open, beating Djokovic in that final.
In Paris, Nadal is up to his annual standards.
“He’s been playing better and better every week,” said Nadal’s coach, Carlos Moya, the 1998 French Open champion. “He’s been playing well in this moment, which is his main goal: Roland Garros.”
One more victory to go for a dozen titles in Paris.
___
More AP tennis coverage: https://www.apnews.com/apf-Tennis and https://twitter.com/AP_Sports