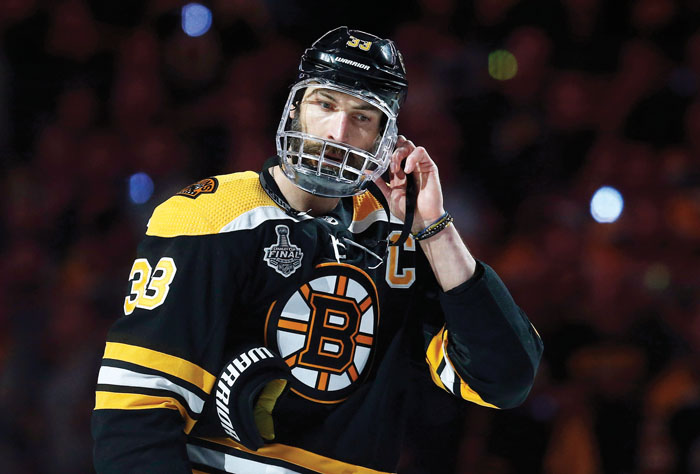 By STEPHEN WHYNO AP Hockey Writer
BOSTON (AP) — Barry Melrose strapped on a fiberglass contraption that made him look like Hannibal Lecter. Rick Tocchet figured he looked more like Darth Vader.
Zdeno Chara resembled Batman villain Bane with his full face shield when he played Thursday night, 48 hours after the Boston captain took a puck square to the face. The same thing happened to Vince Dunn and he has so many wires in his mouth during the Stanley Cup Final that the St. Louis defenseman would probably set off a metal detector.
Playing through a severe injury is something of a hockey tradition, but the jawbreakers’ club is a smaller group. Four decades after Melrose did it, 27 years since Tocchet and 20 years since Jeremy Roenick gritted their teeth through broken jaws in playoff hockey, Chara and Dunn offer a fresh reminder of how much players will sacrifice for a chance to lift the Stanley Cup.
“Pain is temporary and pride is forever,” Roenick said. “They’ll remember you for what you did. The pain is going to go away, and you’re going to forget that you even had that pain.”
Chara is still unable to talk much after taking the puck off the stick of the Blues’ Brayden Schenn on Monday night. Through the Bruins, Chara said he didn’t think about making it worse or consider himself any different from teammates with other injuries. He played 16:42 in Boston’s Game 5 loss that left the Bruins a game from elimination in the final.
Tocchet empathizes with Chara after an errant shot by Pittsburgh Penguins teammate Mario Lemieux in 1992 cracked him in the jaw. He decided to keep playing rather than sit out the projected six weeks.
“I knew the ramifications, but I knew the reward if I could get through this thing,” Tocchet said. “Obviously we won the Cup, so it was a great move by me.”
Had the ’92 Penguins not won? Tocchet simply said: “No regrets.”
Dunn missed almost three weeks after taking a puck to the mouth from San Jose’s Brenden Dillon in the Western Conference final and dealing with concussion symptoms.
After coming back in Game 4 — the same game Chara went down — Dunn feels like he has a mouth guard in at all times and hasn’t been able to eat much solid food. Keeping weight on and digesting enough nutrients is something the jawbreakers’ club knows all about.
Tocchet’s mom came down to Pittsburgh after he broke his jaw and made all his meals in a blender.
“The first two weeks, 10 days, it was hard to chew,” Tocchet said. “You couldn’t really move your jaw.”
Dunn felt like that. Asked recently if Dunn was talking any better, captain Alex Pietrangelo flashed a smile and said: “Yeah. His teeth are coming in.”
Those teeth aren’t all in the right places, so Dunn’s smile was a little broken but beaming after his return. Even if he keeps getting smacked in the mouth.
“I got a stick in the face second shift again,” Dunn said Monday following Game 4. “Nothing is going well for my face right now. It’s whatever right now. It’s an amazing time of the year. Things are going to happen that way.”
Things happen, go play hockey. That was Melrose’s approach back in 1979 when he played for Winnipeg two days after breaking his jaw in three places.
“When I got hit, all my teeth were shoved under my tongue and the doctor had to pull the teeth out,” Melrose said, explaining his four-hour tour in a dentist’s chair. “As long as you can’t hurt it, it can’t hurt you, and you just play with the pain.”
Tocchet missed nine days after the misfire from “Super Mario.” He came back and even fought Kris King and Kevin Hatcher with his jaw in pieces.
“Scotty Bowman wasn’t too happy with me,” Tocchet said. “It’s not that I didn’t care. It’s the heat of the moment. You’re just doing it.”
Roenick sat out three weeks in 1999 after a check from Derian Hatcher gave him three “clean” breaks in his jaw during a playoff game. That was the easy one. Five years later in a regular-season game, a shot from Boris Mironov shattered his jaw in 23 places.
“That is a totally different kind of one to have to come back from,” said Roenick, who’s at the final as an NBC Sports analyst.
The players say one of the toughest parts of playing through a broken jaw is not being able to breathe correctly. Tocchet said it’s more difficult to get back to a regular heart rate and catch your breath after a shift.
“When you’re wired and your teeth are slammed shut, it’s really hard to get air in between your teeth,” Roenick added. “There’s little breathing ways that you can do when you’re slammed shut — breathing like Popeye breathing, breath inside the back of your mouth and not through the front of it. But to get oxygen, it’s really hard. You find yourself sometimes gasping for as much air as you possibly can.”
___
Follow AP Hockey Writer Stephen Whyno on Twitter at https://twitter.com/SWhyno
___
More AP NHL: https://apnews.com/NHL and https://twitter.com/AP_Sports