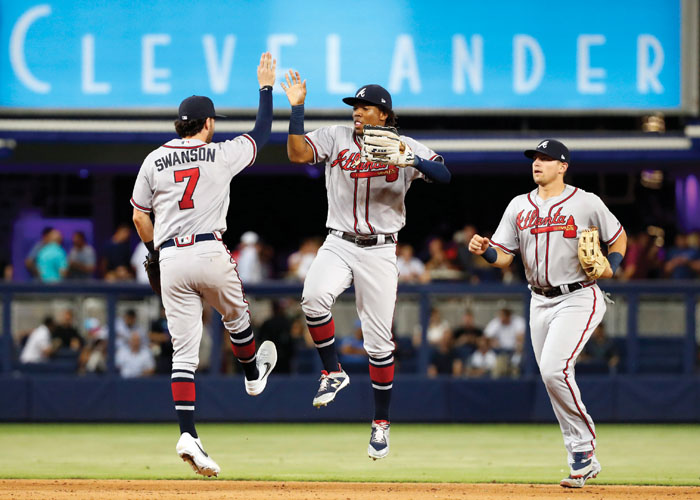 By STEVEN WINE AP Sports Writer
MIAMI (AP) — Mindful of their history with Jose Ureña, Ronald Acuña Jr. and the Atlanta Braves settled the score by running it up.
Acuña celebrated a homer off Ureña with a showy bat flip , and the Braves rocked the Miami Marlins right-hander to win 7-1 Friday night.
Mike Soroka took a three-hit shutout into the ninth for Atlanta and won his seventh consecutive decision.
Ureña was suspended for six games for intentionally hitting Acuña on the arm with a pitch last August, triggering a melee. That likely explains why Acuña showboated a bit when he homered in the fourth inning, carrying his bat most of the way to first base before tossing it high over his right shoulder.
Acuña blew a big gum bubble after rounding second base, then pointed into his dugout and shouted as he approached home plate.
Was the bat blip his best yet?
“I feel like I’ve got a better one lined up,” the Venezuelan said through a translator.
Said Ureña of the flip: “If he feels good with that, good for him.”
Ureña (4-7) gave up 11 hits and six runs in three-plus innings, his shortest outing this year. He fell to 2-8 in 16 career appearances against Atlanta with an ERA of 6.64.
“It’s tough when you face a team that knows what you got and the way you work,” Ureña said.
Acuña’s homer was his 13th. He also had a one-hop RBI single off the fence against Ureña in the second, and a run-scoring single off Wei-Yin Chen in the fifth.
Soroka (7-1) lowered his ERA to 1.38. He retired 10 in a row before allowing a leadoff walk — his second — in the ninth and then departed.
That runner came around to score, but Dan Winkler got the final three outs to complete a five-hitter.
“I’m glad Soroka got the feel of the ninth inning,” manager Brian Snitker said. “That’s good for a young pitcher.”
Freddie Freeman hit his 17th home run and contributed three RBIs, and Ozzie Albies added three hits.
The Braves totaled 14 hits and looked like a team buoyed by a major upgrade, which they are. Free agent pitcher Dallas Keuchel agreed to a one-year contract with the Braves for about $13 million Thursday.
Atlanta didn’t need Keuchel against Miami. Soroka threw 99 pitches and allowed less than four earned runs for the 10th time in as many starts this season.
“Nothing he does surprises me at this point,” said Acuña, who was Soroka’s teammate in the minors. “He’s a tremendous pitcher.”
Starlin Castro led off the second with a double for his 1,500th career hit, but Soroka retired the next three batters. A double play helped the right-hander escape a jam in the fifth.
Soroka helped himself by snaring two sharp comebackers.
BIG ADDITION
Keuchel will likely need a tuneup in the minors but should join the Braves rotation soon.
“Any team that gets a player like that is going to be fortunate,” Snitker said. “He has been through the wars; he has pitched in big games.”
FEELING RIGHT AT HOME
The Braves are 4-0 this year at Marlins Park and 45-23 since it opened in 2012.
TRAINER’S ROOM
Marlins: LHP Caleb Smith (left hip inflammation) went on the 10-day injured list, and RHP Tyler Kinley was recalled from Triple-A New Orleans. The Marlins don’t believe Smith’s injury is serious. Manager Don Mattingly said he’ll consider using an opener to replace Smith on Tuesday against the Cardinals. It’ll be the first time one of the Marlins’ five starters to begin the season has missed a turn.
UP NEXT
Braves: RHP Julio Teheran (3-4, 3.28) is scheduled to pitch Saturday. He’s 7-6 in 21 starts against Miami.
Marlins: RHP Trevor Richards (3-5, 3.53) is 3-0 with a 1.88 ERA over his past four starts. That’s after the Marlins lost his first eight starts this year.
___
Follow Steven Wine on Twitter: http://twitter.com/Steve_Wine
___
More AP MLB: https://apnews.com/MLB and https://twitter.com/AP_Sports