Visit to Normandy a reminder of bravery in wartime 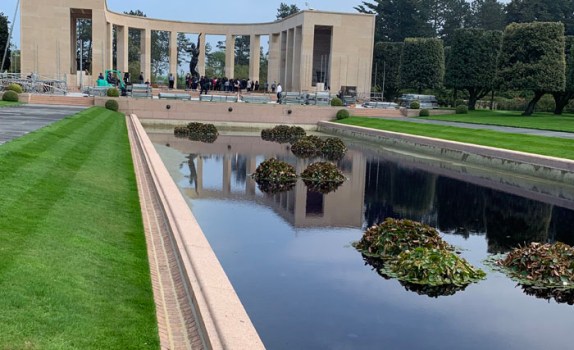 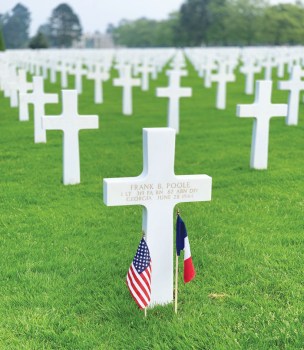 hen families visit graves, sand from Omaha Beach is brushed into the cross in a simple ceremony, making the engraving stand out more. Susan Shinn Turner/For the Salisbury Post 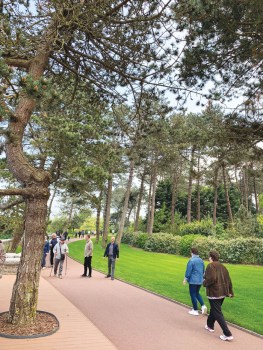 Trees and plants native to North America were brought in to make “the boys feel at home,” according to a guide at the D-Day cemetery in France. Susan Shinn Turner/For the Salisbury Post

NORMANDY, France — Today, the world again came to Normandy, just as it did decades ago. For today is the 75th anniversary of the D-Day invasion, which remains the largest amphibious wartime assault in recorded history.

It is fascinating and horrifying all at once. During a visit, it is indeed difficult to wrap your mind around the events led by Gen. Dwight David Eisenhower, the supreme commander of the Allied Expeditionary Forces in Europe. Eisenhower went on to become our 34th president, the only president until our current commander in chief never to have held elected office before the presidency.

The countryside around Normandy is beautiful, serene and bucolic. Frankly, it’s completely the opposite of the early morning of June 6, 1944, when German troops stationed in observation bunkers near the coast awoke. As the fog lifted, they found the sea full of boats and the skies full of planes.

The invasion of Normandy was planned for months, but the weather was not cooperating. Eisenhower originally wanted the invasion on June 5, but finally, his meteorological team predicted a small window of availability on June 6. Fortuitously, the Germans’ weather information was not as good.

The general still prepared a draft of a speech in case the operation failed. It read in part, “The troops, the air and the Navy did all that bravery and devotion to duty could do. If any blame or fault attaches to the attempt, it is mine alone.”

During a recent trip to Paris, I was looking for a day trip that would interest my husband, my son and me. We found it in Normandy.

Modern Normandy is a study in contrasts. It is a region of France, still fiercely proud of the fact that Vikings once occupied the land. It is mostly agricultural, growing wheat, rapeseed (which yields canola) and apples, which are turned into delicious cider — a local delicacy we got to sample.

The area was utterly destroyed during World War II, and the coastline still bears the scars of bomb, with deep craters surrounding the concrete bunkers at Pointe du Hoc.

Before we toured the infamous Omaha Beach, we visited Longues-sur-Mer, where four huge cannons, long since silent, still stand sentinel a ways inland. It was important for the Allies to take those cannons down, and all four cannons were disabled with swift surrender by the Germans on June 7.

In all, there were 22 German batteries along the Normandy coast, which were among some 15,000 in what was called the seemingly impenetrable Atlantic Wall. The Germans knew that the Allied forces — Americans, British, Canadians and French — were going to attack soon. They just didn’t know exactly where and they didn’t know exactly when.

In all, these beaches — with cliffs like the West Coast of California that have a steep drop to the shoreline — encompass about a 30-mile area.

The walk up to the top of Omaha Beach is not terribly difficult although it is an uphill climb. Today, it’s literally a day at the beach and quite impossible to imagine the struggle the soldiers faced. Our guide told us that there was little progress being made early on, but then a soldier who just happened to be a hunter noticed a rabbit path and followed it. This may be just the stuff of legend, but a breach was made somehow, and the beach was secured by 6 p.m.

What is fact is that the beach is known as Bloody Omaha because of the 3,000 casualties sustained that day. There were 600 at Utah, 500 at Gold and Sword, and 400 at Juno.

And then there was Pointe du Hoc, often called the sixth landing site. At the top of this area between Omaha and Utah beaches is a monument to the Big Red One. The men of the 2nd Ranger Battalion fought for two days without reinforcements trying to take down the big artillery guns, which they realized too late were moved inland. There were 90 survivors out of the original group of 225.

Lastly, we visited the American Cemetery at Colleville-sur-Mer. The 172-acre cemetery was dedicated in 1956. The American Battle Monuments Commission is the U.S. government agency that operates this cemetery, and 25 others, in 16 countries. According to its brochure, “The government of France granted use of this land, in perpetuity, as a permanent burial ground without charge or taxation.”

A $30 million visitors center opened in 2007, but it was closed for renovations when we visited. It reopened June 1 in time for the D-Day anniversary.

Even without being able to check into the visitors center, there was a lot to see. The cemetery is maintained in a gorgeous, park-like setting. Frequent rains keep the lawns lush.

Our guide told us that trees and plants native to North America were brought in “to make the boys feel at home.” I don’t know if that’s true either, but it is indeed a sweet sentiment.

Of the 9,387 graves here, 149 are marked by Stars of David. Three Medal of Honor recipients are buried here, including Brig. Gen. Theodore Roosevelt Jr., who is buried next to his brother, a pilot in World War I. There are 43 pairs of brothers here, including two of the four Niland brothers whose story was the basis for the movie “Saving Private Ryan.” They, too, are buried side by side.

Visitors cannot walk the rows of markers unless they are family members, and there’s a small but meaningful ceremony when this happens. Cemetery staff members ferry the family members by golf cart to the gravesite then carefully brush sand from Omaha Beach onto the marker, making the engraved information stand out even more against the white background.

To learn more about the American Cemetery at Normandy, visit http://ambc.gov and search for Normandy.