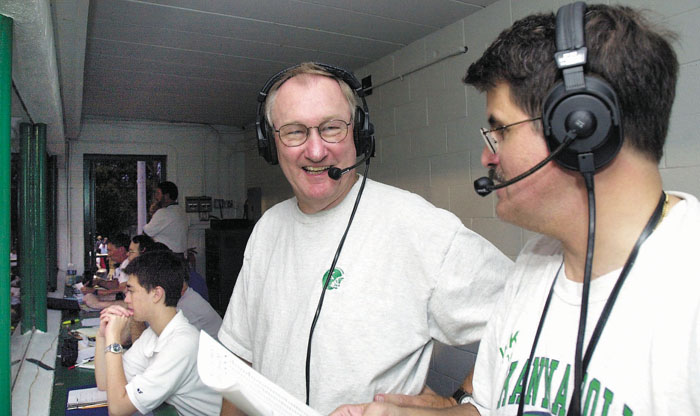 Jon C. Lakey file photo/Salisbury Post ... In a file photo from 2003, former A.L. Brown head football coach Bob Boswell, left, works as a color analyst for a Wonders game, along with play-by-play man Frank Santore. Boswell, who coached the team in 1976-88, died this week at the age of 82.

KANNAPOLIS —  The foundation for A.L. Brown’s tremendous football success was laid in 1976 when N.C. State assistant Bob Boswell was hired to be the head football coach and athletics director.

It was learned on Wednesday that Boswell, 82, has died of cancer.

There was a time when A.L. Brown ran through frequent head-coaching changes like many other high schools. Boswell brought stability, he brought serious weight training that was well ahead of its time — and he brought a lot of winning.

He learned how to win early. A graduate of Walter Williams High in Burlington where he was an end on the football team, he graduated from Elon with a social studies degree. He was a good baseball player and was a pitcher/infielder at Elon. He earned a masters degree in education at UNC.

His first football coaching job was at Graham in 1960. He was an assistant there from 1960-65. The 1965 Graham team won a 3A state championship. Elevated to head coach in 1966, his Graham squad was state runner-up.

When T. W. Andrews High School opened in High Point in 1968, Boswell was hired as head football coach and AD. His first team went 6-4. His 1972 team was 4A state champion, while his 1973 team lost only one game.

That success was a springboard into college coaching and he assisted coach Lou Holtz at N.C. State during a highly successful era for the Wolfpack. The 1974 team was a top-1o team nationally. The 1973, 1974 and 1975 teams played in bowl games.

Boswell was still at N.C. State in 1976  (Holt had been hired by the New York Jets in February 1976)  when he heard N.C. State assistants talking about a job opening at A.L. Brown. He was familiar with A.L. Brown, as it had been part of his recruiting territory with the Wolfpack. Boswell knew Kannapolis superintendent Grier Bradshaw well because Bradshaw had been one of his principals at T.W. Andrews. That connection led to Boswell interviewing for the job. He was hired to lead a football team and to rebuild an athletic program.

When Boswell was hired, A.L. Brown football had fielded some solid teams but had not won a championship since 1960.

Boswell’s first A.L. Brown team was 2-8 and didn’t score a point until Week 5, an 18-7 loss to Albemarle. The next week, the Wonders won for the first time under Boswell, 7-6, against Asheboro.

Boswell built his teams around defense and the running game.  By 1979, the Wonders were champions of the 4A Central Piedmont Conference. They were 11-0 when they lost to East Burke in the state playoffs.

The 1980 team, with future NFL players Ethan Horton and Lance Smith, may have been the scariest in school history, beating Concord 41-0 and shutting out six opponents, but that team lost once — to Greensboro Page, 21-19, in the 4A playoffs.

Boswell run of powerhouse seasons continued. The 1984 Wonders went 13-1. The lone loss was to Tarboro in the 3A state championship game.

His last A.L. Brown team in 1988 went 8-2 and was co-champion of the CPC, although the Wonders didn’t get to participate in the state playoffs. He was 102-37-1 at the helm of the Wonders.

He was the head coach for the West team in the 1979 East-West All-Star Game and North Carolina’s head coach in the 1988 Shrine Bowl.

Boswell left Kannapolis to coach in South Carolina after that Shrine Bowl. His successor at A.L. Brown, Bruce Hardin, arrived at a program that was returning to the 3A ranks and was ready to win big, and Hardin led the Wonders to the 1989 3A state championship. Hardin would guide another 3A state champion in 1997.

After a decade in South Carolina and retired from teaching, Boswell resurfaced at South Rowan to help out head coach Rick Vanhoy and the Raiders’ defense. In 2000, with Boswell as a linebackers coach, South had one of its best defenses and one of its toughest teams (8-3) in modern times. South’s 2001 team created an amazing 48 turnovers and went 8-5.

All that consistent success dates back to Boswell. He was the cornerstone of one of the state’s most respected programs.