New England: Champs are back at work 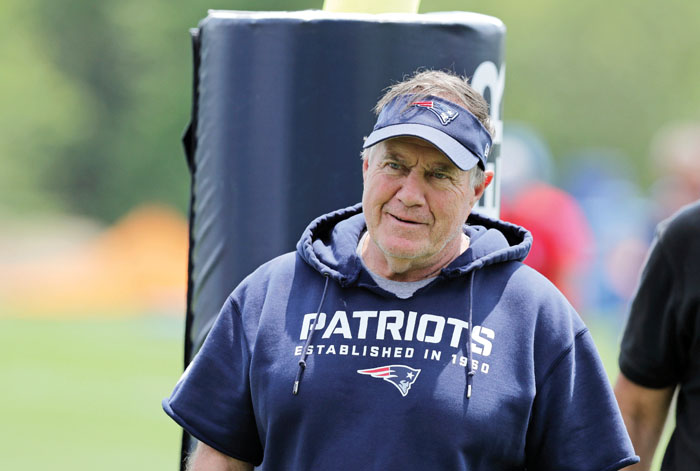 FOXBOROUGH, Mass. (AP) — Jarrett Stidham doesn’t have time to listen to the talk about him being a possible successor for a Hall of Fame-bound quarterback.

For the Patriots’ rookie, every day of the team’s offseason program is simply another opportunity for self-improvement.

“Every single day I wake up and I say, I’ve got to get better at something today,” said Stidham, the Patriots’ fourth-round draft pick, after Wednesday’s mandatory minicamp practice.

“And as I go throughout my day, I try to take in everything as it comes and try to retain as much information as possible, and continue to get better.”

The former Auburn QB was the 133rd selection in the April draft, and could be the eventual replacement for six-time Super Bowl champion Tom Brady, who will be 42 in August yet is showing no obvious signs of decline.

Brady stayed away from voluntary workouts, but is present at the mandatory minicamp at Gillette Stadium, giving Stidham his first opportunity to work with him.

“Obviously he’s a great player, a great person, and honestly, it’s just been great just to see him operate,” Stidham said. “He’s been doing it for so long, and obviously he has a lot of knowledge, so I’m just trying to sit back and watch how he works, and soak in as much as possible.”

For the second straight day, Stidham took all the snaps with the third-string offensive unit, which may already put him ahead of second-year veteran Danny Etling on the Patriots’ depth chart. But the journey has just started, with another organized team activity period to follow this minicamp, and training camp next in late July.

“I’m just trying to get better,” Stidham said. “Every little facet of my game, whether it’s learning the offense, cleaning up mechanics, whatever it is, I’m just trying to improve each day and not take a step back.”

Stidham’s football journey began as a youngster growing up in Richmond, Kentucky. One of his teammates from that peewee team is also an incoming rookie with the Patriots this year, running back Damien Harris of Alabama, a third-round draft pick.

“Life comes full-circle,” said Stidham, who moved to Stephenville, Texas, as a teenager but maintained his friendship with Harris over the years. “Damien and I were lucky enough to both get drafted by the Patriots and now we’re both here, hanging out on the weekends like old times, like we were 8 years old.”

Enjoyable as it may be for Stidham to remember simpler times, his life is now one adjustment after another as he adapts to the demands of joining of one of the NFL’s most successful franchises.

“I think you can tell the difference as soon as you get here for rookie minicamp,” Stidham said. “But now that I’ve been here for almost a month now, you really start to see the differences. You’ve got to take it and run with it, and there’s no shortcut to figuring it out. You’ve just got to continue to get after it each day.

“Just being in the day-to-day operations of the Patriots and that sort of thing, the culture as a whole, you don’t really know what it’s like until you’re there,” he said. “Obviously, it’s a great organization and a lot of fun to be a part of.”

FLORHAM PARK, N.J. (AP) — Sam Darnold recently made a mistake that drew the ire of Adam Gase. It was the first time the New York Jets coach raised his voice at his young quarterback.

Darnold didn’t flinch. At all.

“He was like, ‘It’s about time you started getting on me a little bit,’” Gase recalled with a smile.

Darnold turned 22 years old Wednesday — a baby by NFL standards — but Gase doesn’t feel any need to treat him with kid gloves.

“You can say whatever you want to him,” Gase said with a smile. “He’s great about that. I think he likes it better when you’re a little aggressive with him.”

Add that to the ever-growing list of things Gase already appreciates about Darnold as the QB guru and the franchise QB develop a working relationship they both hope will grow stronger for many years.

Darnold is still learning the nuances of Gase’s playbook after being in Jeremy Bates’ system last year. Gase uses a walkie-talkie to call plays into Darnold’s headset during practice, trying to help the quarterback get used to his voice and feel comfortable with it long before the season starts.

The two also constantly speak in person and away from the practice field, breaking down plays and finding out what works best for them. Not that Darnold has asked Gase to adjust any elements of the playbook just yet.

“No, nothing drastic like that,” Darnold said. “I think, for us, it’s more conversations like, ‘Oh, that felt a little awkward,’ or, ‘I don’t know how I feel about that.’ I’m never going up to him like, ‘Hey, that’s not part of the offense. We can’t do that.’ I’m not there yet. But, it’s definitely conversations that we have where it’s like, ‘OK, maybe I don’t do that so well.’

“But again, there’s room to grow. There’s always room to grow for me. I feel like I have so much room where I can get better.”

That was reiterated to Darnold during the first minicamp practice Tuesday when he was intercepted twice during team drills. New defensive coordinator Gregg Williams was typically aggressive with his squad, frustrating Darnold at times.

That, Gase insisted, will only help Darnold and the rest of the offense.

“It’s a good process for us,” Gase said. “It’s tough going against Gregg’s defense where you get multiple looks. We threw in some new stuff on the offense and there’s some growing pains there. But that’s part of the process, it’s good stuff for us to have to go through.”

Gase is excited about having a quarterback at this stage of his career with Darnold’s physical abilities and mental capacity. The coach, who has worked with the likes of Peyton Manning, Jay Cutler and Ryan Tannehill, has raved about Darnold’s maturity and businesslike approach on the field and in the classroom.

A year ago, Darnold was a rookie simply trying to figure out life in the NFL. Darnold’s teammates have noticed a difference in the quarterback this spring.

“Confidence, honestly,” left tackle Kelvin Beachum said. “It’s been great to just see him being able to command the huddle and understanding the urgency that goes along with each particular drill. … I’m excited to see what he has once the (season) gets going.”

The Browns superstar wide receiver spoke Wednesday for the first time since his introductory news conference in April and said he’s never felt so good about his life or career.

Cleveland acquired Beckham in a blockbuster trade in March from the New York Giants, who tolerated the 26-year-old’s sometimes selfish behavior for five seasons before deciding to part ways.

Beckham said he’s “beyond excited” by the new start and feels refreshed. He’s “giddy” about the Browns’ potential, especially with a high-powered offense featuring him, quarterback Baker Mayfield and close friend Jarvis Landry.

Beckham has never been a champion at any level, but feels “something in the air” in Cleveland, where expectations for the upcoming season grow by the day.

The three-time Pro Bowler skipped the majority of the Browns’ offseason workout program, practicing just once and while opting to train in California.

MANNING SEEMINGLY TALKING ABOUT DANIEL JONES AS MUCH AS SELF

EAST RUTHERFORD, N.J. (AP) — Two-time Super Bowl MVP Eli Manning is answering as many questions about his own game as he is about the future of Daniel Jones, his heir apparent as Giants quarterback.

Jones, the sixth pick in the NFL draft in April, is going to replace the 38-year-old Manning at some point.

If you listen to Giants general manager Dave Gettleman, he favors the Kansas City Chiefs’ model. They drafted Patrick Mahomes in 2017 and he sat behind Alex Smith for a year before taking over this past season and winning both the NFL MVP and Offensive Player of the Year awards.

That would give Manning a 16th season as the Giants’ quarterback and a chance to get New York back to the playoffs for only the second time since 2011.

Jones, however, has looked good in preseason workouts. Granted no one’s either wearing pads or threatening to hit him, but his passes have been on target and he offered the added dimension of being able to run, something Manning has rarely done.

So the timetable is uncertain, and Manning gets peppered with questions about Jones. He politely answers them and makes it clear the presence of the Duke quarterback has not changed his approach to the game.

His competition isn’t Jones. It’s trying to be his best.

“I think you are driven because it’s football and you have a job to do and you want to win games,” Manning said. “That’s what drives you, going out there and winning. You work hard to do that and you deserve to win games and for the team to win games. That’s what driving you to work hard in the offseason and compete every day in practice.”

Manning said Jones has done a good job, is throwing the ball well and is learning the offense.

“It’s a lot thrown at you, especially going against NFL defenses,” Manning said. “A lot more looks, a lot more blitzes, a lot more protection adjustments and different things. You are going to make every mistake there is; I think at that stage it’s just trying not to repeat the same mistakes.”

For now, Manning is working on fundamentals and trying to get to know some of the new guys such as receiver Golden Tate. He said he is feeling good and he likes what he has seen from the team coming off a 5-11 season.

Manning had his moments in the mandatory minicamp practice Wednesday, connecting with Rhett Ellison, Bennie Fowler and Tate in the red-zone drills.

Jones has been impressive, particularly with his ability to move and extend plays.

Offensive coordinator Mike Shula said Jones would be the No. 1 selection in most pick-up games. Coach Pat Shurmur adds he has seen him improve in every practice.

“He displays, to me, that he gets it,” Shurmur said. “He is becoming more and more comfortable with what we are doing offensively. He is putting his skills to the test, and making plays in every practice.”