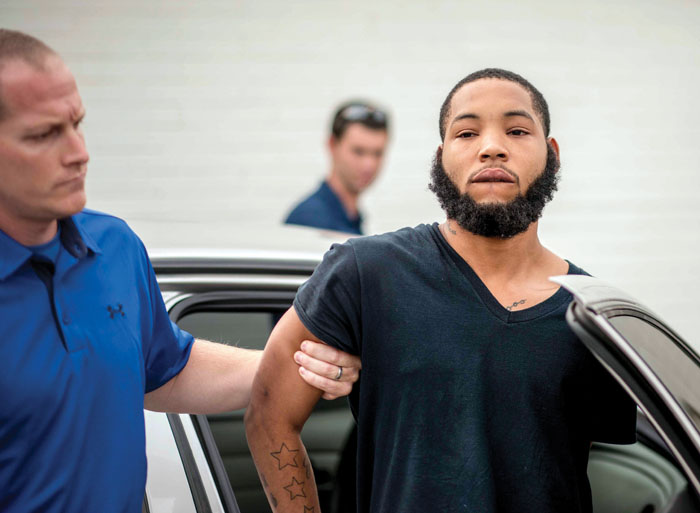 JON C. LAKEY / SALISBURY POST FILE PHOTO - Jalen Cook is taken to the magistrate's office late on Aug. 1, 2017. He was charged with two counts of murder, stemming from a shooting on West Fisher Street.

SALISBURY — A Salisbury man will likely spend about four years in prison after receiving credit for time served in the 2017 shooting deaths of Da’Quan Robertson, 23, and Anthony Gill, 22.

Both men were shot outside Go Burrito about 2 a.m. July 29, 2017, after a fight in the former Wells Fargo parking lot that police said involved more than 20 people and caught up patrons leaving the downtown restaurant.

Family members of both Robertson and Gill said they didn’t feel as though justice had been served.

On Wednesday, Jalen Lamont Cook accepted an Alford plea and was sentenced to six years to 8.25 years in prison. He was arrested in August 2017 and has been in the Rowan County Detention Center since then awaiting trial. He was initially charged with two counts of murder and assault with a deadly weapon.

As part of the plea, Cook was sentenced on two counts of voluntary manslaughter and assault with a deadly weapon inflicting serious injury as well as a number of offenses for an unrelated 2014 matter.

Assistant District Attorney Tim Gould said the shooting began after Raven Cook, the sister of Jalen Cook, had a fight with Shaquille Roberson, the father of her child, sometime before that day. The prosecutor said Cook and his brother, Kornell Cook, and two other men armed themselves and went where they believed Shaquille Roberson to be in the downtown area.

Da’Quan Robertson, Gill, and about 10 to 15 others had been at Go Burrito.

According to the prosecutor, Jalen Cook confronted Shaquille Roberson. The two agreed to put down their guns and fight with fists. But at some point, Zakelo Duren fired a “warning shot” in the air. Chaos ensued as multiple people began firing into the crowd. Duren was charged with inciting to riot.

About 60 gun-shell casings were found between the former Wells Fargo, the Salisbury Post office, Go Burrito and First United Methodist Church parking lots as well as into cars parked nearby and the Go Burrito building. Da’Quan Robertson was found shot in the back in front of the church with a gun clutched in his hand.

A friend drove Gill to the hospital, where he later died. Gill had also been shot in the back. Kayla McCullers, the girlfriend of Jalen Cook, was shot but recovered, as was Quandarious Davis.

Jalen Cook had an AK-47 and a handgun. He, too, was shot and went to the hospital, where he said he’d been shot during an incident in Lexington.

Assistant District Attorney Gould said Cook fired at least 15 rounds from the high-powered rifle. A video recording from a house in the area captured sound from the shooting and corroborated the number of shots that were fired.

Gould told Superior Court Judge Lori Hamilton that one reason prosecutors were not able to proceed with a trial is that a witness, Quandarious Davis, who was also shot, was not cooperative. In addition, Gould said, it was unclear who fired the first gunshots. Gould said prosecutors knew Jalen Cook fired the rifle, which witnesses, including girlfriend Kayla McCullers, said he had.

At the time of the shooting, Jalen Cook was on pretrial release for a 2014 Rockwell home invasion. He was charged with assault with a deadly weapon with intent to kill, cruelty to animals, first-degree burglary and robbery with a dangerous weapon.

Jalen Cook and two others allegedly broke into the home, ransacked the house, shot the owners dog and reportedly later bragged about the crime.

Gill’s cousin, Bianca Koontz, said Wednesday everyone involved in the shooting should have been arrested. Koontz reiterated sentiments she expressed in court that neither family received true justice.

Koontz said she could not forgive Jalen Cook.

“We will all be meeting in hell together,” she said.

Another cousin, Mahagony Koontz, said she loved Gill like a brother. He encouraged her to enroll in the early college program but now will never see her graduate.

She said Jalen Cook received a “slap on the wrist for two murders.”

Koontz said Cook wasn’t “protecting his sister.” Instead, he was being a “blood-thirsty killer.”

Ashley Simpson, who married into the Gill family, said both men were loved by many.

“I think it was an unfortunate, tragic situation that took place two years ago. We’re happy to resolve the situation, and we’re happy that this situation is behind Mr. Cook at this point in time. Our condolences go out to the family of the deceased, and we pray that they find peace at some point in time,” said Cook’s attorney, James Cyrus.

Robertson’s mother, Crischelle Patterson, brought a picture of her son and showed it to the judge. She said she lost her son because of a bad choice that could’ve been avoided.

“I hate this night had to happen. They all grew up together,” Patterson said.

She added that she didn’t think justice was completely served.

Zakelo Duren was convicted in August 2018 and spent three months in prison. In August 2017, Kornell Cook was shot outside the Brenner Crossing Apartments complex. Three teenagers were charged in his murder.