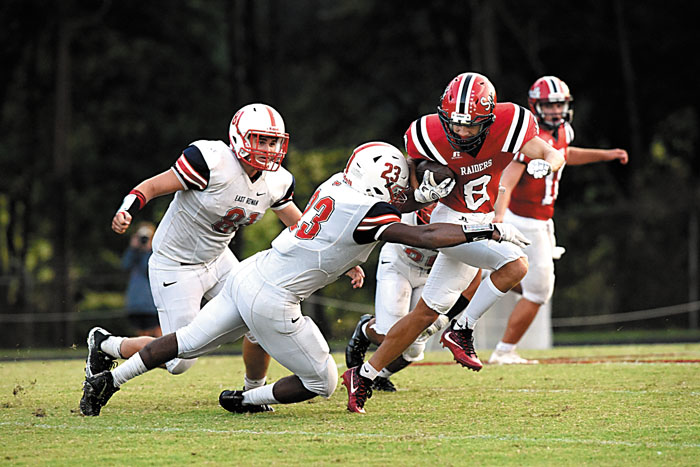 Wayne Hinshaw file photo/for the Salisbury Post ... East Rowan linebacker Christian Bennett (23) tackles South Rowan’s Kory Sellers (8), during a high school football game in 2017. Bennett, who played both ways for the Mustangs, is expected to stick with defense in college — at Catawba.

GRANITE QUARRY — The first thing you can say about East Rowan’s Christian Bennett is that he passes the eye test.

With a lot of high school seniors, college coaches have to imagine what they’ll look like after they fill out, after they mature, after they’ve hit the weight room for a couple of years.

But Bennett, who signed with Catawba College, looks like someone who can step onto the football field for the Indians this fall. He’s not mean — at least not off the field — but he’s tough. He’s rugged. He’s strong. He’s fearless. He’s physically imposing at 6 feet and 220 pounds.

He’ll have adjustments to make as far as playing linebacker against more sophisticated offenses. He’ll have to learn the ropes of a college game that’s played at a quicker pace and by larger people than high school. But physically, he’s a man. He’s not going to be overwhelmed.

“When our players first saw him they couldn’t believe he was a high school guy,” Catawba head coach Curtis Walker said. “He looks like they do. Right now, he wouldn’t be out of place in our locker room. We do think he can play early for us and we’re excited about him having a chance to play early.”

While Bennett was best known for what he did on football fields, his athletic ability was on full display every track and field season.

Besides being the Rowan County, North Piedmont Conference and 3A Midwest Regional champion in the discus and NPC champion in the shot put, he always ran a leg on East’s fast 4×100 relay team. He was a 220-pound bull sprinting stride-for-stride with 140-pound rabbits.

Not many high school athletes possess Bennett’s level of versatility. Not many are that muscular and that explosive, but Bennett is a dynamic individual. He’s a 4.7/4.8 guy in the 40, and he can cover a lot of territory on a football field.

During basketball season, everyone gets to see another side of Bennett. He’s far from a star in that sport, but he’s always accepted his job as a defensive-minded rebounder. To see him embrace a supporting role in hoops has been gratifying to watch. That sort of ego-less effort has become increasingly rare.

It seems like he’s been around a very long time. That’s because he was a starting linebacker for East’s varsity as a freshman. He was supposed to play on the jayvees, but an injury created an opening, and Bennett filled it and filled it well. That was in the fall of 2015. On East’s opening night, he made eight tackles against Salisbury.

On a crazy night in October, 2105, Hurricane Joaquin dumped sheets of water on the Mustangs at Hickory Ridge, but Bennett, the kid, shined in the midst of that cold, wet chaos. “Tackle by Christian Bennett” boomed over the P.A. system every few minutes. He’s been one of the county’s football standouts ever since that night.

By his sophomore season, his teammates looked up to him as if he were a senior. He accepted that challenge. He made the defensive calls. He raised the bar for everyone. He pushed his teammates.

Dependable as a freshman, he became special for the Mustangs that sophomore season. He became a playmaker, forcing two fumbles against Concord and two against Hickory Ridge. He was credited with a safety against South Rowan. Against Salisbury, he had an interception and returned a fumble for a touchdown.

By the end of his sophomore season, he had become a perennial pick for the All-Rowan County team. He also made All-South Piedmont Conference in 2016, and that was a tough team to make in a league stacked with stout Cabarrus teams.

“I think the biggest thing that separates him is he really wants to be good,” East head coach John Fitz said after that 2016 season. “A lot of people tell you that they want to be good, but he makes the extra effort that it takes. He’s a leader-type kid.”

Over the last two seasons, with East moving to the North Piedmont Conference, Bennett continued to progress. Always a sure-tackling rock, his footwork improved and he became more vocal.

“I definitely think he became a better player as he got older and gained more experience.” Fitz said.”He’s obviously very gifted physically and just made himself better each year.”

As a senior, even with East turning in a modest 6-6 season, Bennett was the Post’s Rowan County Defensive Player of the Year. He made 97  tackles, 19 for loss. He had four sacks and three interceptions. He had a pick-six.

He did all that on defense despite double duty as a two-way player. East needed him on offense as well. As a running back, he surpassed 500 rushing yards and scored 10 touchdowns.

“I always try to be an all-round athlete, no matter what the team needs,” Bennett said. “I’ve been fortunate to get a few accolades.”

Despite his football credentials and despite grades that a bookworm would be proud of, Bennett wasn’t heavily recruited.

When Catawba held a workout/visit for uncommitted potential recruits, Bennett took part and pleasantly surprised Catawba’s coaching staff. They knew he was physical, but he was more mobile and agile than they expected.

“He ran well and he jumped well,” Walker said. “We’ve seen him do really good things on film and we knew he would hit people with tenacity, but he also showed us he could cover well. He’s a young man with no academic problems, and as a staff, we got very interested in recruiting him. We put him on our board as a priority guy.”

Bennett said Catawba tight ends coach Tim Pangburn, an All-State offensive lineman during West Rowan’s run of championships, stayed in steady contact with him, as Bennett made a decision that mostly boiled down to Catawba or Barton, where former Catawba coach Chip Hester was putting together his new school’s first recruiting class.

“I talked to Coach Pangburn a lot by text and Twitter,” Bennett said. “I’m glad things worked out. I’m humbled by the opportunity.”

He came late to the party, but he may turn out to be one of the gems in this class.

“We think we got a steal, a guy who can help early,” Walker said. “And it’s going to good for Christian, as well. His family, his relatives, his friends, everyone is going to have a chance to watch him play.”