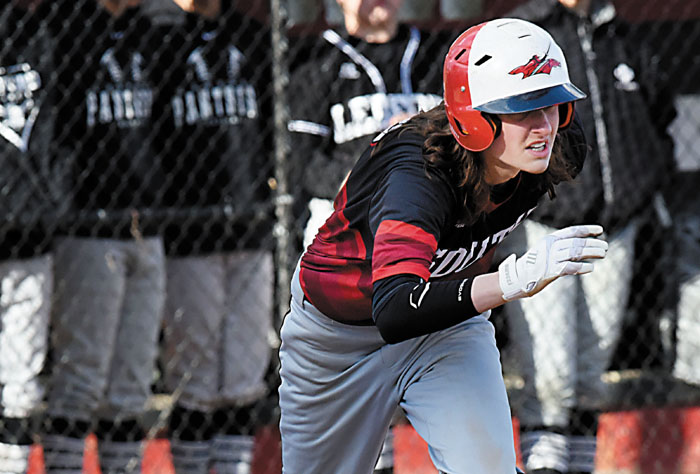 Wayne Hinshaw file photo/for the Salisbury Post ... South Rowan’s Bryson Bebber runs to first base during a 2018 game against Ledford. Bebber recently announced that he will continue his education and baseball career at Surry Community College.

LANDIS—  The inspiration for Bryson Bebber’s baseball career was his late grandfather, Sammy “Pops” Bebber, who was there for every ballgame Bryson played.

It didn’t matter if it was his first T-Ball game at age 4 or his high school games at South Rowan.

“He was there for practices, for workouts, for every single game, for anything I ever did that was related to baseball,” Bebber said. “He was the most influential person I’ve ever had in my life. He was the one who always told me I’d play college baseball.”

Sammy Bebber passed away at 80 in December of 2017, but he was right about his grandson’s future.

Bryson signed recently with the Surry Community College Knights. His education and baseball career will continue about 75 miles north of South’s baseball field in the small town of Dobson. Surry is known for mountains, wine vineyards — and baseball.

The Knights have been a strong two-year program for years and have benefited from a number of players from the South Rowan/Kannapolis area. South’s Hunter Travis starred as a shortstop for the Knights in 2017-18. A.L. Brown’s Jacob Tuttle won Region X Pitcher of the Year honors for the Knights (24-18) this season.

The 6-foot-2 Bebber is a good athlete. He played some varsity basketball for the Raiders.

He played football in middle school, but he didn’t try the sport again until his senior season in high school. He went out because a lot of his pals, including his best friend Andrew Jones, were on the football team. Bebber wound up starting as a defensive back and led the Raiders with four interceptions, including two in a win against West Davidson. Against Lexington, he recovered a fumble in the end zone for a touchdown.

“Football was more fun than I ever thought it could be,” Bebber said. “Now, I wish I had played every year.”

But baseball is where his heart is, and where it always will be.

“I really wanted to continue playing baseball in college and didn’t care where it was or how far away it was,” Bebber said. “It was getting pretty late in the school year and I hadn’t signed, so I started reaching out to a lot of schools. Surry responded. They offered me a tryout, and that tryout went really well.”

Bebber played a lot of different positions for South as a junior.

As a senior, with a lot of young talent added to the roster, Bebber was able to focus on being the regular first baseman.

He’d worked with Adrian Gantt, Jeff Link and Joel Burgess at Extreme Performance in the off-season. That helped him have a good senior year.

“He did a solid job defensively for us, he got on base a lot, and he’s got a good swing,” South coach Thad Chrismon said. “Potentially, he’ll be a really good player for Surry.”

One of the senior highlights for Bebber was a base hit that gave South a 10-run rule win at home against Uwharrie Charter in April. Uwharrie Charter went on to win the 1A state championship.

In his final high school game against powerhouse North Davidson, he was South’s cleanup hitter and had a base hit.

“I liked first base, but my most important job was trying  to be a good leader,” Bebber said. “We had a lot of young guys and not a lot of seniors, but we still had a good season.”

South went 14-11 and made the 2A state playoffs. Five losses were to North Davidson and Ledford, two of the top six teams in 2A in the final MaxPreps rankings, so it was a better year than most people realized.

Bebber is spending this summer playing first base for the Kannapolis American Legion team and has done well. He’s played in seven of Kannapolis’ first nine games and is batting .400 (8-for-20) with four RBIs. He homered in a recent game against Concord. Concord standout Maven Parker will be one of Bebber’s Surry teammates.

But Legion summers end. Fall will be here before you know it, and Bebber, who hopes to become an engineer or a teacher/coach, will head to Surry to start the next chapter in his life.

“I’m excited about the opportunity to play college baseball,” he said. “I just wish my grandfather could be here to celebrate with me.”