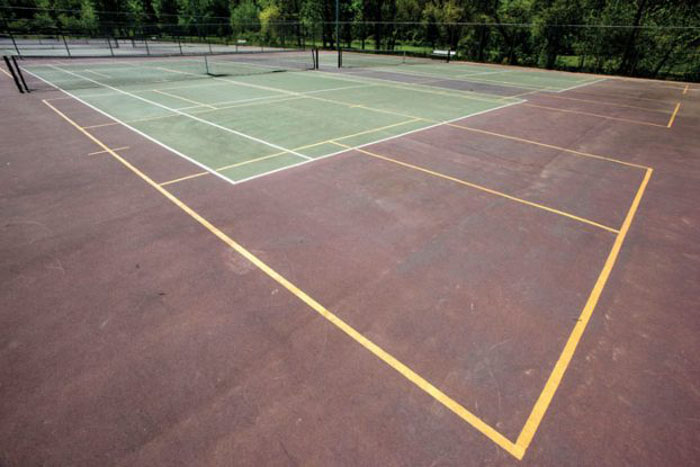 Tuesday’s vote comes after the City Council approved a consent agenda item at its Jan. 2 meeting for a donation of $25,000 to the Parks and Recreation for pickleball courts. The donation was approved unanimously in August by the Parks and Rec Advisory Board.

But conversion of the tennis court to pickleball gained prominence after dozens of tennis and pickleball players spoke during public-comment periods in recent City Council meetings, including at Tuesday’s.

Tennis players offered concerns about the lack of resurfacing of the City Park tennis courts,  which led to deterioration, that there were private donors and confusion caused by temporary pickleball court lines on tennis courts.

Pickleball players said the sport is becoming more popular and, therefore, the need for a dedicated place to play pickleball is growing.

Nick Aceves, the parks and recreation director, presented to the council the process that the department has gone through.

“Parks and Rec is no longer just basketball and football,” Aceves said. “It is now trendy. Pickleball is a trend and it is increasing every year.”

He said as Parks and Recreation is going through the Master Plan process. Pickleball was one of the most popular items mentioned when it was asked what citizens wanted to see brought to Salisbury.

Aceves said he did not want the lack of resurfacing of City Park tennis courts to seem like Salisbury was forgetting about tennis, but the department is trying to maximize their facilities and dollar as much as possible.

Councilman Brian Miller said Parks and Recreation been significantly impacted by a reduction of resources and is trying to keep up. Miller added that he has seen the passion of both tennis players and pickleball players and also the growth of the pickleball in Salisbury.

“This has proven to me is we need to have some way of solving this that allows us to create a need for both sports and for the growth of this sport in a way that make sense,” Miller said.

Aceves said they ask pickleball players to supply their own equipment, which is uncommon.

Miller asked Bailey to look at the impact of providing money to have resurfacing of the tennis courts and the pickleball facility as the City Council goes into the budget session.

Mayor Al Heggins agreed that the city should explore that option as well.

The resurfacing of the tennis courts is about $60,000. A pickleball facility at Civic Center would be about $100,000 without lighting.

Mayor Pro Tem David Post was one of the donors and said he does not apologize for his donation for the pickle ball court.

Miller and Councilwoman Karen Alexander both commended Post for investing in the community.

Alexander said those should look at Post as an example of giving to the community.

Post commented how pickleball has become a part of the community. He started to play after being introduced to the sport at Citizens Academy. He had played tennis for many years but had to give it up after needing a hip replacement. Post said pickleball is popular with people his age and it is an inviting sport.

Bailey said he would look at the budget to present a proposal at the June 11 budget workshop.