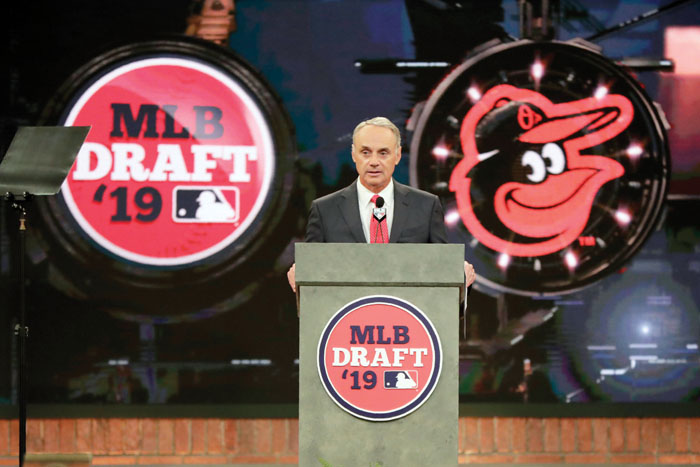 Major League Baseball Commissioner Rob Manfred announces Adley Rutschman, a catcher from Oregon State University, as the No. 1 selection by the Baltimore Orioles in the first round of the Major League Baseball draft, Monday, June 3, 2019, in Secaucus, N.J. (AP Photo/Julio Cortez)

Toronto selected Florida high school pitcher Braden Halladay , a son of the late Roy Halladay, in the 32nd round of the Major League Baseball draft Wednesday — the round matching his father’s Blue Jays uniform number.

The younger Halladay is a right-hander like his famous father, who will be posthumously inducted into the Hall of Fame next month.

Braden Halladay tweeted a thank you to the Blue Jays, saying “it’s a great honor!” He added in his post that there was a mutual understanding between him and the team that he will be honoring his commitment to attend Penn State.

“It was really a group thing, something we had talked about doing to really just signal to them and acknowledge them as part of the Blue Jay family and specifically Braden,” said Steve Sanders, Toronto’s director of amateur scouting. “We’re certainly excited to watch him go play in college and hopefully be in the same situation a few years from now.”

Roy Halladay won 203 games and two Cy Young Awards over 16 big league seasons with the Blue Jays from 1998-2009 and Philadelphia Phillies from 2010-13. He died in November 2017 at age 40 when the private plane he was piloting crashed into the Gulf of Mexico off the coast of Florida.

The younger Halladay went 3-1 with a 4.06 ERA and 37 strikeouts with 17 walks in 31 innings over 11 games as a senior at Calvary Christian High School.

“He’s got a good delivery,” Sanders said of the 6-foot-3, 150-pound Halladay. “We saw him pitch last year down in Dunedin against the Jays (with the Canadian junior team). He competes really well and as he grows into his frame and grows into his stuff, he’s certainly set up to have a lot of success at Penn State.”

There were plenty of other players with famous bloodlines to hear their names called as the three-day draft concluded with rounds 11 through 40.

The younger Leiter was considered a possible early round prospect, but made it clear he had a strong commitment to attend Vanderbilt. He’ll be eligible again for the draft in two years because he’ll be 21.

The Diamondbacks took Arizona high school righty Luke Bell in the 34th round, and he could be on his way to giving his family four generations of big leaguers. Luke is the son of former major league third baseman Mike Bell, who’s currently the Diamondbacks’ vice president of player development. Luke’s uncle is David Bell, his grandfather Buddy Bell and great-grandfather Gus Bell.

The Astros selected Lamar shortstop J.C. Correa in the 38th round. He’s the brother of current Houston shortstop Carlos Correa, the No. 1 overall pick in 2012.

The final player drafted — No. 1,217 — was Riverside Community College left-hander Garrett Irvin, who went to the Red Sox.

An appreciation: French Open bids adieu to its ‘Bullring’