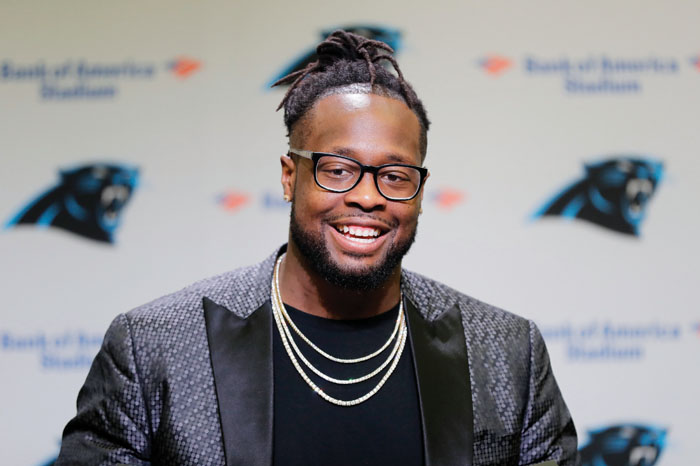 CHARLOTTE (AP) — All it took for the Carolina Panthers to land All-Pro defensive tackle Gerald McCoy was a one-year deal worth up to $10.25 million — and a vegan lunch with some future teammates.

When some of Carolina’s core players heard general manager Marty Hurney was considering signing the free agent defensive tackle, they organized a lunch at a local vegan restaurant during McCoy’s visit to Charlotte last week knowing the 31-year-old McCoy had given up eating meat five months ago.

Luke Kuechly, Greg Olsen, Kawann Short, Shaq Thompson, Trai Turner and Christian McCaffrey all attended the lunch, hoping to convince their former division rival to sign with Carolina rather than the Baltimore Ravens or Cleveland Browns, the other two teams who were courting the six-time Pro Bowler.

It worked better than the Panthers could have imagined.

McCoy said the lunch — and camaraderie he noticed with the players — was a big reason why he signed with the Panthers.

McCoy said it felt as if he was back in high school again being recruited by Oklahoma.

He recognized that the players could have been doing something else, but said it felt special that they showed up to give him a sales pitch and eat at a restaurant they normally wouldn’t visit.

“I left that lunch feeling I could fit right in here,” McCoy said.

The 31-year-old McCoy has been one of the better players at his position over the past nine seasons with the Tampa Bay Buccaneers, and is the only NFL defensive tackle with at least six sacks in each of the past six seasons. He has 296 tackles and 54½ sacks during his career.

Hurney said in a statement that “it’s great to have Gerald on our side now. We are very familiar with his skillset.”

McCoy likes being on the same team as quarterback Cam Newton instead of chasing the former 2015 league MVP around the field twice a year.

He’s admired Newton from a distance, calling him “the best escape artist in the league.”

McCoy’s son is a big fan of Newton too, always using him to play on Madden football.

McCoy isn’t worried about where he will fit in on Carolina’s defensive line, one that will rotate between a three- and four-man front this year.

“In this league you have to be a Swiss army knife,” McCoy said. “And (defensive coordinator) Eric Washington has a great plan in place where we can move guys around.”

At Oklahoma he supported his school by going to volleyball, basketball and baseball games.

That said, he doesn’t seem to have any ill feelings toward the Bucs jettisoning him after nine seasons and quickly giving away his No. 93 jersey to replacement Ndamukong Suh.

“Business is business,” McCoy said. In 2012 Peyton Manning was released by the Colts. At that point, my perspective on this league changed. If you can let a person like Peyton Manning go, then anybody can be released. It’s a business.”

The New York Jets running back was back on a practice field for the first time in 17 months and was downright giddy. And, he let his new teammates on defense know all about it.

“It was amazing,” a grinning Bell said Tuesday after the Jets began their three-day minicamp. “Just running around and just being able to trash talk and catch some balls and just sweat in your helmet — you know, things that we kind of take for granted when you’re playing.

“The fact I had that whole year off and came out here and played football again, it felt so good.”

Bell, who sat out voluntary workouts this offseason, was limited in his first full practice with the Jets. But, he was plenty involved with ratcheting up the overall energy on the field — talking smack with defensive players throughout.

Bell signed a four-year, $52.5 million deal — including $35 million guaranteed — with the Jets in March after sitting out all last season with Pittsburgh in a contract dispute.

The 27-year-old running back has been around his teammates sporadically throughout the offseason, but chose to work out on his own with a personal trainer in Florida rather than participate in the team’s voluntary workouts.

So, his arrival Tuesday made for a playoff-sized gathering of media finally getting a glimpse of Bell in uniform and taking handoffs from Sam Darnold.

“When he’s out there, when he’s in the huddle, a defensive coordinator doesn’t know where he’s going to line up, doesn’t know what’s coming his way,” Darnold said. “With Le’Veon out there, we definitely become a little bit more unpredictable.”

Bell has rushed for 5,336 yards and 35 touchdowns, and has 312 catches for 2,660 yards and seven scores in his NFL career. Using a deliberate running style that throws off defenders, his 128.9 yards from scrimmage per game over his career is the best mark in the NFL since the 1970 merger.

But, after missing a full season, there are some who wonder if Bell will still be the same versatile and dynamic force he had been as one of the best running backs in the league.

“Maybe people forget a little bit just because they haven’t seen it in a long time,” he said. “It’s normal. That’s what humans do. But I feel like once I go out here, I play, first game coming up, people will be reminded.

“Right now is not the time.”

Coach Adam Gase said the Jets will be “smart” with Bell during minicamp, limiting his carries and physical activity while he works himself into football shape and gets comfortable in the offense.

“A lot of people are expecting a lot from me, and I’m expecting a lot from myself,” Bell said. “So, I don’t want to let nobody down. I want to go out there and be the best me. That’s why I was training one-on-one with my trainer, getting to where I need to get to make sure I’m in shape when I come here I can take every snap — if they ask me to.”

There were recent reports that Gase was not in favor of the Jets signing Bell at the price he ended up costing. But the coach said above all else, he’s excited about having a running back of Bell’s caliber. Bell says the two have a “great” relationship and cleared the air.

There’s also the hope that perhaps the Jets could even get him to perform at a level higher than his best days with Ben Roethlisberger and the Steelers.

“As a coaching staff, you’re always going to think that,” Gase said. “As a player, I know that in his mind, he thinks there’s more he can do.”

Despite Bell not being at the facility during the offseason, he and Gase remained in constant contact — with the running back routinely texting the coach videos of his workouts. Bell has also chatted often with teammates, including Darnold and fellow running back Ty Montgomery, to get a better feel for the playbook.

Bell still feels rusty, and that’s understandable after such a long layoff. He has no doubts, however, that he’ll be at full speed when he needs to be.

He thinks he’ll get more opportunities in Gase’s offense, which is saying a lot since he had a whopping 406 touches during the 2017 season. Bell also is excited by what he has seen from Darnold, whose progress in his second year will be directly tied to how he and his star running back click.