High school basketball: Spry growing in a lot of ways 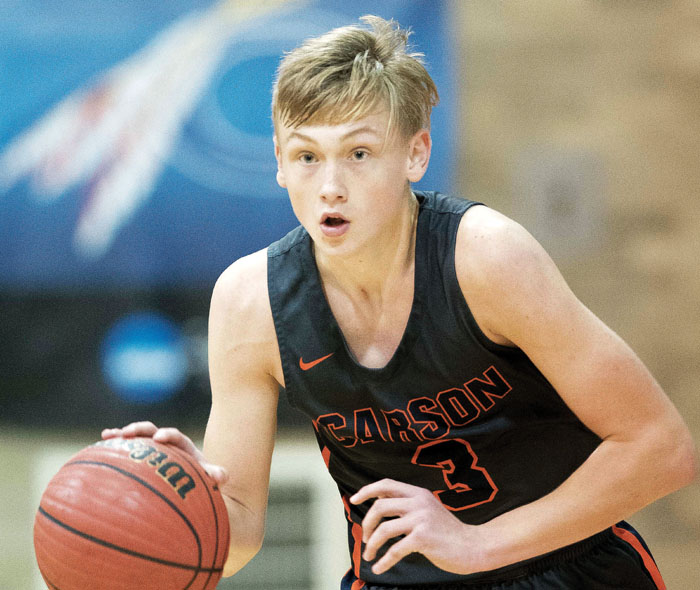 Physically, he’s grown quickly and impressively the last two years, surging upward from a 5-foot-7 sophomore to a senior who is pushing 6-foot-4.

Growth spurts are commonplace for teenage boys, but most them peak at 5-11, not 6-4.

The change in size has been mostly good news since Spry’s passion is basketball, but it’s taken him some time to figure out his new body. You can do a lot more rebounding and you can score from a lot more places and a lot more easily at 6-4 than at 5-8, but he’s still experimenting with what works for him and what doesn’t.

“Mark’s potential really is sky-high,” Carson head coach Brian Perry said. “He’s a late-bloomer. He just needs some time to develop. You know he’s going to put in the work it takes. He’s that guy that shows up for everything. If the gym is open, he’s there.”

Pfeiffer University is going to give Spry a chance to see how good he can become. He’ll be part of the Falcons’ basketball program next season. He’s likely to be a member of the jayvees as a freshman, but that seems like an ideal spot for him to build his game and his confidence. He understands it’s up to him to prove he can play someday for the fast-paced varsity that averaged 102.5 points per game last season.

“Pfeiffer came to watch us practice a few times, and I think mostly they were coming to watch Cole Perry,” Spry said. “But they got interested in me, came to some games and invited me to visit the school and come to open gyms. I did well enough that they told me I had a spot on the team if I wanted to come there. It’s all worked out really well. Pfeiffer has a great criminal justice program, and that’s the major I wanted. And it’s only 15 minutes away. I can stay at home and still have the chance to play college basketball. Pfeiffer is run-and-gun and I like that style of play.”

Spry played mostly on the East Rowan jayvees his sophomore season, although he got into a handful of varsity games. As a junior, he made an impact in several varsity games for East. He scored in double figures three times, including rivalry games against South Rowan and West Rowan.

He transferred to Carson prior to his senior year, which put the Spry family in the unusual position of cheering for two different schools in the North Piedmont Conference. Mark’s 5-10 sister, Mary, was a standout as a varsity freshman for coach Kevin Holland’s East Rowan girls.

Spry fit in smoothly with new teammates at Carson. He managed to carve out a role on a team that had four capable scorers in Perry, EJ Clark, AJ Mauldin and Javon Smith. Spry scored 13 in a win against Central Cabarrus. He had 15 the night the Cougars put it all together and blew out South Iredell. He had a 12-point effort against an athletic Statesville team. For the season, he averaged 5.0 points per game.

“I think I improved in all aspects of  basketball,” Spry said. “Before this year, I was only focused on being a 3-point shooter and I wasn’t very good on defense.  I worked every day at becoming a better defender and at helping the team any way I could.”

Perry agrees. He said the scoring stats don’t tell the story of how much better Spry got as the season went on.

“He was good for our team and really helped us,” Coach Perry said. “He started seeing that with the size he has now, he has the opportunity to attack the basket a lot more. And he’s more athletic than people realize.”

Perry took Spry to a Pfeiffer open gym. When the players started scrimmaging, it only took a few minutes for North Stanly coach Paul Childress to come over to Perry and ask, “Who is that kid?”

Spry was the guy he was talking about.

Spry has a long way to go, but he may surprise people before he’s done with basketball.

He’s a kid who grows on you. Just give him time.