Here we go: Just like old times, Federer vs. Nadal in France 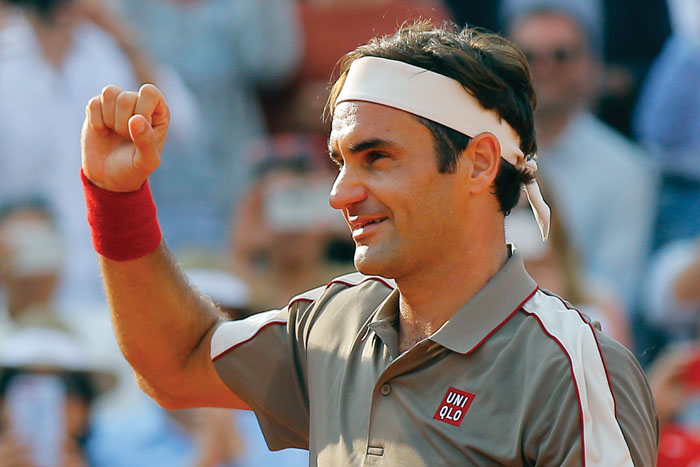 PARIS (AP) — Roger Federer knew when he returned to the French Open that, if things went exceedingly well, he eventually would find himself face-to-face with Rafael Nadal.

Federer put away Stan Wawrinka after a 75-minute rain delay Tuesday, converting a break point for just the second time in 18 chances and quickly wrapping up a 7-6 (4), 4-6, 7-6 (5), 6-4 victory over his friend and Swiss countryman to reach the semifinals at Roland Garros.

And what a showdown comes next: Federer vs. Nadal for a spot in the final.

They are two titans of tennis, with Federer holding a men’s-record 20 Grand Slam titles, and Nadal next with 17.

Nadal, who won 11 of his trophies in Paris, has gotten the better of their rivalry over the years, leading 23-15 overall, 9-3 at majors, 13-2 on clay and 5-0 at the French Open, including four finals.

“My next opponent is not too bad. He can play on clay, unfortunately,” Federer joked to the crowd at Court Suzanne Lenglen.

They haven’t met at Roland Garros since 2011. Federer, who has won their most recent five matches, last entered the field in 2015, when he lost to Wawrinka in the quarterfinals. He pulled out with a bad back in 2016, then skipped the entire clay circuit in 2017-18.

“If you to do or achieve something on the clay, inevitably, at some stage, you will go through Rafa, because he’s that strong and he will be there,” said Federer, at 37 the tournament’s oldest semifinalist since 1968. “If I would have had a different mindset — to avoid him — then I should not have played the clay.”

The only time Federer won the French Open, in 2009, he didn’t need to face Nadal, who was knocked out in the fourth round by Robin Soderling. That’s one of only two losses for Nadal in 93 career matches at the place.

There was very little drama in Nadal’s quarterfinal victory this time, a 6-1, 6-1, 6-3 stroll against No. 7 Kei Nishikori, who went through a pair of five-setters the past two rounds.

“He didn’t let me play how I wanted to play,” Nishikori said, “and especially if I’m not fresh, it’s not easy to stay with him.”

Federer vs. Wawrinka, meanwhile, lived up to the billing, a 3½-hour tussle between a couple of guys who won a Davis Cup title and Olympic gold medal in doubles together.

Coming in, Federer held a 22-3 edge head-to-head, but Wawrinka knew this: All three of his victories had come on clay, including four years ago in the same round, on the same court.

They were locked in a taut fourth set at 3-all when clouds grew thick and charcoal-colored. Thunder rumbled nearby. It was difficult to see, because there are no artificial lights. Play was suspended as a storm arrived. But it didn’t last long.

When action resumed, Federer needed only 10 minutes to take control, getting his second break of the match by smacking a big cross-court forehand to a corner that Wawrinka couldn’t handle. It was 5-4, and Federer only needed to hold serve to end it.

That turned out to be a tad complicated.

He double-faulted for the only two times of the entire afternoon, once on his second match point. He was forced to deflect a break point for Wawrinka, doing so with a serve-and-volley winner. And then, finally, on his third match point, Federer closed it out with a volley, then hugged Wawrinka at the net.

“A tough, tough one, for sure,” said Wawrinka, who was coming off the longest singles match of his career, a 5-hour, 9-minute victory over Stefanos Tsitsipas.

Wawrinka credited Federer, saying, “It was important to be aggressive, to be inside the court, and he did that better than me.”

Attacking the net at any opportunity, Federer won the point on 41 of his 60 trips forward. It’ll be fascinating to see whether he does that against Nadal, too.

The quarterfinals on the other half of the men’s draw are Wednesday: No. 1 Novak Djokovic vs. No. 5 Alexander Zverev, and No. 4 Dominic Thiem vs. No. 10 Karen Khachanov.

Konta eliminated 2018 runner-up Sloane Stephens 6-1, 6-4, grabbing 21 of the last 22 points she served, to become the first British woman in the French Open’s final four since Jo Durie in 1983.

Until this year, Konta had entered the clay-court major four times, losing in the first round each time.

“I don’t think any player on tour can go on court against me and feel like they’ve definitely got it.”

Doc is in: Emrick not slowing down in his…