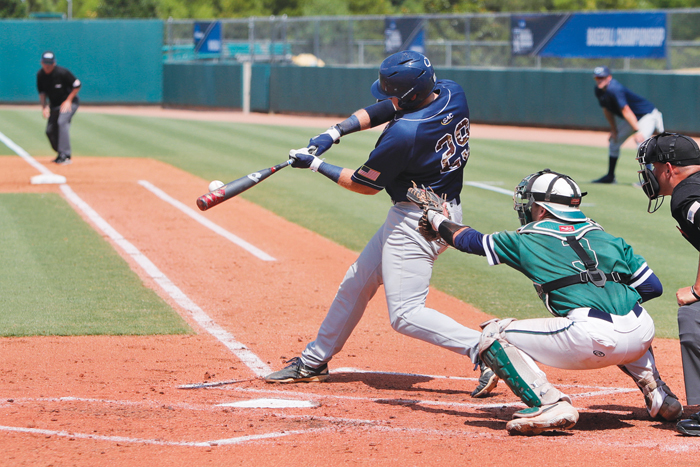 Photo courtesy of Leslie Poteat ... Catawba’s Heath Mitchem connects for one of his two hits during Tuesday afternoon’s World Series game in Cary. It was the final game, Mitchem, as the Indians were eliminated by Mercyhurst, 8-5.

A season that included a 13-game winning streak and a pair of late-May victories against second-ranked North Greenville wrapped up at the USA Baseball Training Complex, where the Indians dropped an 8-5 decision to Mercyhurst and were eliminated.

“Things have to go your way and today, they didn’t,” coach Jim Gantt said, moments after Catawba (47-14) found out just how fragile success can be. “I remember West Chester came down here a few years ago with a first-year head coach and they won it all — made it look easy. Sometimes it just works out.”

It didn’t for Catawba. Mercyhurst (35-15) crunched eight extra-base hit hits — including home runs by Jack Elliott and Matthew Schneider — and stayed alive in the double-elimination tournament.

“I feel like we’re playing our best baseball,” winning coach Joe Spano said. “And we’re finally being rewarded for it. We know any win here is difficult. We’re just hoping to hang around as long as we can.”

The Lakers, third-place finishers in the Pennsylvania State Athletic Conference’s West Division, battered Catawba right-hander Riley Myers for five runs on six hits in 4 1/3 innings. Myers “pitched for the cycle” and took his first loss in his final appearance.

“The few mistakes I made, they hit hard,” he said, after fanning seven and walking one. “That’s what a good team is supposed to do.”

For the second straight game, Catawba was victimized by a five-run fifth inning. Elliott’s three-run homer to right field gave Mercyhurst a 5-3 lead and knocked Myers out of the game.

“I struggled against (Myers) my first two times up,” said Elliott, a sophomore third-baseman with a .227 batting average before the first pitch. “He struck me out twice with fastballs. I just wanted to put a barrel on the ball.”

Elliott jumped on a first-pitch fastball and drove it 363 feet, putting the Lakers ahead for good.

“He made a good adjustment,” said Myers, who will spend his final year of eligibility at Wake Forest. “Two times, I beat him with fastballs in. He  wasn’t going to get beat again. He got a pitch that was right there … and that’s just the way it goes.”

The blast was Elliott’s fifth of the season and wiped out Catawba’s 3-1 lead. Facing husky right-hander Matthew Minnick in the top of the third, the Indians tied the score on senior Heath Mitchem’s ground-ball single to right field. Three batters later, Joe Butts served a two-run single into shallow left.

“Their starting pitcher was great. I wasn’t seeing his curve ball at all,” said Butts, who collected three RBIs. “I was just lucky their third-baseman was playing in.”

Jackson Raper’s eighth home run of the year — a 393-foot missile that cleared the wall in right-center — drew Catawba within 6-4 in the top of the sixth. Mercyhurst answered with two runs against reliever Sawyer Strickland in the home seventh, when Schneider tripled off the center-field wall to plate one and teammate Josh Surowiec beat out a two-out infield hit to the right side, providing an 8-4 advantage. Catawba’s final run crossed in the top of the ninth when Butts singled home Jeremy Simpson. The Indians had runners at first and second when reliever Jared Kapturasky fired a game-ending third strike past Raper.

Afterward Gantt, to his credit, was left reaching for answers rather than excuses.

“I’m proud of these guys,” he said. “They were never out of anything. We had a lot of good kids here — and it’s always more fun with the good ones.”

NOTES: Mitchem had two hits in his final Catawba game and finished with a .325 average. Teammate Hunter Shepherd went 0-for-8 in the two CWS losses and closed the year at .358. … Mercyhurst had four doubles, two triples and two home runs against four Catawba pitchers.