Cabbage is a spring vegetable, too; try it now 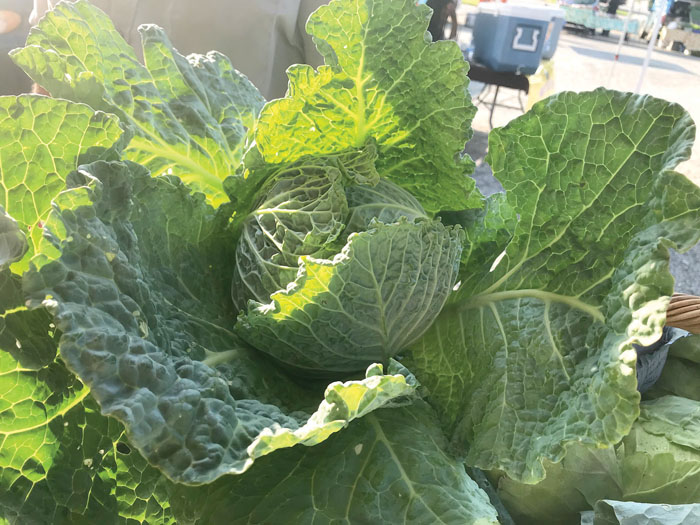 At last week’s Salisbury-Rowan Farmers Market, David Correll said, “please do something about cabagges. I got cabbages coming out my ears!”

And they looked great, from the purple cabbage to a nearly perfect head of crinkly-leafed Savoy cabbage.

Too often, we relegate cabbage to being boiled to death and served only in fall and winter, but there’s so much more you can do with it. In many cases, just pretend it’s lettuce and used it in salads. Put it on a burger or sandwich for extra crunch. Use a leaf of cabbage to serve chicken or tuna salad, or a cool shrimp salad. Think outside the boiling water.

Grills wedges of savoy cabbage and serve them with buttermilk ranch dressing and a sprinkling of cooked bacon.

Cabbage cooked with apples is a delicious side dish. Try a raw salad combination of cabbage, apple and kale, and dress with a simple dressing of olive oil, lemon juice, salt and pepper.

Use cabbage in your tacos instead of iceberg lettuce, it’s more authentic. The cabbage is especially good with pork fillings, such as ground pork. It’s also a nice, cool contrast to chorizo.

Everyone has a favorite cole slaw recipe, probably one handed down from mother or grandmother, or one from a barbecue restaurant.

There’s the creamy vs. vinegary dressing debate, and each has passionate defenders.

One of the best slaws I ever tasted had a vinegar-based dressing with chunks of blue cheese. The creamy, sharp cheese goes well with cabbage. Add chili powder or cayenne pepper to the dressing, for a kick, or add jalapeños, serranos or other chili peppers. It’s up to you whether you remove the seeds and ribs.

Fresh dill is a great addition to slaw dressings, especially if you want to freshen up a creamy dressing. Add parsley, cilantro, fresh thyme or basil to the slaw.

Slice two small heads of cabbage, either green or savoy or a mixture. Napa will also work well. Add to a large bowl with 1 medium or 3 small cucumbers, sliced but not too thinly. Add the white and green parts of two green onions, and 1/2 cup chopped fresh dill.

To dress it, combine the juice of one lemon (or two if it’s small), 1/4 cup olive oil, 2 tsp. or up to a half tablespoon of salt and freshly ground black pepper. Add slivered almonds and toss.

There is a bit of debate on the right way to fry cabbage. Some use extra oil, some add onions and a lot of sugar, some don’t use onions. Some add spices like caraway seed. Some use no sugar at all.

But some things remain the same. It’s basic ingredients are cabbage, bacon, salt and pepper

A pinch or more of brown or white sugar

Cook the bacon in a large pot over medium heat. When bacon is crisp, remove from pan and add onion. Season with salt and pepper, and cook until just tender, with little browning. Add cabbage, season with salt and pepper. Add sugar, if desired. Put lid on pan and cook until cabbage is desired doneness, 10 minutes or more. Adjust seasoning and serve.

If adding spices, do it when you add the cabbage.

Some like a sprinkling of vinegar on the cabbage, as well.

Toss cabbage and 1/2 tsp. salt in a large bowl. Massage vigorously with your hands until cabbage begins to release water and soften, about 2 minutes. This will season and tenderize the leaves. Drain; set aside.

Anchovies will fall apart once the dressing is mixed together and do not leave a fishy taste.

White miso is a slightly sweet paste made of soybeans and rice, and should be in the Asian section of your supermarket.

Add to a greased baking dish, sprinkle cheese on top and bake for 20 minutes or until the cheese is melted and golden.

Adapted from dietdoctor.com, this is a keto-friendly recipe. But it is heavy on fat. Try substituting Greek yogurt for the sour cream.

Cheddar cheese is the most popular cheese in the comments on the recipe.

Mix all ingredients in a bowl and let sit a few minutes for flavors to blend. Great on chicken tacos, fish tacos, pork tacos.