Wiley Cash will not let history be forgotten 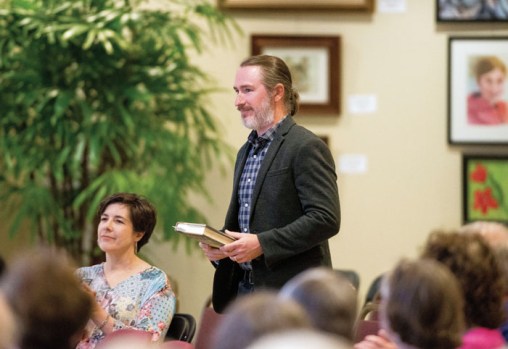 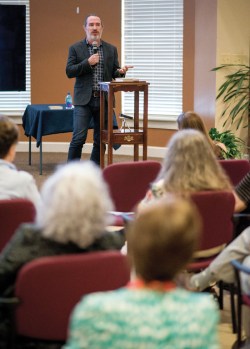 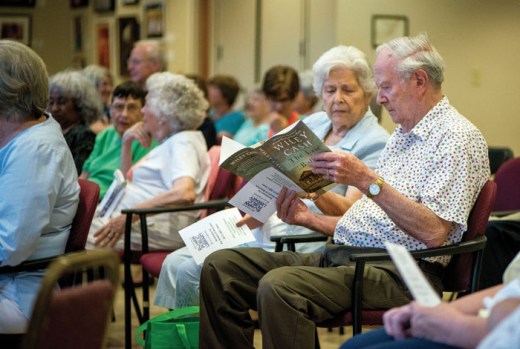 JON C. LAKEY/SALISBURY POST Bobbie Ann and J.W. Brown look over the book "The Last Ballad" by author Wiley Cash while they wait for the start of the program. The Friends of the Rowan County Public Library held their annual meeting at Trinity Oaks on Thursday evening with a special guest speaker Wiley Cash, Author. Salisbury, NC 5/30/19

Cash is at ease with his audience.

“I grew up in Gastonia,” he said, “and when I tell people that they sort of don’t know what to say.” He told a story about a man who’d been driving late into a rainy night. He came to a major intersection and had no idea where he was. A woman pulled up next to him, he rolled the window down and asked her, “Excuse me, but where are we?” She quickly responded, “Hell!” and drove off.

Cash’s parents and grandparents worked in mills, so when he wrote his most recent novel, “The Last Ballad,” he thought of them and wondered why none of them knew the story, why he’d never heard it in school.

“The Last Ballad” is about Ella Mae Wiggins, a textile worker, single mother and upstart, who not only took part in the Loray Mill strike in 1929, she wrote a ballad about the plight of the workers that spread nationwide.

The strike turned violent and two people were killed. Many more were injured or left homeless and jobless.

When he did unearth the story, he didn’t want to do a straight historical piece. Nine books had been published about the strike, all of them unheard of.

He knew facts. Ella was born in Tennessee and her family lived in a lumber camp. They came to North Carolina when mill owners promised better work, housing, schools, churches and higher wages.

But Ella worked six, 12-hour shifts a week for $9 at American Mill No. 2 in Bessemer City. She had nine children, four of whom died. Her moonshine-making husband left her. She begged and begged her boss to put her on the day shift so she could be home with her children, especially her sick little girl.

She was denied every time. When Union organizers talked about a 40-hour work week, at $20 a week, and equal pay for equal work, she was fired up.

The first rally was on a Sunday, her only day off, and she took the risk of losing her job, her children, even her own life, and went.

Cash knew he had to do a lot of research and “write with the chops I did not have. I wrote two novels to find out how they work. I could tell the events, but that’s not a story. A story is an inciting incident,” a break in routine. “The strike was not the story. What happened is the story.”

He didn’t want to write a novel of good strikers and evil bosses. He wanted to tell Ella’s story. Ella worked in a Cowpens, S.C., mill; Cash’s grandmother is from Cowpens. Ella was a very outspoken person. “I created other characters to see how they respond to Ella as she passes through their lives.”

Ella was smart. She knew how to get what she wanted. The people in the novel talked with her and Cash learned Ella through them. “She is the weather of the novel.”

“Why did no one know this story,” Cash asked.  “Because we don’t talk to the Ellas, we talk to the bosses.”

Cash did not want a pat ending. “I want the book to be rich, to feel like life,” he said. People read history to find out what happened. “They read fiction to know what it felt like.”

Eileen Hanson-Kelly told Cash she was part of a committee that organized a tribute to Ella Mae Wiggins in 1974, and put a marker on her grave. The AFL-CIO was part of the effort. Cash said a committee is working on a statue of Ella in Bessemer City.

The sad thing is her children were all told the union killed their mother, and they hated unions for the rest of their lives.

“So many wrong stories flourish” when things are hidden, Cash said. “History can be erased by being forgotten.”

Cash’s grandparents were mill workers, and his parents, his mother from Gastonia and his father from Shelby. Then they left the mills for the suburbs, and that’s how Cash grew up. “My life was easy because of my parents and grandparents making sacrifices and building things, doing hard things.” He remembered a story from his father, who died in 2016. When he was a little boy, he had a nickel, and dropped it on the porch, where it fell through the floorboards. Because the mill owned the house, they couldn’t pry up the boards to find that nickel. For his entire life, his father never forgot that nickel.