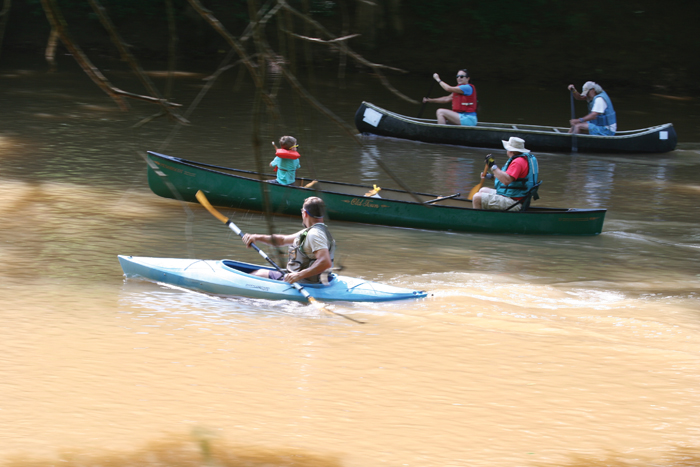 Bill Kepley / Salisbury Post - At center, Liam Ranes and grandfather Butch Hollifield edge by the competition during the South Yadkin Canoe and Kayak Race on Saturday.

The concept of family tradition can bring to mind a multitude of images: christening gowns, collective vacations, holiday gatherings and more.

For the Hollifield Ranes family, one such tradition is nearly three decades in the making: Butch Hollifield has been involved with the annual South Yadkin River Canoe and Kayak Race since its inception 34 years ago, and the 2019 race held Saturday marked the 29th year his daughter, Dawn Ranes, had paddled along with him.

“We’ve had her in a canoe since she was in a car seat,” said Hollifield, adding that the family goes canoe camping at least once a month.

It would appear that this early introduction to the water is another familial right of passage. Ranes paddled with her oldest child, 5-year-old Arthur, and Hollifield, with her youngest, 4-year-old Liam.

“I just wanted to get the kids involved in it. It’s something fun, something to get them outside,” Ranes said. “They don’t play a lot of sports. They’re sort of bookish, but they do like to go canoeing and kayaking with their ‘Pop.'”

As the root of the family’s involvement with the race, Hollifield spoke of his own, original tie in. He was a classmate of one of the race’s original orchestrators, Sam Bonds. Together with Jeff Gobble, the pair put the race on until 2013.

“They finally got to the point that they had other things they wanted to do in their lives, so they said, ‘we’re giving it up’,” said Wayne Sasser, part of the race’s new group of organizers: Salisbury’s Scout Troop 448.

The troop had been involved or assisting with the race for a number of years, with Jack Kepley, Scoutmaster emeritus for Troop 448, making hand-carved miniature paddles for the awards at the first race. Now, race winners from the race’s broad number of categories receive certificates framed by Scouts, and every participant receives a ticket for a raffle for various prizes.

Hollifield said he’d had a hand in convincing the troop to move from assisting with to planning and producing it.

Scout leaders, volunteers and event officials said the race wasn’t yet large enough to serve as a fundraiser, though local sponsorships did help offset the costs. “Some day it will be. We have hope,” said Scoutmaster Alfred Wilson.

In the interim, the new organizers ran the race like a well-oiled machine for their seventh year in charge. The biggest hiccup of the day was emblazoned on their shirts: each was labeled for the ’34rd’ annual occasion.

For Wilson, the typographical error exemplified what the day was all about. The race offered an opportunity for family and friends to have fun, laugh and relax, he said, with the added bonus of giving Scouts a chance to get out on the river.

“This is a nice, easy race course,” said Ranes. “It’s a great one for the kids.”