For Wiley Cash, writing is the hardest thing to do 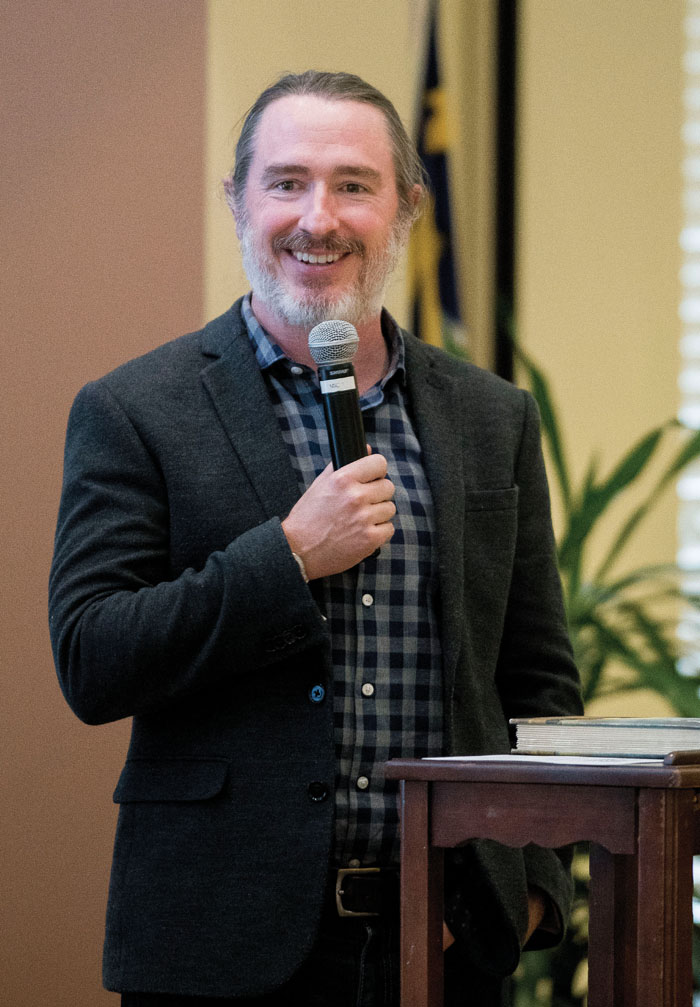 Wiley Cash spoke at the Friends of Rowan Public Library annual meeting Thursday night. Attorneys  Tom Caddell and Lucinda Fraley, who work with the Friends foundation, received Friends of the Year awards for their help with the new West Rowan branch, in the former Cleveland Elementary School media center and auditorium.

A new board of directors for 2019-2021 was approved, including Mary Frances Edens, April Everett, Amanda Harwood, Sammie Hinshaw and Mary Ann McCubbin.

Cash told the Friends about crafting his most recent novel, “The Last Ballad,” the story of a deadly 1929 mill strike in Gaston County.

He also talked about his love of libraries and answered questions about writing.

“I grew up a child of public libraries,” Cash said. “I researched there, I worked there.” At one point Cash and his wife ended up living in his in-law’s house while they looked for a place to live. They lived in his wife’s old bedroom with their cat.

The phone rang constantly, because his in-laws did not use the Do Not Call list, and the answering machine picked up every time. It was a little too much. He thought about a coffee shop, but settled on the library, where “people were studying, getting job training, learning about the Internet, and some were there because they had nowhere else to go.”

He’s been to Salisbury before and loves it. They almost moved here, but his wife, an attorney, did not get the job she applied for. “I could have been your next John Hart,” Cash joked, “only not as successful and not as good looking.”

When researching “The Last Ballad,” Cash thought it would tough to write the story and do it well. “Writing a book is the hardest thing,” he said. “Getting an agent, finding an editor,” that’s easy by comparison.

Although it was not that easy at first. Cash wrote his first book while in graduate school. He has a Ph.D. in American Literature, but took all the creative writing classes. He quickly found an agent, who shopped the book everywhere. It was rejected over and over for five years.

“I broke up with that first agent,” Cash said, laughing. A second agent had e-mailed him previously, so Cash got in touch and they worked on it for months, while the agent emphasized, “I am NOT your agent.” Then he told Cash he thought he could sell it, and asked if he had a second novel. Cash did, in rough form, so he wrote a summary and the agent agreed to represent him and the book was published.

Cash teaches writing at the University of North Carolina at Asheville and leads workshops, doing intensive short programs. He has two small children and another book under contract. His wife is also a photographer. “My job is not like the other parents’,” he said.

He does his best writing when very absorbed. When the writing is good, he takes a break. “It feels so good, so warm. I like to bask in it, then I go back.” His characters have been living with him for a while, so he can do quick revisions.

Someone asked if he outlines his books, and he usually does not, but when he wrote “This Dark Road to Mercy,” he needed one to keep up with the home run contest between Sammy Sosa and Mark McGwire so  his character, a washed-up baseball player, could follow it.

In “A Land More Kind Than Home,” Cash knew he wanted three narrators, three voices. He knew the starter for the story, a child suffocates at a church service, but that was just the rock in the pond. He wanted to write about the ripples.

“In a mystery or thriller, it’s about the action, the solution, the explosion,” but Cash focuses on people who make decisions that affect their lives and others.

Wiley Cash will not let history be forgotten