Drew Powell at it again in the Indoor Football League 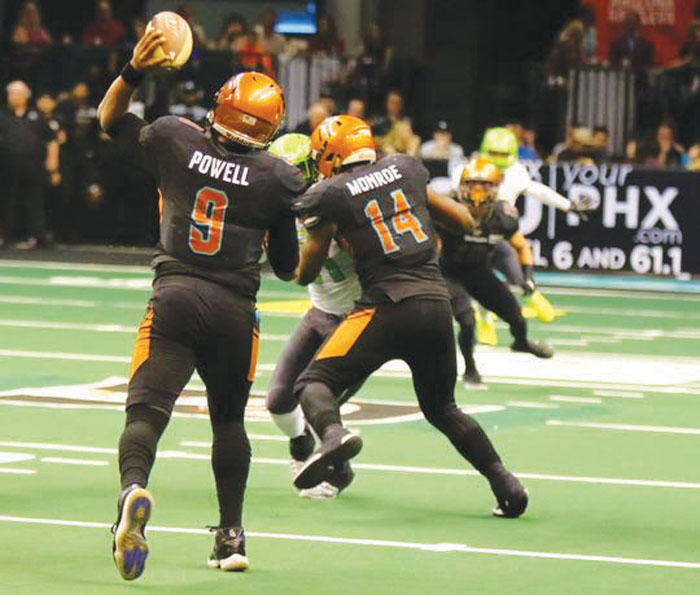 PHOENIX — Former Livingstone quarterback Drew Powell is up to his old tricks.

Powell, who started at Livingstone for four years (2012-15), setting 11 school records and four CIAA marks, was the star of the Indoor Football League last year, leading the Iowa Barnstormers to the United Bowl championship.

Powell’s MVP season included the following numbers: He completed 68 percent (154 of 226) of his passes for 1,604 yards and 34 touchdowns (only 4 interceptions). If the yardage sounds low, keep in mind that the field is just 50 yards. He also rushed for 939 yards and 23 more TDs. That’s a mind-boggling 57 times that Powell got the football into the end zone.

Now, Powell, a a 6-3, 220-pound lefty from Upper Marlboro, Md., is lighting up the scoreboard again. It’s the same league, but a new team. This season, Powell is slinging the pigskin in the desert, for the Arizona Rattlers.

The IFL season began in late February, and according to Malcolm Nelson, a defensive coach who was with Powell at Livingstone and in Iowa last season, the QB was attending tryouts for the Canadian Football League and others.

No opportunities from the CFL came for Powell, but the IFL gladly welcomed him back. He signed with Arizona on April 23, when the Rattlers were already 7-0.

After a low-key start against Nebraska on May 4, Powell was back to his sensational self in San Diego on May 19. He lit the Strike Force’s defense up with nine touchdowns — passing for four and running for five more. Powell was 12 of 17 passing for 152 yards and rushed for 104 yards on 11 carries.

Nelson, too, left Iowa this season to become a defensive coach for the first-year Tucson Sugar Skulls. Last Saturday, Nelson had his first opportunity to be coaching against — and trying to stop — Powell.

Against Nelson and Tucson, Powell was nearly perfect, completing 13 of 15 passes for 180 yards and five TDs. He ran for 83 more yards on eight attempts, with two more scores.

Arizona stomped Cedar Rapids on Saturday night, 56-0, but on June 8, Nelson and Tucson get another chance at Powell and the Rattlers, although the game will be in Phoenix.

The Rattlers have already locked up a playoff berth and conclude the regular season on June 15, at home against San Diego.

After that, the playoffs begin and Powell will be trying to lead Arizona to a United Bowl win and for him, a second straight IFL championship. And it could come against Powell’s old team, as the Iowa Barnstormers are 11-1.

Last July, the Powell-led Barnstormers defeated the Sioux Falls Storm, 42-38, for the team’s first title in its 23-year history.

“I’ve had a lot of personal awards during my life, but I’ve never had a feeling of hoisting a trophy or putting a ring on my finger,” Powell said, after that championship game. “I just want to say thank you to my teammates for this.”