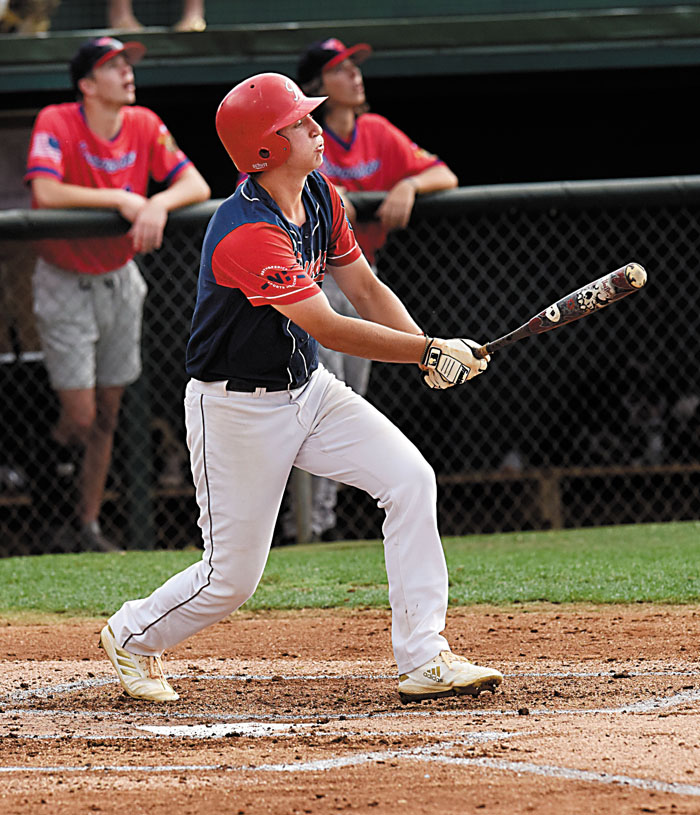 There have been no two-game losing streaks. Each frustrating loss has been followed by a victory.

A night after letting a lead evaporate at Stanly County, Rowan scored early and often and clobbered Mooresville, which won’t be at full strength until the high school playoffs are over.

Rowan (9-3) scored three runs in the first inning in Friday’s 10-2 road romp and never looked back.

Rowan pitched “staff,” but the bullpen came through with five shutout innings to finish off the Moors (2-5). Rowan’s defense was good, with shortstop Zeb Burns, second baseman Bryson Wagner and first baseman Jake Harris teaming for double plays in the third and fourth innings after Mooresville had gotten its lead-off man on. As much as anything, those DPs knocked out Mooresville.

Rowan’s first inning went the way it’s supposed to. Jordan Goodine and Cole Hales got hits to set the table. Wayne Mize’s sacrifice fly made it 1-0. Luke Barringer’s screaming triple made it 2-0. Bo Rusher lifted Rowan’s second sacrifice fly of the inning, and it was 3-0. That figures to be a tough top half of the lineup for opposing pitchers to wade through all summer,

Rowan starting pitcher Olen Stamper got a strikeout with the bases loaded to dodge trouble in the bottom of the first. But Mooresville strung together three hits, including a two-run double by Mason Staz, in the second inning to tighten things up.

Rowan made it 4-2 in the third when Barringer’s line-drive single up the middle scored Goodine. That was the 21st run scored for Goodine, who leads the team in that department.

When Stamper hit the first Mooresville batter in the bottom of the third, his night was over. Jonathan Spry (2-0) answered the call to the bullpen and got a double-play grounder.

Harris and Burns got on base to start the Rowan fourth, and Goodine’s roller in front of the mound resulted in a disaster for the Moors — a three-base throwing error down the right-field line that allowed two runs to score. Goodine was thrown out at home trying to score on Hales’ grounder, but Rowan took a 6-2 lead to the bottom of the fourth. That’s when reliever Corbin Durham put up a zero with the help of Rowan’s second twin killing.

Chandler Lippard, who has been out for a while with a hamstring injury, returned to the lineup as the DH on Friday. He hammered one toward the gap leading off the fifth, but appeared to re-aggravate the hamstring problem when he rounded first base. That was the only negative of the night for Rowan. CP Pyle went in to run for Lippard and quickly made his way around the bases. He scored Rowan’s seventh run on a wild pitch.

Durham shut down Mooresville 1-2-3 in the fifth to keep the score at 7-2, and Rowan added its final three runs in the sixth. That inning began with consecutive walks to Mize, Barringer and Rusher. Pyle’s two-run double made it 9-2. Steven Smith, who had replaced Burns at shortstop, accounted for Rowan’s 10th run with the team’s third sac fly of the night.

Parker Lippard handled the bottom of Mooresville’s lineup in the sixth. Cameron Graham pitched a 1-2-3 seventh.

NOTES: The first-inning sacrifice fly gave Mize his 27th RBI, an incredible total for 12 games. That well-stroked fly ball was the only time Mooresville got him out. He walked twice, singled in the fourth and doubled in the seventh. Mize’s two-base hit would’ve easily scored Hales from first for another RBI, but it bounced over the wall for a ground-rule double and Hales had to return to third base. … Rowan experienced some base-running and sliding adventures on Mooresville’s turf field …  Mason and Ty Staz, pesky players from North Iredell High, had five of Mooresville’s six hits. … Rowan is off on Saturday. There’s been a change from the original Sunday schedule that had Rowan playing a doubleheader against Eastern Randolph. The teams now plan to play one game at Newman Park on Sunday at 7 p.m.  Eastern Randolph (2-6) lost 8-2 to Randolph County on Friday. … Rowan also is home Monday against Stokes County.