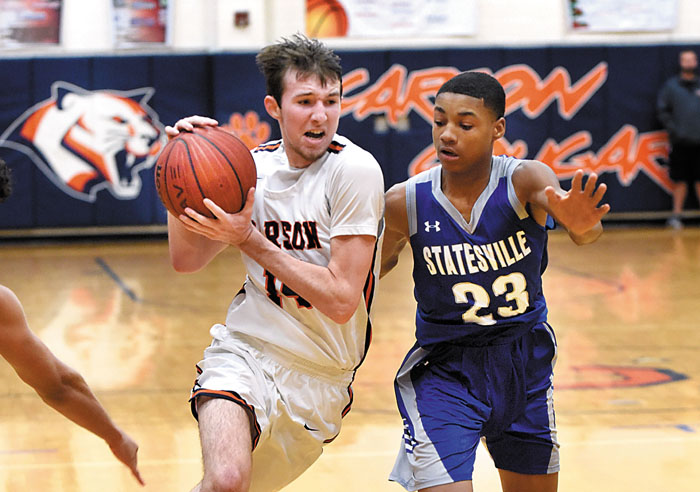 Wayne Hinshaw FILE PHOTO/for the Salisbury Post ... Carson’s Cole Perry, left, during a game last season against Statesville and Kevin Biglow (23). Perry recently announced that he will continue his education and basketball career at Southern Wesleyan University in Central, S.C.

CHINA GROVE —  Cole Perry’s story has been intriguing already — and there should be a lot more to come.

There was a torn ACL last summer. Surgery was in July. He was back on the basketball court in December. The determination he showed, the sweat and tears that went into that rapid comeback was something that only Perry and his family had a chance to see.

“Five months,” said Brian Perry, Carson’s head coach and Cole’s uncle. “He came back from an ACL so fast. He wasn’t 100 percent, he was a long way from 100 percent, but he still averaged 17 points and 7 rebounds for us. He was all-conference and all-county. I thought what he did was amazing.”

A four-year varsity player, Perry was able to play in 20 games as a senior and scored 20 or more points eight times. His last two high school outings were 25-point efforts against a good South Iredell team in Carson’s regular-season finale and in the North Piedmont Conference Tournament. Everyone knows he can shoot the 3-pointer, but he can do a lot of other things.

A 6-foot-4 guard, Perry will get a chance to keep playing, which isn’t surprising. He signed recently with Southern Wesleyan University in Central, S.C.

Southern Wesleyan was 2-26 last season and 1-17 in the league. The SWU Warriors lost their last 19 games and didn’t win a home game at 500-seat Tysinger Gymnasium all season.

Perry can help and should get a chance to help early in his career, although there’s a possibility he could redshirt his first year, so he can complete his recovery. He’s still less than a year removed from major surgery.

“Right now, I’d say I’m about 85 percent,” Perry said. “I’m still working to get everything back from the ACL. I’m not jumping quite as high. I’m not as explosive as I was.”

He is still convinced the injury made him a better player.

“I believe I got a lot smarter as a player because of the injury,” Perry said. “I watched a lot of film when I couldn’t play. I watched games with more focus from the bench. I dribble less and pass more than I used to. And I still have a lot of confidence in my shot.”

Brian Perry believes Cole may become a point guard in the long run, or at least a combo guard who can play shooting guard or point guard.

“He’s a gym rat with a lot of playmaker tendencies,” Coach Perry said. “He sees the floor well. He’s always been able to make the right pass and make the right play for his teammates.”

Nick Pasqua resigned from the head job at Tusculum back in February. Prior to that he was an assistant at King for eight seasons. Southern Wesleyan hired Pasqua, who has a reputation as an offensive-minded coach, in May. Tusculum connected on a school-record 317 3-pointers last season and scored more than 81 points per game, so Pasqua is sure to pick up the pace at Southern Wesleyan.

Perry has known Pasqua for a while. That’s how he ended up at Southern Wesleyan.

“He watched me play a lot of AAU games when he was at Tusculum,” Perry said. “He saw me play before I got hurt and he was interested in me being part of his first recruiting class for Southern Wesleyan. I visited and I liked the coaches and players and I liked the school.”

Southern Wesleyan is almost a straight shot down Interstate 85. It’s 166 miles from Salisbury, south of Greenville and north of Anderson.

So it’s about three hours away even under normal traffic conditions. .

Perry doesn’t fear distance or homesickness. He hopes he’s already put the most serious adversity he’ll ever face behind him.

“Back in July, when I got hurt, all I wanted was to have a senior basketball season, and I was able to work hard enough to make that happen,” Perry said. “Now, knowing that college basketball is going to be part of my future, I’m really excited. I’m happy.”

His career goal is to become a coach, so some of his most important “professors” at SWU are going to be his basketball coaches.

“That was a part of my decision,” Perry said. “It’s important to have good coaches to learn from.”

Drew Powell at it again in the Indoor Football…