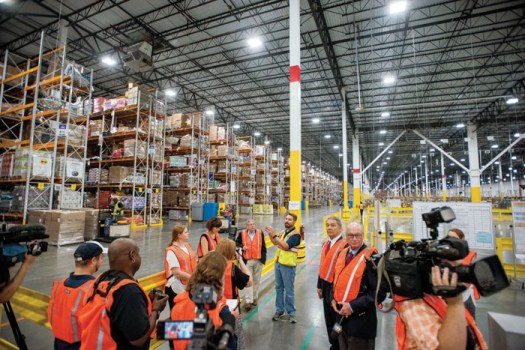 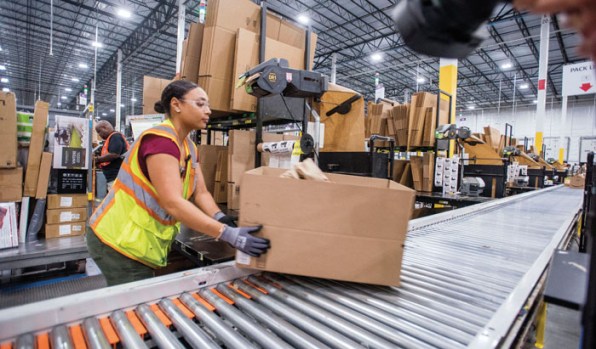 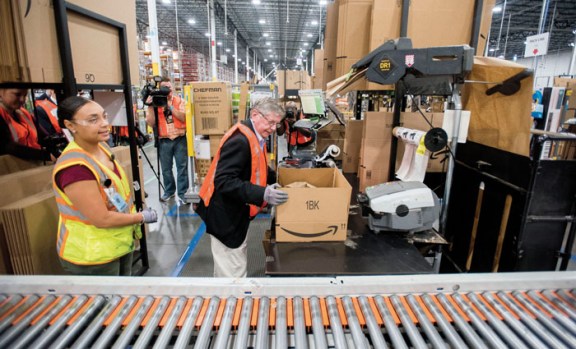 Kannapolis Mayor Darrell Hinnant was given the opportunity to pack a box for a customer. Jon C. Lakey/Salisbury Post 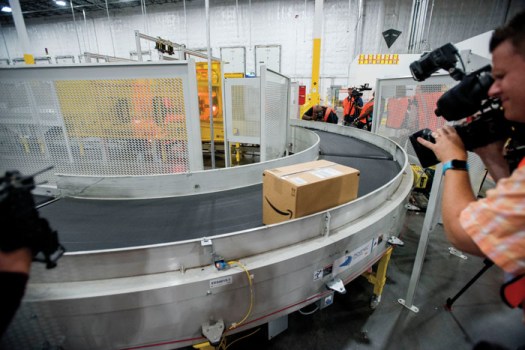 Reporters and elected officials got a chance to see the operations of the Amazon Fulfillment Center on Davidson Highway on Friday morning. Jon C. Lakey/Salisbury Post

KANNAPOLIS — Almost a year after opening, the Amazon Fulfillment Center has employed 1,000 full-time workers and invested in the community.

Amazon leaders on Friday invited elected officials and reporters for a tour of the center on Davidson Highway.

Shannon Todd, the general manager, expressed his gratitude to Kannapolis and surrounding communities for their support.

“We received such an outpouring and enthusiasm from this community and all the elected officials and partners that helped to make this facility possible,” Todd said.

Kannapolis Mayor Darrell Hinnant said the partnership between the city and Amazon has proved beneficial. He said Amazon is providing living-wage jobs and will support the future construction of two fire stations.

U.S. Rep. Richard Hudson, a Republican who represents the 8th District, said Amazon made a great decision to locate in Kannapolis and echoed the mayor’s sentiments about continuing the partnership.

Hinnant said having good-paying jobs is more than a campaign slogan. No one should have to work two or three jobs in order to make ends meet, he said.

“We’re beginning to build an opportunity around more than just a place,” Hinnant said. “It is more than just employment. It’s about a community that serves all of us.”

The starting salary at the fulfillment center is $15 per hour.

Todd said since launching operations in North Carolina — Amazon has fulfillment centers in Charlotte and Kannapolis and sorting centers in Concord and Durham — the company has dived into the communities through donations to organizations like Metrolina Food Bank and A Child’s Place.

Amazon also made a donation to support the STEM program at Kannapolis Middle School.

Hudson said not only did the fulfillment center bring good jobs but it helps local small business owners that rely on Amazon to get their products to customers.

He said other companies will see Amazon’s interest in North Carolina and start looking to invest in the state.

“It really puts us on the map,” Hudson said. “If Amazon chose this location, I think other companies will take a look at this location. And once they take a look, they’ll see all the incredible resources we have with the great community college, transportation system we have here, the growing economy and the availability of workers.”

Hudson said North Carolina has a lot to offer employers, and Amazon saw that.

“It’s safe to say we’re well positioned here in the state, and I think Amazon coming here just puts an exclamation point on that,” Hudson said. “I think the message that sends to the rest of the country is important.”

The fulfillment center will offer a career choice program that pre-pays 95% of tuition for employees who go back to school to develop skills, even if they are not related to their jobs at Amazon.

Steve Morris, chairman of the Cabarrus County commissioners, said the program is progressive because it builds a community of workers.

“It just underscores our belief that we want to benefit the community as much as we can,” Morris said.

Chewy, an online pet retailer, announced in April it would open a fulfillment center in Salisbury, bringing more than 1,200 jobs to Rowan County next year.

Todd said he is unsure of the impact Chewy would have on Amazon. The Kannapolis fulfillment center focuses on larger items, including diapers, canoes and dog food.

Hinnant said any time a business opens, it is good for the region despite possible competition.

“The fact that their business is opening up — Chewy in Salisbury — is good for us,” he said. “It means that, ‘Hey if I’m moving my business to some location, I want to move it to where others are moving to it also, because it means opportunities for employment, jobs and resources.’”

At the fulfillment center, employees pick, pack and ship products. As Todd led the tour of the 1.1-million-square-foot center, he gave Hinnant and Morris the opportunity to pack a box.

Todd called Hinnant an expert packer and asked him if he was available to stay the rest of the day.

After the tour, Hinnant joked that he would be asking if he could get a part-time job.

Though there are no plans to expand the fulfillment center in the near future, it will hire throughout the year to reach 1,000 jobs. Employees work in two 10-hour shifts.