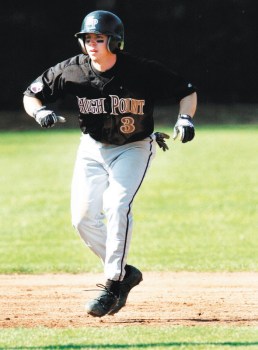 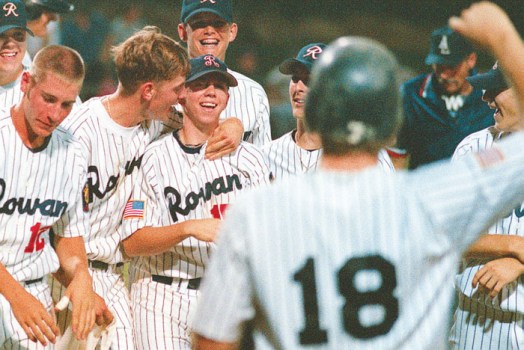 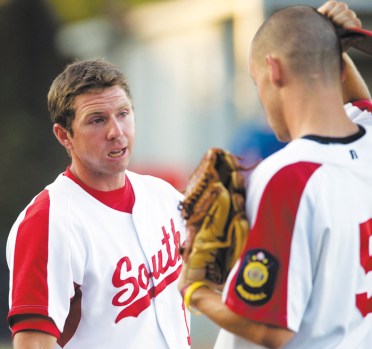 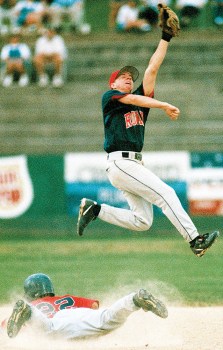 It was 24 summers ago. Lowman was 15 and was winding up his freshman year at East Rowan where he’d played on the jayvee baseball team because the varsity squad was so strong that it was headed for the 3A state championship. Gantt was assisting head coach Jim DeHart with the Rowan County American Legion team.

“Even then, when he was just a high school freshman, Michael was a student of the game,” Gantt said. “He still is.”

Lowman will turn 40 this fall. Like Gantt, he has devoted a huge chunk of his life to making the Catawba baseball program an incredible success story. Lowman was Gantt’s assistant from 2005-07. After coaching at High Point for one year, he returned to Catawba in 2009 and has been in Salisbury since then, serving as Gantt’s right-hand man.

When Catawba takes on UC San Diego today in Cary at 3 p.m., Gantt and Lowman will be taking part in their third D-II Baseball Championship. They also made it to the World Series, played at USA Baseball National Training Complex in Cary, in 2012 and 2015.

“I get a lot of the credit for Catawba winning consistently, but believe me, Michael and I coach Catawba together,” Gantt said. “He’s a huge part of our success.”

Lowman’s duties include some obvious ones, working with hitters and tutoring infielders. He was great at both of those things.

There’s also a lot of behind-the-scenes stuff that the average fan doesn’t think about.

“Meals, laundry, buses, receipts, hotels, just a lot of the day-to-day planning,” Lowman said. “Anything I can do that takes something off Jim and allows him to concentrate on managing the team, I try to do it. Jim and I have changed over the years. When I was younger, Jim was my coach, my advisor, my mentor. Now we’re friends and co-workers. We’ve both changed a lot over the years. Having kids changes you. It gives you a different perspective on life.”

Generally speaking, Gantt provides the fire for the Indians. He can get emotional. Lowman is frequently the calming influence.

“I’m not going to say it’s good cop and bad cop,” Gantt said with a laugh. “But, yeah, he calms me down sometimes. And he’s good with the players. Players are people. They’ve got girlfriends, family, school — they’ve got stuff to deal with that affects baseball. He helps them with all of that.”

Lowman was a terrific player. He was 5-foot-7, but he was a good enough athlete to start for East Rowan’s basketball team. As a second baseman and shortstop, he became one of the top players in Rowan County American Legion history. He started on the 1996 team that won the regional as the host team and went to the World Series in Oregon. By 1998, the little guy was hitting the ball out of Newman Park. He smacked 12 homers, drove in 70 runs and batted .392 that summer and was named Area III Player of the Year.

He started four years at Division I High Point University. He batted .288 for his career, amassing 195 hits, including 44 doubles. He’s still among the all-time leaders at High Point in hits, doubles and assists. He batted .336 in 2000. In 2001, he made the All-Big South first team.

“He still puts on a glove once in a while,” Catawba third baseman Jackson Raper said. “You can see that he was really good.”

Raper has become an all-region third baseman under Lowman’s guidance. He’s a strong-armed defender who can also hammer extra-base hits.

“Coach Lowman had had a lot to do with my success and worked with me a lot 1-on-1 in the fall,” Raper said. “He knows the game, obviously, but the biggest thing is he’s always positive. You can be having a bad day, but he’ll be that bright spot you need.”

“Jackson used to be really hard on himself and he lacked self-confidence,” Lowman said. “More than anything mechanical with him, we just had to get him to slow things down. We talk a lot and we talk hitting a lot, and he’s matured. He understands now that he can’t hit every pitch out of the park. He goes up there with a plan, and he’s going to take what the pitcher gives him. The improvement he’s made, the success he’s having,  I’ve had a small part in that, but he’s done the work. It didn’t just happen overnight. It’s happening because he worked on his game in the summer and the fall.”

“I’m far enough removed from my playing days that I can say that without being insecure about it,” Lowman said. “Shepherd is pretty special. Butts is a spark for us and we haven’t lost a game since he came back from an injury. Simpson is as good as anyone in the country defensively and he’s made himself a very good hitter.  Raper, Simpson and Butts are like most of our guys, they weren’t recruited by a lot of people, but they’ve developed. Everyone in our lineup can win a game for us and team chemistry is good. The importance of team chemistry can’t be overstated.”

Asked about the most underrated Catawba Indian, Lowman says that’s an easy one.

“Our catcher — Cameron Morrison,” Lowman said. “He calls every pitch. A lot of the success of our pitchers is due to him.”

Lowman has been a head coach. He coached the South Rowan American Legion team for several summers and piloted South to its first — and only — division title in 2010. That was an era when South Legion had many talented South Rowan and Carson players and could go toe-to-toe with Gantt’s Rowan County teams.

Gantt said there’s no doubt Lowman could have left to head his own college program years ago, but Lowman and his wife, Kelly, who is a teacher and exceptional distance runner, have preferred to stay in Rowan County.

Their son, Colin, is autistic, and is ready to start middle school. There’s a support system for him in place, with lots of family to help out, a baby-sitter he’s comfortable with, people and places he’s comfortable with. The Lowmans also have a daughter, Carly, who’s ready for kindergarten.

“Michael and I, we don’t see ourselves as stuck here,” Gantt said. “We’re not satisfied, but we are content. You can be really rich in your life without having a lot of money.”

Part of that richness is that Catawba’s players have become a sort of extended family for Lowman. His own son won’t be able to be a ballplayer, but he can still pass own his considerable knowledge to young players.

“It’s not like we do this for the money,” Lowman said. “I tell you why we do it. You should have seen the look on our guys’ faces when we won the regional at North Greenville. That look was sheer joy. Baseball is a lot of grinding, but the opportunity to see that joy, that’s why Jim and I do this. That’s what it’s all about for me.”

Lowman misses his father every day.

Bob Lowman, a North Carolina American Legion Hall of Famer, was a fixture at Newman Park for many years as the team manager for Rowan County American Legion. He died at 69 three years ago. Bob was immensely proud of his son’s playing and coaching accomplishments, but he also  was kind to everyone who ever played with his son or for his son.

“It’s hard to come to Newman Park and not think about my dad,” Lowman said. “I guess what I remember most is how he was constantly changing seats. If we were struggling to score, he’d change seats. I asked him once why he did that and he said he was hunting for runs.”

Working together, Gantt, Lowman and assistants Russ Weiker, Ronnie Pugh and Luke Setzer have gotten a team that finished third in the conference in the regular season to Division II’s ultimate stage.

“We’ve all helped, but Jim Gantt is still the lifeline,” Lowman said. “His work ethic and his passion for Catawba baseball are just unbelievable. That’s why we’re here.”