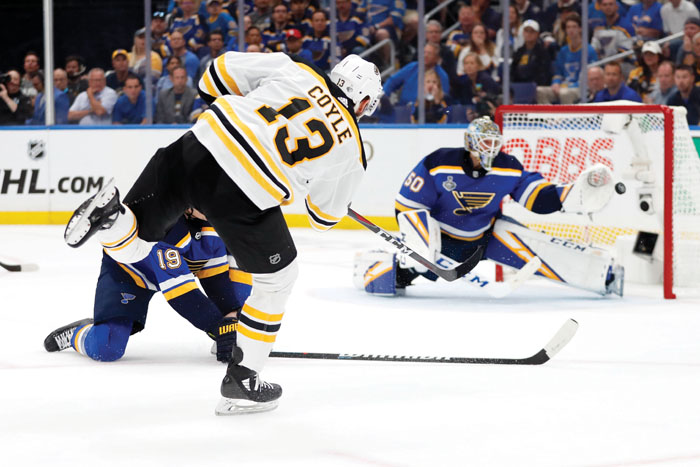 By STEPHEN WHYNO AP Hockey Writer
ST. LOUIS (AP) — Patrice Bergeron and the Boston Bruins’ best players took the criticism to heart.
They weren’t good enough through the first two games of the Stanley Cup Final and needed to be better. And they were.
The stars came out on Saturday night and led Boston to a 7-2 rout of the St. Louis Blues to take a 2-1 lead in the best-of-seven series. Bergeron and defenseman Torey Krug each scored a goal and had two assists, David Pastrnak scored his first goal of the series and the top power-play unit was a perfect 4 for 4.
Boston chased Blues goaltender Jordan Binnington, silenced actor and Blues super fan Jon Hamm and a raucous crowd that was fired up for the first Cup Final game in St. Louis in 49 years. The Bruins survived an initial onslaught and then took it to the home team.
Nothing was more important for the Bruins than the first line of Brad Marchand, Bergeron and Pastrnak getting going after no even-strength points through the first two games. They combined for five points a decidedly better effort at 5-on-5 and on the power play.
“We spent less time in our zone,” Bergeron said moments after the win. “When we do that we have more energy on offense.”
Game 4 is Monday night.
Playoff MVP front-runner Tuukka Rask was solid as usual in goal with 27 saves, and the Bruins continued to get contributions all over their lineup. Trade deadline pickup Charlie Coyle continued his hot run with his eighth goal of the playoffs, fourth-liner Sean Kuraly scored his second in three games and Marcus Johansson added goal No. 7 in the final minutes.
That recipe for success has the Bruins two victories away from their first Stanley Cup since 2011 and Boston’s third in a row in the four major North American professional sports.
The Blues came out flat and continued a troubling trend of parading to the penalty box. After being the least-penalized team through the first three rounds, the Blues took six more minors Saturday to give them 16 in the final.
Staying disciplined was coach Craig Berube’s focus given the charged atmosphere that delivered on all the hype. His players didn’t practice what he preached, and Berube’s staff even got a penalty for unsuccessfully challenging Kuraly’s goal for offside with 7.8 seconds left in the first period.
Just about everything went wrong for the Blues, who were forced to put backup Jake Allen into the game. He gave up one goal on four shots.
Binnington allowed five goals on 19 shots before getting the hook for the first time in his NHL career but will almost certainly be back in net for Game 4.
One silver lining for the Blues is they scored their first power-play goal of the series and ended Boston’s streak of 19 consecutive penalties killed.
NOTES: Bruins D John Moore made his series debut in place of concussed teammate Matt Grzelcyk. … The Blues were without suspended forward Oskar Sundqvist. Zac Sanford saw his first playoff action since April 14 in replacing Sundqvist. … Allen hadn’t played since late in the regular season, April 3 at Chicago. … Mad Men” actor Jon Hamm, “The Office” actress Jenna Fischer, ex-St. Louis Rams players Isaac Bruce and Chris Long, current Kansas City Chiefs players Patrick Mahomes and Travis Kelce, NASCAR’s Richard Petty and Bubba Wallace and retired track and field star Jackie Joyner-Kersee were among the celebrities in attendance.
UP NEXT
Sundqvist returns to the lineup for Game 4 on Monday night to give the Blues back an important grinder.
___
Follow AP Hockey Writer Stephen Whyno on Twitter at https://twitter.com/SWhyno
___
More AP NHL: https://apnews.com/NHL and https://twitter.com/AP_Sports