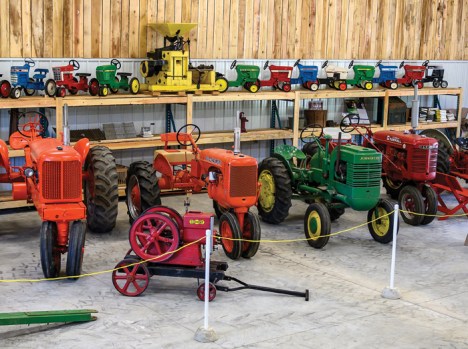 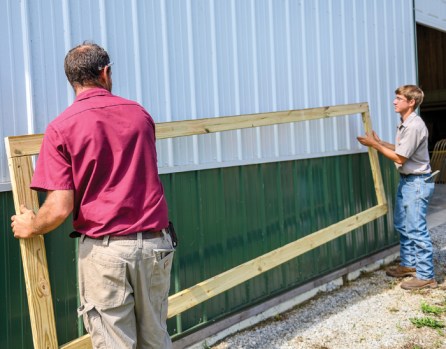 Timothy Hochstetler, left, and Daniel Hochstedler put up the first frame for the barn quilts at the Country Life Museum at Sloan Park. Bernadine Hernandez/Salisbury Post 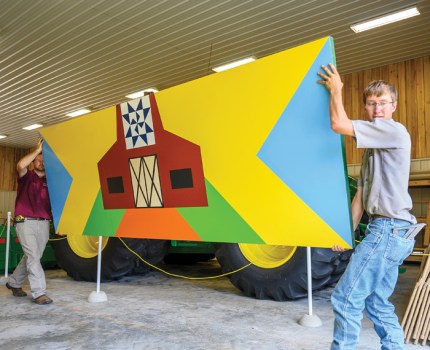 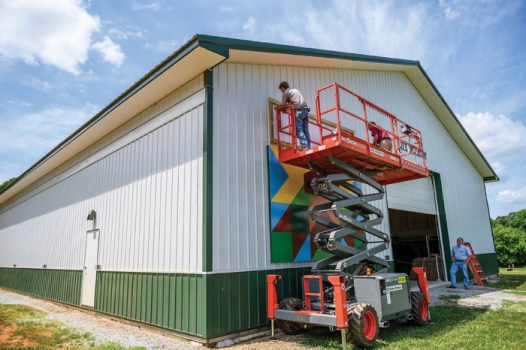 The first of two barn quilts is hung at the Country Life Museum at Sloan Park. Bernadine Hernandez/Salisbury Post 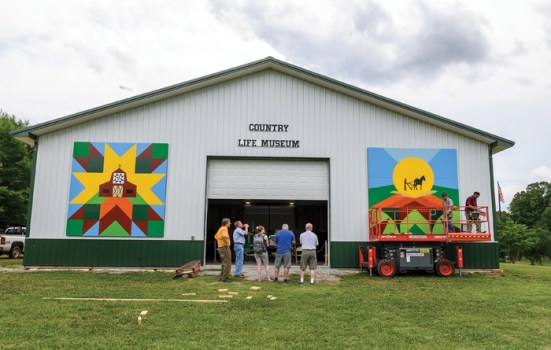 People watch as a second barn quilt is hung at the Country Life Museum at Sloan Park. Bernadine Hernandez/Salisbury Post

MILLBRIDGE — Every visit to the Country Life Museum at Sloan Park seems to reveal something new.

Inside, you see the new collection of  kids’ pedal tractors — 18 in all — displayed high along a wall.

Outside, thanks to the hard work Friday of Timothy Hochstetler and Daniel Hochstedler (yes, the spellings are different), the museum has installed two new barn quilts, highly visible from Sloan Road.

“You just added a different dynamic to the building,” Randy Elium told Timothy and Daniel after they finished securing “Tom’s Field of Dreams” on one side of the big garage door and “Old Times, Long Days” on the other.

The monstrous barn quilts, each measuring 12 feet square, will provide an easy way to find the museum, which is near the Sloan Road entrance to the park.

Elium is a founding member of the Carolina Antique Power Association, established in 1992. It has been the association’s dream for a long time to open the Country Life Museum to display antique tractors, farm equipment and other rural life artifacts and use the museum to educate present and future generations about the American farm family.

The Country Life Museum is stop No. 10 on the self-guided Rowan Arts & Ag Farm Tour this weekend. The museum, decked with its new barn quilts, will be open with other locations from 10 a.m. to 4 p.m. Saturday and 1 to 5 p.m. Sunday.

The Country Life Museum is a lunch stop featuring hot dogs with Ed Hall’s famous chili and slaw. Visitors also can buy raffle tickets for a 2-foot-square barn quilt, and the 2019 barn quilt calendars will be for sale.

Sixteen of the new pedal tractors on display at the Country Life Museum were a gift from Sue Harms, a daughter of the late Baxter and Thelma Ribelin. Thelma didn’t want to part with her husband’s pedal tractors for a long time, but eventually they went to the couple’s three daughters, and each girl received 16.

CAPA member Harry Fink said Baxter Ribelin was a collector of pedal tractors when it wasn’t necessarily a trendy thing to do. Fink and his wife, Denise, used “TLC and 409” to clean up the donated tractors.

“They were already in good shape,” Fink said. “I collect and restore them, and it did my heart good.”

The Ribelin tractors given to the museum are generally from the 1960s. Tractors such as these were first made for kids after World War II when steel was again available for something other than the war.

The steel-built models gave way to cast aluminum, and their shape, colors, decals and tires resemble real tractors from years ago.

The pedal tractors on display represent seven companies including John Deere, Massey Ferguson, Ford, White, Case, International and Kubota. Among the real antique tractors on display at the museum, you can add names such as Allis-Chalmers and Farmall.

Fink likes that all the significant parts on the pedal tractors are replaceable. Many of the parts he uses in his restorations once belonged to Baxter Ribelin.

“He didn’t throw anything away,” Fink said. “I was able to buy his gently used equipment from a relative.”

The two 12-by-12-foot barn quilts on the outside of the museum join one installed earlier this year at Patterson Farm as the largest in Rowan County — for now.

Tom Smith, the former Food Lion chief and a farmer himself, has been a key financial supporter of the Country Life Museum, and he also donated the money for the quilt that CAPA decided to name “Tom’s Field of Dreams.”

Elsie Bennett, co-owner of West Rowan Farm, Home and Garden Inc., designed both quilts. Volunteers helped in the painting, which was done at the store warehouse.

Barn quilts, which are increasingly part of the rural landscape in Rowan County, have become the chief pastime of Bennett, who has several others in the works.

She will be designing and painting a 16-square-foot barn quilt that will be installed at Carolina Malt House in Cleveland this fall.

Bennett also is spearheading work on the community barn quilt mural being created and assembled at her store. People paint individual barn quilt squares that will be part of a 487-square-foot mural to be erected on the side of the Bennetts’ store, located at N.C. 801 and Graham Road.

Bennett has punched up the size of the mural so it will be just a tad bigger than a 480-square-foot barn quilt mural in Kansas. If so, the Rowan community barn quilt mural will be the biggest in the country.

It definitely will be the biggest in the state.

“I like doing things that are different and outside the box,” Bennett said.

Imagining an aerial view of the rural farming landscape inspired the geometric patterns surrounding the barn on Tom Smith’s quilt, she noted.

The “Old Times, Long Days,” quilt carries the silhouette of a farmer following a horse and plow against the backdrop of a giant sun.

CAPA will be looking for Bennett to design two more barn quilts for the outside of the 4,800-square-foot museum.

Another 12-square-foot barn quilt will have tractors as a theme and use all the traditional company colors of well-known tractors.

The N.C. Farm Bureau, a generous supporter of the museum, will pay for that barn quilt.

David and Angela Harris are interested in sponsoring a dairy-themed, 6-square-foot quilt. The Harris family was connected to Hickory Grove Dairy, which once operated not too far from Sloan Park.

“There will be something related to Hickory Grove Dairy,” Elium promised.

Plans also are to erect two small barn quilts at N.C. 150 and Sloan Road that will be used as directional signs to the museum.

Elium said the museum already opens for a few events and CAPA meetings. He hopes volunteers can provide the manpower to offer regular museum hours on weekends.

A fundraiser is scheduled for Sept. 28. Proceeds will go toward erecting a significant size “lean-to” (a shed with a one-slope roof) on the side to provide cover for additional equipment.

Hochstetler and Hochstedler, who work for A.W. & Sons Construction, spent several hours Friday building frames and installing the heavy panels (six in all) that make up the two new barn quilts.

They donated their time. It’s the country way of doing things.