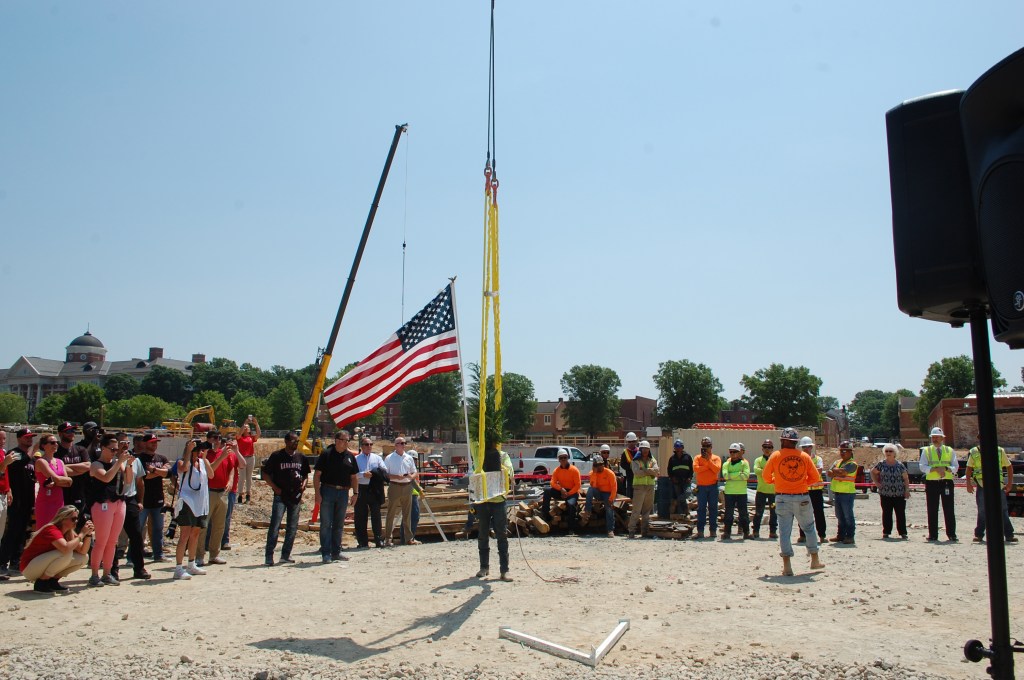 The last beam of the future Kannapolis Intimidators stadium was installed Thursday as a way to celebrate the construction workers and the progress of the stadium, expected to be completed in April 2020.

KANNAPOLIS — Every day, the future Kannapolis Intimidators stadium in downtown grows. And on Thursday, workers, city officials and the baseball team celebrated the installation of the highest beam on the stadium.

Len Moser, vice president of Barton Malow construction company, said “topping out” is significant in the industry. It means the last steel beam is added to a structure. The beam, which local residents came out to sign last week, was raised in the air with a plant to signify life being added to the building.

“We like to think of it as an expression of pride by all the workers,” Moser said. “They’ve poured their heart and soul into the building so far.”

Haley Hassler, the senior project manager of the 4,930-seat stadium, said the milestone gives the OK for other phases of construction to start. Importantly, people can begin to visualize what the home of the Intimidators will look like.

The emphasis Thursday was on the construction workers, who have been working through days of rain, cold and heat, such as Thursday as the sun baked the site at more than 90 degrees.

“Today is a thank you to the men and women working outside,” Hassler said.

The construction workers were fed a lunch of hamburgers and hot dogs catered by Smoke Pit and participated in a raffle. One worker took home a water gun.

“It’s not about us, and it’s not the city,” Hassler said. “What they’re doing is going to impact that community.”

“It’s about community,” Millward said. “They’re just as much a part of the project as we are.”

Moser said the baseball stadium will continue to transform the community.

“We’ve changed a lot of lives and a lot of lives have been impacted by this project so far, and we can’t wait to see what happens when the building is opened and we get to opening day,” Moser said.

Mayor Darrell Hinnant said the stadium is a big-time development for Kannapolis.

“It is almost every week that I get a citizen, most of them my age and older, who says, ‘I never expected this to be completed,’” Hinnant said. “’I didn’t think I could live long enough to see this thing happen.’ I tell them to just wait and it’s not going to be long. It’s not going to be a lifetime before this project gets done.”

Hassler, who lives in Mooresville, is personally excited about the baseball stadium, which is expected to be completed for opening day in April 2020.

“Minor league baseball is really about the family,” Hassler said.

As the Intimidators close out their last year at the Moose Road stadium, Millward said they are focusing on the memories fans have over the 24 years. He’s has asked fans to rate from one to 10 how excited they are about the stadium. The responses are either 10 or seven for fans who have celebrated many nights in the stadium, he said.

Hinnant expects the stadium to be an anchor bringing people downtown to enjoy baseball and also restaurants and the urban park.

“It’s going to be the kind of thing that pulls us all together and makes us a community,” Hinnant said.